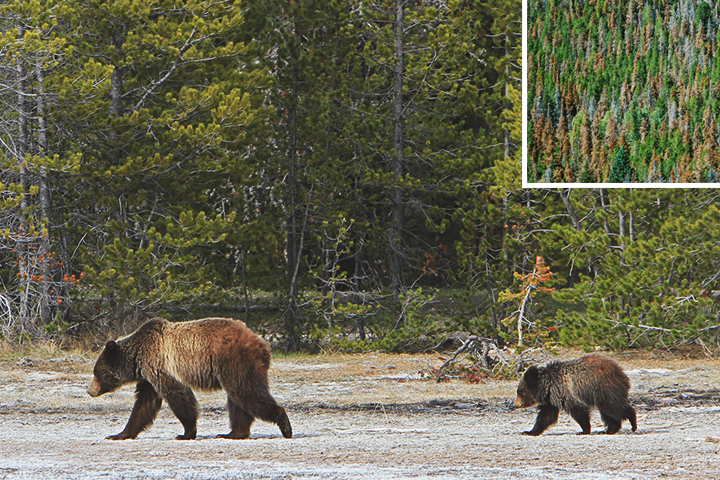 Hundreds of grizzly bears make their home in the Greater Yellowstone area. The bears are often found sauntering through whitebark pine forests. Such forests are under attack by the mountain pine beetle, which causes extensive damage to the trees (inset). (Photos by the National Park Service and the U.S. Geological Survey.)

The craggy silhouettes of iconic whitebark pines rise from the mountain ridges of Yellowstone National Park. Those trees fill a niche in the environment that was left vacant by other species. Grizzly bears share in that success, ambling through stands of the pines to gather their nutritious pine nuts.

But stands of whitebark have been suffering since about 2004. The trees have been extensively damaged by mountain pine beetles and white pine blister rust. The U.S. Forest Service has tried to combat the problem by developing and planting whitebark varieties that are more resistant to the fungus. Now, the species is further threatened by a loss of habitat as climate changes.

Andy Hansen of Montana State University is leading a research team looking at western forests the way Jantz and Rogers are surveying the east. The Great Northern Landscape Climate Cooperative encompasses almost 300 million acres in the ecosystems of the Northern Rockies, including Grand Teton, Glacier, and Yellowstone National Parks. 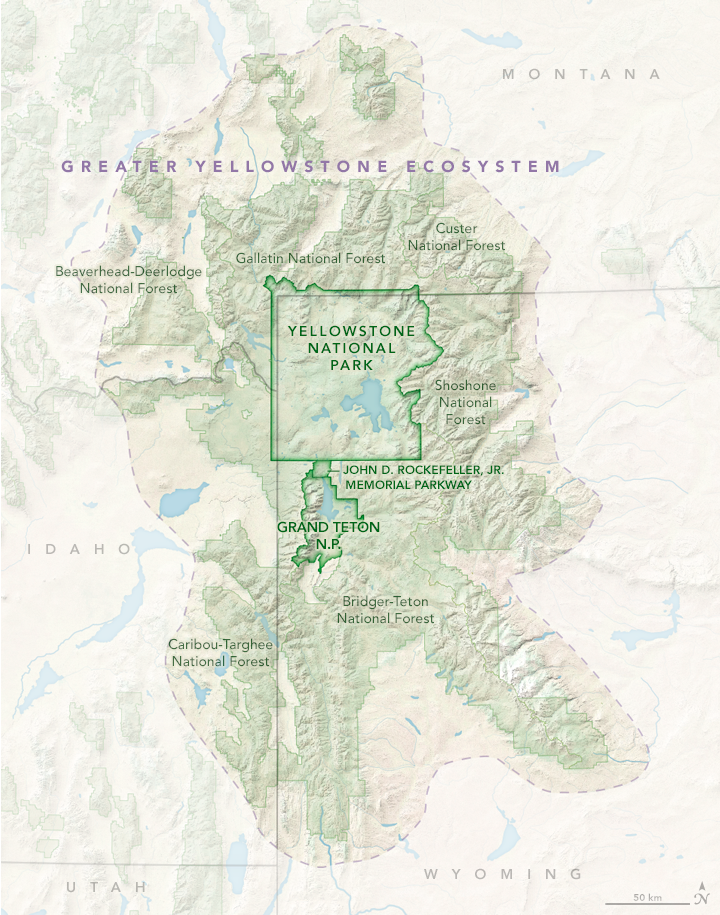 The Greater Yellowstone Ecosystem encompasses more than 89,030 square kilometers (34,375 square miles) and is one of the largest mostly intact ecosystems on Earth. Yellowstone is home to myriad plants and animals, all of which must adapt to a changing climate. (NASA Earth Observatory map by Joshua Stevens, using data from the National Park Service and the U.S. Fish and Wildlife Service.)

The parks out west are different. For instance, the greater Yellowstone area is a large, mostly intact ecosystem that was set aside for the U.S. government before much of it could be developed or cleared. This means it is theoretically easier for species to migrate as weather and climate change. But the landscape is also more extreme, with high mountain elevations and a history of drought.

Temperatures in Yellowstone have warmed substantially since 1980, and some tree species have already responded. Hansen and colleagues have started examining those ecological changes by building on the ecological forecasting capability of NASA's Terrestrial Observation and Prediction System (TOPS). Based on inputs of data on historic and projected climate, land use, and vegetation, this computer system simulates past and future ecosystem characteristics such as snow pack, soil moisture, and forest growth rates. The models cover the period from 1950 to 2100.

“TOPS outputs are a unique and important product for federal land managers,” Hansen said. “Relatively few groups have done these types of projections to begin with, and certainly not using the latest climate and statistical information for the projections.”

Climate change will alter the types and locations of important habitats. Management scenarios must reflect these changes to preserve current habitats and prepare for those that will come in the future. (NASA Earth Observatory map by Joshua Stevens, using data from the Landscape Climate Change Vulnerability Project.)

Climate projections typically have coarse resolution, telling you what is expected over a relatively large area. But Hansen and NASA Ames scientist Forrest Melton have applied a series of additional modeling steps in order to make the projections relevant at scales that work for individual parks. “We delivered sophisticated forecast data in a way that a park manager can readily grasp for his or her place,” Hansen said.

In Yellowstone, species like lodgepole pine, Douglas fir, and sub-alpine fir are all expected to lose suitable habitat. But the biggest loser will be whitebark pine. If greenhouse gases continue to accumulate, and temperatures continue to increase as much as some models suggest, the habitat for whitebark pine will rise to higher and higher elevations until the trees are just about pushed off the mountaintops. Juniper trees, by contrast, are expected to thrive and gain more suitable habitat in Yellowstone National Park.

The Landscape Climate Change Vulnerability Project can help keep the researchers and land managers focused on key questions: Where do you thin existing stands of trees? Where do you protect stands from wildfire? Where should seedlings be planted such that habitat is most suitable 50 to 100 years from now?

The effort is slow and complicated, but worthwhile. Parks are increasingly coordinating to plan for climate change, using the new tools and products derived from climate models, large-scale inventory networks from the U.S. Forest Service, and NASA satellite data.

“You’ll never find a decision of importance in the National Park System where you can simply say ‘someone did this and it led to that,’” Gross said. “The problems we’re working on are big, complicated, and involve a lot of people. We’re not at the helm of the battleship. We’re just one of a number of groups nudging it in the right direction.”