Envisioning the Future by Examining the Past

Great Smoky Mountains National Park and other forested lands of the eastern United States bear little resemblance to the past. Ice ages and human development have remade the landscape over the past several thousand years. (Photo by Justin Mier used under a Creative Commons license.)

The forests of North America have seen plenty of change in a pretty short period of time, at least geologically speaking. Up until about 18,000 years ago, the Laurentide Ice Sheet covered Canada and much of the eastern United States. When temperatures climbed and the ice sheet retreated, forests gradually reemerged. But how? Did pockets of trees find refuge in sheltered areas during the Ice Age? Or were all tree species pushed to the southern tier of the United States, only to spread north again after the ice disappeared?

Scientists still debate the topic, but one thing is clear: today’s forests in the eastern United States bear little resemblance to post-glacial forests. Starting with European colonial settlers and marching through four centuries of development, drought, and fire, the tree cover of North America became fragmented. 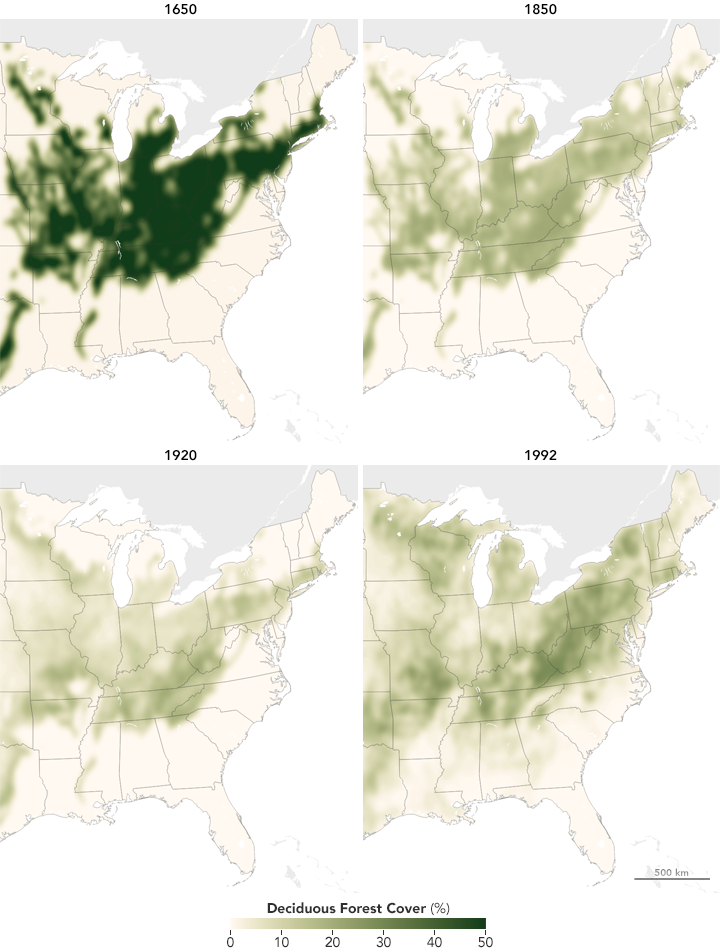 Forests in the eastern United States have been subject to both climatic and man-made pressures over time. Deciduous (leafy) tree cover has changed substantially from 1650 to the modern day. (NASA Earth Observatory maps by Joshua Stevens, using data from Steyaert and Knox (2008).)

“There are hardly any forests in the eastern U.S. that have never been cleared—maybe only a few percent,” said Jantz. “And younger, re-growing forests tend to have less structural complexity and different species assemblages.”

In many cases, National Parks were created to protect the remaining forests and their ecosystems from further destruction and fragmentation. But changes in temperature, rainfall (or snow), and atmospheric concentrations of carbon dioxide could eventually do as much to remake the forests as humans did with saws and fires and bulldozers.

Today, eastern U.S. forests are composed of a wide array of species. Some are common, like the red maple and American beech. Others are important food or habitat resources, such as black cherry and eastern hemlock. But what happens to these trees if atmospheric carbon dioxide continues to rise?

Jantz and colleague Brendan Rogers of the Woods Hole Research Center have been examining the state of current forest cover in the Appalachian region of the United States, while also modeling what the future will look like. They have been working in the Delaware Water Gap National Recreation Area (Pennsylvania and New Jersey), Shenandoah National Park (Virginia), and Great Smoky Mountains National Park (North Carolina and Tennessee). 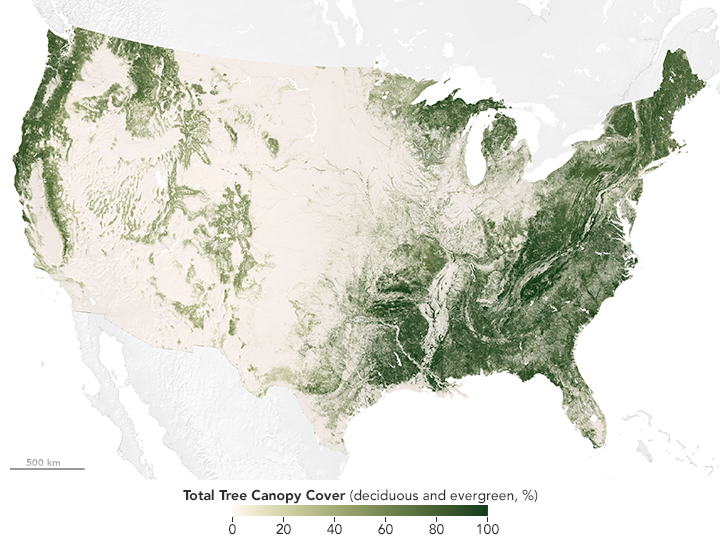 The eastern United States accounts for the majority of the country's forested land. At present, the total amount of forested land is about 70 percent of what it was in 1630. (NASA Earth Observatory map by Joshua Stevens, using data from National Land Cover Database.)

Jantz and Rogers used the output from a large number of climate models to simulate future climate conditions, assuming that carbon dioxide emissions would continue to follow the current trend—rising from 400 parts per million to 1370 parts per million by 2100. The climate models showed that warming would accelerate in all three parks. The average increase is about 0.7 to 0.8 °F (about 0.4 °C) per decade until 2040, after which warming will speed up to about 1.2 °F (0.7 °C) per decade.

Along with rising temperatures, the parks of Appalachia should see fewer days of frost, which affects the length of the growing season. Precipitation is expected to increase somewhat, but also become more variable. The combination of small precipitation increases, higher maximum temperatures in the summertime, and a lengthened growing season means the frequency of drought could increase.

Rogers notes that climate models disagree about future precipitation much more than temperature. “It is entirely possible that precipitation will decrease, which would exacerbate droughts and fire weather,” he said. “If, however, precipitation increases substantially, it could enhance growth for many trees in a warmer climate.”

By combining these climate projections with information about topography and soil moisture and composition, Jantz and Rogers are exploring how the suitability of habitats may change for 40 eastern tree species. Their modeled projections are based in part on extensive field observations collected by the U.S. Forest Service. Rogers and Jantz are combining all of this information into a comprehensive vulnerability assessment, aimed at land managers, that is designed to facilitate planning and decision making. 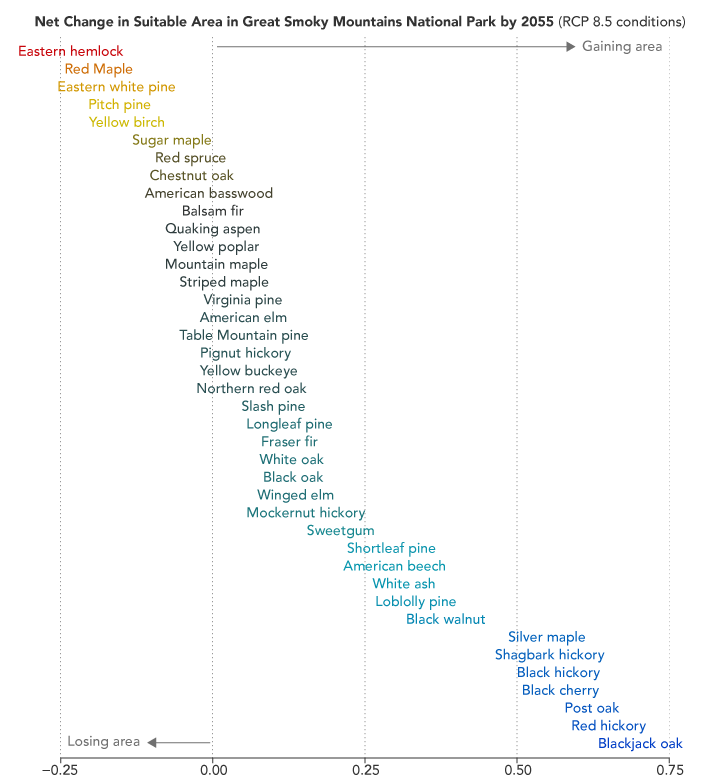 Climate change will affect each species differently. While warmer conditions are undesirable for some trees, they are more desirable to others. Over time, forest compositions will change as saplings slowly migrate with the changing conditions. (NASA Earth Observatory chart by Joshua Stevens, using data from the Landscape Climate Change Vulnerability Project.)

It turns out that sugar maple and eastern hemlock, which Jantz calls “iconic species of eastern U.S. forests,” are expected to lose habitat. Lower elevations and southern latitudes will no longer provide the cool, wet habitats preferred by these species. Other species, however, would do quite well. Blackjack oak and black hickory are expected to gain habitat in areas that become warmer and drier. High-elevation species, like red spruce and balsam fir, may effectively be pushed off the mountains.

The suitability of a landscape is just one factor in the success of a species. “If you look at the overall suitability of land, a lot of species do well,” Rogers said. “But there are other reasons that trees won’t set seed or reach maturity; for instance, the climate might change too quickly, or seeds won’t be able to disperse and establish in fragmented land. It’s humbling and disconcerting to see areas where conditions for growth could improve but the trees have little chance of getting there unless there is active management.”