Landsat 2 was launched in 1975, and Landsat 3 in 1978. Both were considered experimental, but the success of the technology prompted efforts to turn Landsat into an operational program. In 1979, President Jimmy Carter laid the groundwork to transfer the Landsat program to the National Oceanic and Atmospheric Administration (NOAA) in the U.S. Department of Commerce, changing its status from a research program to an operational monitoring program. Landsat 4 was launched in 1982 and Landsat 5 in 1984—the same year that Congress passed a law commercializing the program. 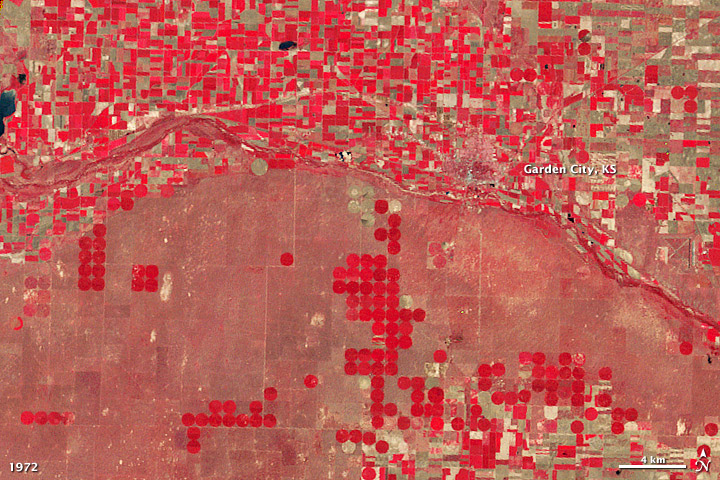 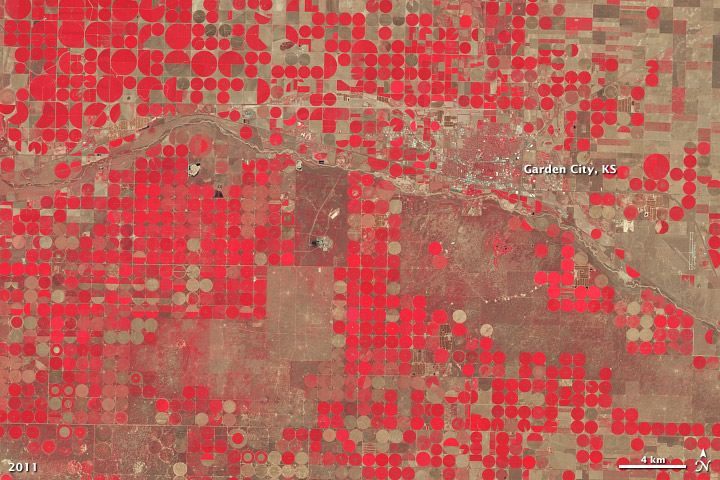 These images from 1972 and 2011 show the transformation of agriculture near Garden City, Kansas from rectangular fields with traditional irrigation to circular fields irrigated with central-pivot systems. In false-color, vegetation is red and bare ground is brown. (NASA images by Robert Simmon, using Landsat data from the USGS Global Visualization Viewer.)

A year later, the newly created Earth Observation Satellite Co. (EOSAT), took over the operations of Landsat 4 and 5. But commercialization proved to be unworkable. The need recover its costs from users had forced NOAA to dramatically raise Landsat data prices (as much as 600 percent for some products). By the time EOSAT took over, cost increases had driven away all but the largest customers (principally the military and the oil and mining companies). Image acquisition became more customer-driven, resulting in more limited coverage.

Bad luck continued. In 1987, the main radio transmitter on Landsat 5 failed. Without a data recorder on the satellite, it seemed like it might be impossible to download data from outside the U.S. In 1989, funding shortages forced NOAA to order EOSAT to prepare to turn off the two remaining satellites.

But things began to turn around. On Landsat 5, mission operators worked out plans with colleagues in Australia and several other nations to downlink the data remotely and send it back to the U.S. This network of stations allowed Landsat 5 to acquire considerable data outside of North America. The Administration of President Bush also found the funds to keep Landsat 4 and 5 operational—a good thing, because Landsat 6 failed upon launch in 1993 and ended up in the Indian Ocean. 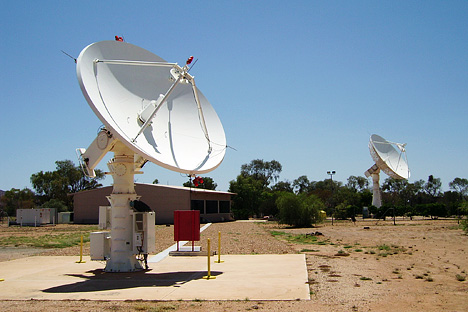 The Alice Springs data acquisition facility in central Australia is one of the many receiving stations that allow Landsat data to be collected internationally. [Photograph by Mike Pasfield, Geoscience Australia. Creative Commons attribution (CC BY 3.0), Commonwealth of Australia]

Amidst the turmoil, Congress passed the Land Remote Sensing Policy Act. The 1992 legislation returned operation of the program to the government and authorized the launch of Landsat 7, a satellite that would be entirely government owned and operated. The U.S. Geological Survey was charged with distributing the data at government (nonprofit) rates. Today, the USGS distributes Landsat data over the Internet for free, and usage has exploded.

Despite all of the ups and downs, Landsat 5 and 7 operated far beyond their designed lives. The Thematic Mapper (TM) on Landsat 5 only recently gave out after 27 years of imaging; around the same time as TM shut down, operators managed to turn the Multispectral Scanner System (MSS) back on after years of dormancy. Landsat 7 continues its work as well, 13 years after launch.

The eighth satellite, dubbed the Landsat Data Continuity Mission (LDCM), is scheduled for launch in 2013. It will be the next chapter for the longest-operating Earth-observing program in the world.