The original motivation for making low-light Earth observations was practical: military meteorologists wanted to track clouds and storms, smoke plumes, and dust storms at all hours. The Air Force, in particular, needed to provide more accurate and timely forecasts for pilots working at night both over land and at sea.

If combined with thermal (infrared) observations, visible images of moonlit skies can be extremely useful in characterizing the nighttime environment. Clouds are always changing, and there are certain kinds that are more prominent during the night. For instance, fog is more likely to form at night, when the air and surface are cooling and moisture condenses. Convective clouds and thunderstorms tend to form during the day as the Sun heats the surface and destabilizes the lower atmosphere. The properties and distributions of many clouds change rapidly in the transition from sunlight to darkness. 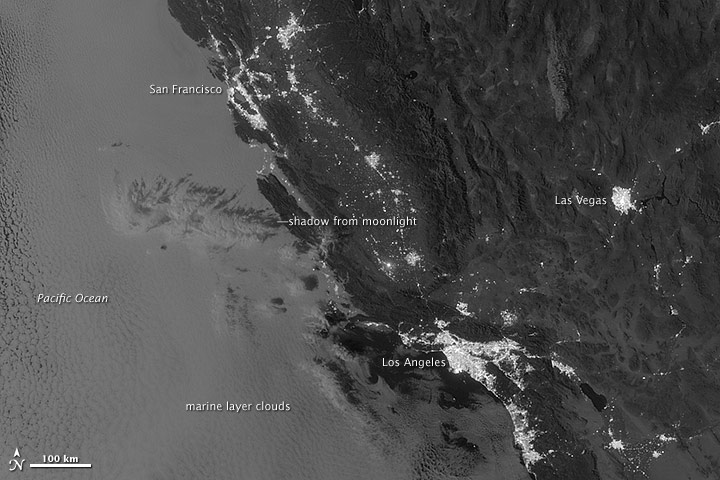 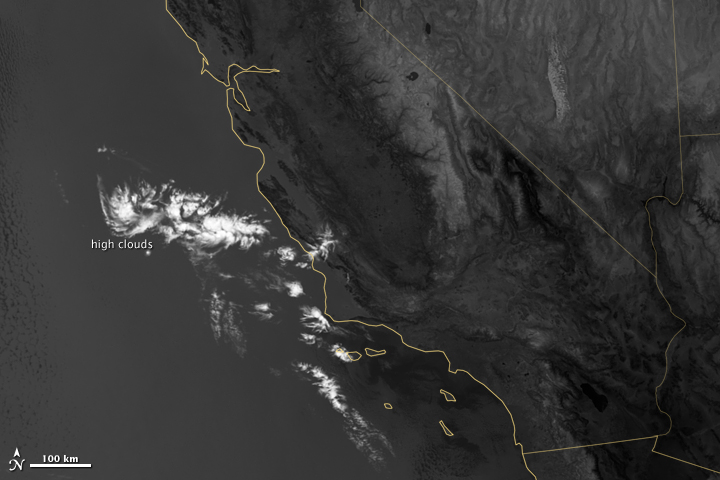 Clouds are critical for understanding both daily weather and the long-term climate. As Miller points out, measuring cloud properties — such as water content and particle size — is relatively easy to do during the daytime, but not so much at night.

Since the 1960s, the U.S. Air Force has operated the Defense Meteorological Satellite Program (DMSP), a series of 18 polar-orbiting satellites that observe clouds and other weather variables in key wavelengths of infrared and visible light. Since 1972, the DMSP satellites have included the Operational Linescan System (OLS), which gives weather forecasters some ability to see in the dark. It has been a highly successful sensor, but it is dependent on older technology with lower resolution than most scientists would like. And for many years, DMSP data were classified.

Since just a few civilian scientists have had access to nighttime data over the years, the atmospheric science community was eager to have a night-vision tool of its own. The VIIRS instrument and its day-night band was the answer.

In April 2012, VIIRS spotted waves rippling through the faint airglow in the upper atmosphere over Texas. The waves were provoked by a massive thunderstorm. (View Large Image - NASA Earth Observatory and NOAA National Geophysical Data Center)

“For all the reasons that we need to see the Earth during the day, we also need to see the Earth at night,” says Miller, who started working with DMSP data for the Naval Research Laboratory during the wars in Afghanistan and Iraq. “Visible light information provides a unique ability to detect and characterize atmospheric and surface features that confound thermal emission-based measurements. Unlike humans, the Earth never sleeps; it’s constantly moving, evolving, building up here, and tearing down there. There are many things happening on the nighttime side that we don’t understand because of limited observations.”

“The use of the day-night band by the National Weather Service is growing,” says Mitch Goldberg, NOAA’s program scientist for the Joint Polar Satellite System (including Suomi NPP). “For example, the NWS forecast office in Monterey, California, is now using the day-night band’s exceptional spatial resolution and contiguous coverage to provide higher confidence in issuing marine dense fog advisories.” 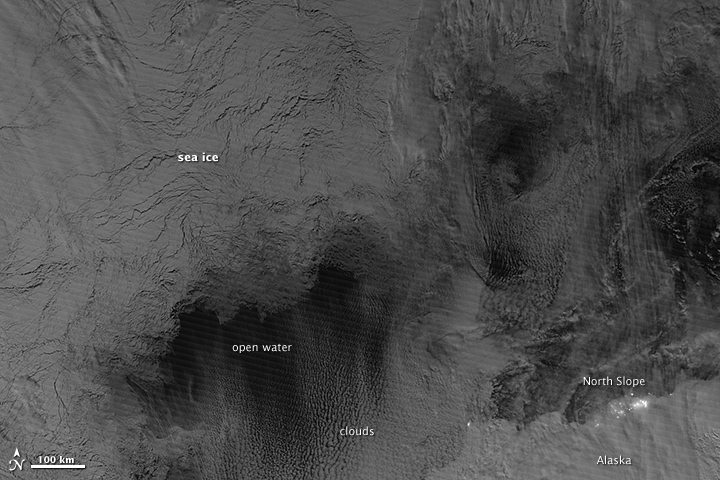 The day-night band uses moonlight, airglow, zodiacal light, and starlight to detect changes in clouds, snow cover, and sea ice in the Arctic. This is an important tool for meteorologists who do not have access to daylight imagery during the long polar night. (View Large Image - NASA Earth Observatory and NOAA National Geophysical Data Center)

Nighttime observations are particularly valuable to people living at high latitudes. Many weather satellites are parked in geostationary orbit over the equator, and the polar regions are far off on the fringes of what they can see. Most other earth-observing satellites only provide visible observations during the daylight portions of their orbits. But the ground tracks of the polar-orbiting Suomi NPP overlap at high latitudes, providing multiple observations and measurements per day of moonlit clouds, sea ice, snow cover, and open waterways for people whose winter nights can last for months.

“As a new capability, I thought everyone would be impressed with the VIIRS day-night band,” says James Gleason, NASA’s project scientist for Suomi NPP. “But the remarkable images and the community response to them has exceeded my pre-launch expectations.”