“IceBridge exists because we need to understand how much ice the Greenland and Antarctic ice sheets will contribute to sea level rise over the next couple of decades,” says project scientist Michael Studinger. “In order to do this, we need to measure how much the ice surface elevation is changing from year to year.”

The second major goal of IceBridge, says Wagner, is to track how Arctic sea ice is changing, which will help scientists understand its critical role in climate and weather. 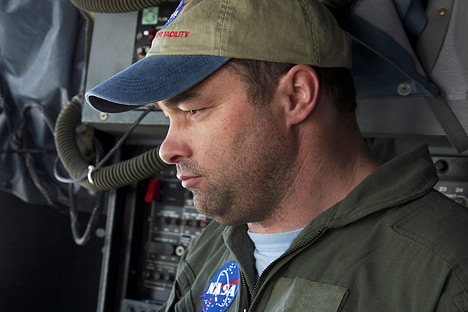 Such measurements began three decades ago with laser altimeters flown on airplanes, and then expanded with the launch of ICESat in 2003. Its main instrument, the Geoscience Laser Altimeter System, or GLAS, worked by sending out short pulses (40 per second) of green and infrared light. The light bounced off particles in the atmosphere or on Earth’s surface and returned to a one-meter wide telescope. The amount of light that returned, and the time it took to return, depended on the height of the surface that reflected it. For instance, high ice clouds reflected light faster than ice on the ground or ocean.

The measurements gave scientists a picture of the elevation of Earth’s ice sheets and the thickness of Arctic sea ice. Repeated measurements, year after year, completed the picture of how ice was changing and where the biggest changes were happening.

But ICESat was turned off in 2009 when its last laser stopped working, just as plans were developing to launch a second ICESat in 2016. To bridge the gap between the two missions, NASA returned to laser altimeters on airplanes and set up IceBridge. The first series of flights flew over Antarctica in October and November 2009, and the team has flown annual campaigns over the Arctic and Antarctic ever since.

The laser altimeters on IceBridge—the Airborne Topographic Mapper (ATM) and the Laser Vegetation Ice Sensor, or LVIS (pronounced elvis)—can measure the shape and height of the ice surface to within 10 centimeters. The ATM is similar to the ICESat laser altimeter, and has been flown on surveys of Greenland every year since 1993. 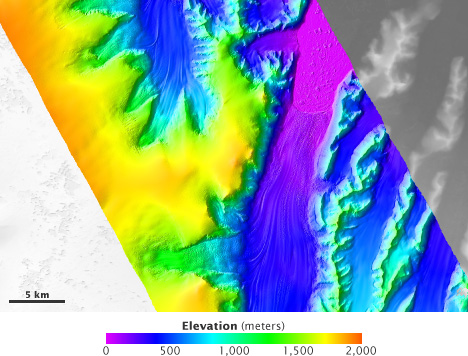 LVIS was originally built a decade ago to study vegetation. It flies at high elevations—more than ten kilometers (six miles) up—to measure large areas. LVIS records not only the time the laser takes to bounce back, but also the way the light is distorted when it returns. This helps scientists figure out the shape of rough surfaces.

IceBridge carries more than laser altimeters. “The biggest contribution from IceBridge will be the integrated analysis of a suite of cutting-edge instruments,” says Studinger. “We are flying eight different instruments on the P-3, and are collecting data that you typically can’t collect from a satellite.” 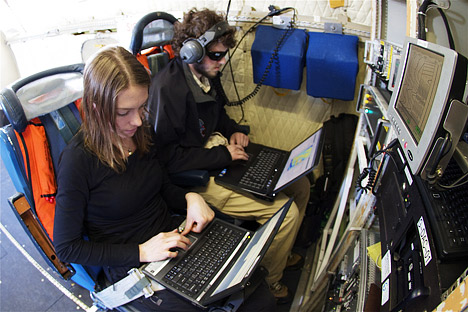 Researchers monitored instruments aboard the NASA P-3 as it flew above Greenland in spring, 2011. [Photograph courtesy Jefferson Beck, NASA GSFC]

The instruments on IceBridge include a gravimeter, a magnetometer, a digital camera, and a collection of radar instruments. The gravimeter, provided by Columbia University, records minute variations in gravity to map the ocean floor along the edge of the ice. The magnetometer measures variations in Earth’s magnetic field, which will help scientists map the seafloor geology beneath the ice and water, since some rocks are stronger magnets than others. The Digital Mapping System is set up to take very high-resolution photographs of the landscape beneath the plane throughout each flight. 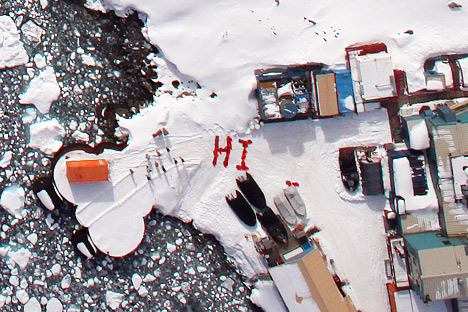 The radar instruments, provided by the University of Kansas, bounce radio waves off the ice to measure its elevation and shape. The snow radar, the only instrument of its kind, records in fine detail the depth of fresh snow on top of the ice. The Multichannel Coherent Radar Depth Sounder, on the other hand, penetrates the ice to map the shape of the ground beneath it.

The Ku-Band Radar Altimeter sees through the fresh snow to locate the ice surface. The altimeter, when combined with the ATM and LVIS laser altimeters, helps scientists correlate measurements from the European Space Agency’s CryoSat to the ICESat elevation record.

CryoSat-2 uses a radar altimeter to penetrate the ice and measure a different surface than the laser on ICESat. The differences between the two methods kept scientists from knowing how to link the two records. But since laser and radar altimeters are making measurements simultaneously on IceBridge, the mission offers a type of Rosetta Stone to relate ICESat observations to those from CryoSat-2 and ICESat-2.

“If we tie all of these different time-series together, from the airborne platform to the satellites,” says Studinger, “we can see how ice sheets and sea ice change over several decades.”