Researchers aren’t just interested in land surface heating for the trivia. Land surface temperatures are directly related to human development of the land.

“The hottest temperatures were observed at locations without vegetation,” writes climatologist Roger Pielke Sr. of the Cooperative Institute for Research in Environmental Sciences at the University of Colorado. “This means that if landscape change in a region results in less vegetation, the maximum surface temperatures are expected to be hotter. If an oasis is developed by irrigation from subsurface water in a desert, the maximum temperatures would be less.”

For a case study, Running, Mildrexler, and Zhao took an intensive look at the Pacific Northwest of the United States. “In the Pacific Northwest, there is a spectacular ecological gradient of biomes and temperatures from coast to rainforest to desert within a few hundred miles,” says Running. It is a near-perfect location to demonstrate how land cover relates the capacity of the surface to absorb and radiate heat.

Satellite images show the relationship between the characteristics of a landscape, and day and night surface skin temperature. Heavily forested areas remain relatively cool throughout the day, while barren and arid areas can be tens of degrees warmer. These images were acquired in the early morning and afternoon of July 6, 2011. (NASA images by Jesse Allen and Robert Simmon, using MODIS data.)

In densely forested areas near the coast, land surface temperatures and air temperatures are a close match because trees can use their deep root systems to access soil moisture and cool themselves through evaporation (a process called transpiration). But move east into the farmland and grassland—where there is less soil moisture during the hottest times of year and the plants have much shallower roots—and the temperature readings start to diverge. Finally, the rocky inland deserts heat up spectacularly compared to the coast; they also cool spectacularly at night.

Mildrexler and Running see long-term records of LSTs as a potential tool for monitoring land cover change, particularly through deforestation, urban sprawl, and agricultural irrigation. Put simply: if skin temperatures are rising or falling over time, it could be an indication of a change in land use.

“During the highest temperatures of the year, forests are much cooler than cleared land, so if a forest is cut down, the land surface temperature will go up,” they wrote in 2011 in the Bulletin of the American Meteorological Society. “This can be seen in the Amazon. In other locations, irrigated crops are cooler than natural vegetation because they have more water to draw upon, and cool themselves through evaporation.”

But LSTs also reveal a lot about our increasingly urban life. As Stuart Gaffin notes: “I see surface temperatures in the city that routinely exceed what you might find in the desert.”

Cities are often much warmer than the surrounding landscape. This effect, called the urban heat island, is caused by removal of vegetation and construction of dark surfaces, like asphalt pavement and tar-paper roofs. (Map by Jesse Allen and Robert Simmon, using Landsat 7 data from the USGS Global Visualization Viewer.)

The resolution of most satellite sensors— the area depicted within each pixel of an image—is too coarse to observe LSTs in the tight and variable confines of a city. In the University of Montana study, for instance, the LST data had a spatial resolution of approximately 5.6 square kilometers. When viewed through a pixel of that size, cities contain a lot of shadows from buildings and vegetation that result in lower LSTs compared to a uniformly hot desert.

So Gaffin uses portable infrared radiometers—similar to the MODIS instruments—to measure surface temperatures in New York City. They have observed LSTs on the black tar-paper rooftops of the city between 77 to 82°C (170 to 180°F) in mid-summer, amplifying the oppressiveness of summer by radiating extra heat both by day and at night. Even in winter, rooftop temperatures can be tens of degrees warmer than local air temperatures. 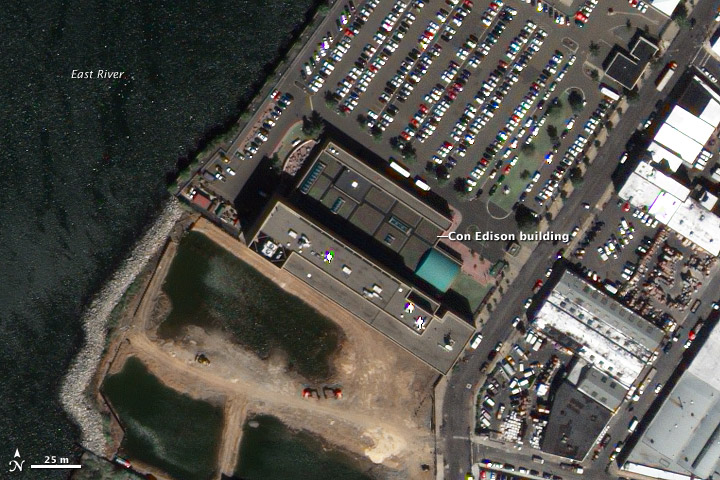 Temperatures in cities can rival the hottest desert. Using sensors installed at the Con Edison building in Queens, NY, scientists compare the surface temperature of black, white, and “green” (vegetated) roofs. The black roof can be up to 30°C (54°F) hotter than a green or white roof. (Images by Robert Simmon, using data ©2010 DigitalGlobe (image) and from the Columbia University Center for Climate Systems Research (graph).)

Gaffin is particularly interested in how rooftops and other flat, impervious surfaces concentrate heat, and in how they can be made to reflect more. The city has more than 77 square kilometers (30 square miles) of roof space that qualifies as “tar beaches.” It also has been blooming with new synthetic grass fields that mimic real grass and soil in dark color and texture, but don’t mimic the most important quality: the capacity to store and release water. Synthetic fields are like deserts in the city, with no moisture to cool the surface, so temperatures on these fields can approach the skin-burning levels of black pavement.

Gaffin and colleagues have been working for nearly a decade to find creative solutions to reduce heat island effects and LSTs in cities, such as resurfacing rooftops with white paint or with low-maintenance, lightweight vegetation. It is a matter of energy conservation and of quality of life. Rising LSTs lead to higher air temperatures, and a city that cooks itself through heat absorption has to spend more money and energy to cool itself.

Although installing a green, plant-covered roof is the ultimate technique to combat urban heat, even a simple step like painting black roofs white can reduce temperatures dramatically. This photograph shows the green roof and instrumentation on top of the Queens Con Edison building. (Photograph ©2008 Con Edison of New York.)

“About 3.5 billion people now live in cities,” Gaffin notes. “We have two forces—urban heat islands and global warming—that are reinforcing each other and are going to create periodic, extreme conditions for more than half the world’s population. How do we make cities more habitable in the future?”