How Much More Will Earth Warm?

To further explore the causes and effects of global warming and to predict future warming, scientists build climate models—computer simulations of the climate system. Climate models are designed to simulate the responses and interactions of the oceans and atmosphere, and to account for changes to the land surface, both natural and human-induced. They comply with fundamental laws of physics—conservation of energy, mass, and momentum—and account for dozens of factors that influence Earth’s climate.

Though the models are complicated, rigorous tests with real-world data hone them into powerful tools that allow scientists to explore our understanding of climate in ways not otherwise possible. By experimenting with the models—removing greenhouse gases emitted by the burning of fossil fuels or changing the intensity of the Sun to see how each influences the climate—scientists use the models to better understand Earth’s current climate and to predict future climate.

Model simulations by the Intergovernmental Panel on Climate Change estimate that Earth will warm between two and six degrees Celsius over the next century, depending on how fast carbon dioxide emissions grow. Scenarios that assume that people will burn more and more fossil fuel provide the estimates in the top end of the temperature range, while scenarios that assume that greenhouse gas emissions will grow slowly give lower temperature predictions. The orange line provides an estimate of global temperatures if greenhouse gases stayed at year 2000 levels. (©2007 IPCC WG1 AR-4.)

Greenhouse gases are only part of the story when it comes to global warming. Changes to one part of the climate system can cause additional changes to the way the planet absorbs or reflects energy. These secondary changes are called climate feedbacks, and they could more than double the amount of warming caused by carbon dioxide alone. The primary feedbacks are due to snow and ice, water vapor, clouds, and the carbon cycle.

Perhaps the most well known feedback comes from melting snow and ice in the Northern Hemisphere. Warming temperatures are already melting a growing percentage of Arctic sea ice, exposing dark ocean water during the perpetual sunlight of summer. Snow cover on land is also dwindling in many areas. In the absence of snow and ice, these areas go from having bright, sunlight-reflecting surfaces that cool the planet to having dark, sunlight-absorbing surfaces that bring more energy into the Earth system and cause more warming. 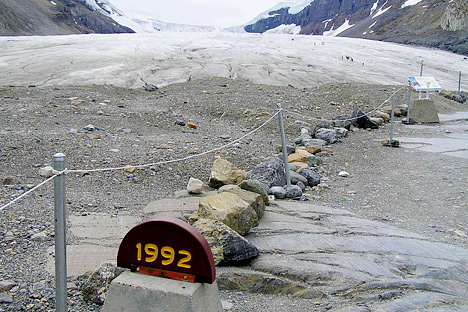 Canada’s Athabasca Glacier has been shrinking by about 15 meters per year. In the past 125 years, the glacier has lost half its volume and has retreated more than 1.5 kilometers. As glaciers retreat, sea ice disappears, and snow melts earlier in the spring, the Earth absorbs more sunlight than it would if the reflective snow and ice remained. (Photograph ©2005 Hugh Saxby.)

Closely related to the water vapor feedback is the cloud feedback. Clouds cause cooling by reflecting solar energy, but they also cause warming by absorbing infrared energy (like greenhouse gases) from the surface when they are over areas that are warmer than they are. In our current climate, clouds have a cooling effect overall, but that could change in a warmer environment.

Clouds can both cool the planet (by reflecting visible light from the sun) and warm the planet (by absorbing heat radiation emitted by the surface). On balance, clouds slightly cool the Earth. (NASA Astronaut Photograph STS31-E-9552 courtesy Johnson space Center Earth Observations Lab.)

If clouds become brighter, or the geographical extent of bright clouds expands, they will tend to cool Earth’s surface. Clouds can become brighter if more moisture converges in a particular region or if more fine particles (aerosols) enter the air. If fewer bright clouds form, it will contribute to warming from the cloud feedback.

Clouds, like greenhouse gases, also absorb and re-emit infrared energy. Low, warm clouds emit more energy than high, cold clouds. However, in many parts of the world, energy emitted by low clouds can be absorbed by the abundant water vapor above them. Further, low clouds often have nearly the same temperatures as the Earth’s surface, and so emit similar amounts of infrared energy. In a world without low clouds, the amount of emitted infrared energy escaping to space would not be too different from a world with low clouds. 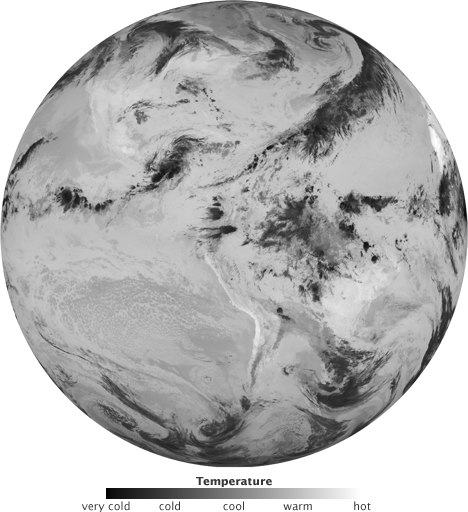 High cold clouds, however, form in a part of the atmosphere where energy-absorbing water vapor is scarce. These clouds trap (absorb) energy coming from the lower atmosphere, and emit little energy to space because of their frigid temperatures. In a world with high clouds, a significant amount of energy that would otherwise escape to space is captured in the atmosphere. As a result, global temperatures are higher than in a world without high clouds.

If warmer temperatures result in a greater amount of high clouds, then less infrared energy will be emitted to space. In other words, more high clouds would enhance the greenhouse effect, reducing the Earth’s capability to cool and causing temperatures to warm.

See Clouds and Radiation for a more complete description.

Scientists aren’t entirely sure where and to what degree clouds will end up amplifying or moderating warming, but most climate models predict a slight overall positive feedback or amplification of warming due to a reduction in low cloud cover. A recent observational study found that fewer low, dense clouds formed over a region in the Pacific Ocean when temperatures warmed, suggesting a positive cloud feedback in this region as the models predicted. Such direct observational evidence is limited, however, and clouds remain the biggest source of uncertainty--apart from human choices to control greenhouse gases—in predicting how much the climate will change. 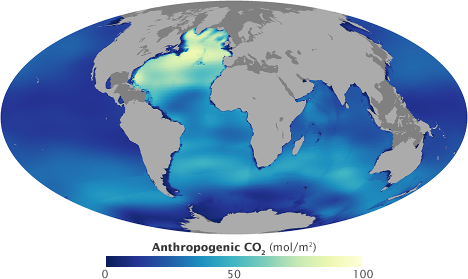 About half the carbon dioxide emitted into the air from burning fossil fuels dissolves in the ocean. This map shows the total amount of human-made carbon dioxide in ocean water from the surface to the sea floor. Blue areas have low amounts, while yellow regions are rich in anthropogenic carbon dioxide. High amounts occur where currents carry the carbon-dioxide-rich surface water into the ocean depths. (Map adapted from Sabine et al., 2004.)

See The Ocean’s Carbon Balance on the Earth Observatory.

On land, changes in the carbon cycle are more complicated. Under a warmer climate, soils, especially thawing Arctic tundra, could release trapped carbon dioxide or methane to the atmosphere. Increased fire frequency and insect infestations also release more carbon as trees burn or die and decay.

On the other hand, extra carbon dioxide can stimulate plant growth in some ecosystems, allowing these plants to take additional carbon out of the atmosphere. However, this effect may be reduced when plant growth is limited by water, nitrogen, and temperature. This effect may also diminish as carbon dioxide increases to levels that become saturating for photosynthesis. Because of these complications, it is not clear how much additional carbon dioxide plants can take out of the atmosphere and how long they could continue to do so.

The impact of climate change on the land carbon cycle is extremely complex, but on balance, land carbon sinks will become less efficient as plants reach saturation, where they can no longer take up additional carbon dioxide, and other limitations on growth occur, and as land starts to add more carbon to the atmosphere from warming soil, fires, and insect infestations. This will result in a faster increase in atmospheric carbon dioxide and more rapid global warming. In some climate models, carbon cycle feedbacks from both land and ocean add more than a degree Celsius to global temperatures by 2100.

Scientists predict the range of likely temperature increase by running many possible future scenarios through climate models. Although some of the uncertainty in climate forecasts comes from imperfect knowledge of climate feedbacks, the most significant source of uncertainty in these predictions is that scientists don’t know what choices people will make to control greenhouse gas emissions.

The higher estimates are made on the assumption that the entire world will continue using more and more fossil fuel per capita, a scenario scientists call “business-as-usual.” More modest estimates come from scenarios in which environmentally friendly technologies such as fuel cells, solar panels, and wind energy replace much of today’s fossil fuel combustion.

It takes decades to centuries for Earth to fully react to increases in greenhouse gases. Carbon dioxide, among other greenhouse gases, will remain in the atmosphere long after emissions are reduced, contributing to continuing warming. In addition, as Earth has warmed, much of the excess energy has gone into heating the upper layers of the ocean. Like a hot water bottle on a cold night, the heated ocean will continue warming the lower atmosphere well after greenhouse gases have stopped increasing.

These considerations mean that people won’t immediately see the impact of reduced greenhouse gas emissions. Even if greenhouse gas concentrations stabilized today, the planet would continue to warm by about 0.6°C over the next century because of greenhouses gases already in the atmosphere.