In Earth’s history before the Industrial Revolution, Earth’s climate changed due to natural causes not related to human activity. Most often, global climate has changed because of variations in sunlight. Tiny wobbles in Earth’s orbit altered when and where sunlight falls on Earth’s surface. Variations in the Sun itself have alternately increased and decreased the amount of solar energy reaching Earth. Volcanic eruptions have generated particles that reflect sunlight, brightening the planet and cooling the climate. Volcanic activity has also, in the deep past, increased greenhouse gases over millions of years, contributing to episodes of global warming.

A biographical sketch of Milutin Milankovitch describes how changes in Earth’s orbit affects its climate.

These natural causes are still in play today, but their influence is too small or they occur too slowly to explain the rapid warming seen in recent decades. We know this because scientists closely monitor the natural and human activities that influence climate with a fleet of satellites and surface instruments.

On the ground, many agencies and nations support networks of weather and climate-monitoring stations that maintain temperature, rainfall, and snow depth records, and buoys that measure surface water and deep ocean temperatures. Taken together, these measurements provide an ever-improving record of both natural events and human activity for the past 150 years.

Scientists integrate these measurements into climate models to recreate temperatures recorded over the past 150 years. Climate model simulations that consider only natural solar variability and volcanic aerosols since 1750—omitting observed increases in greenhouse gases—are able to fit the observations of global temperatures only up until about 1950. After that point, the decadal trend in global surface warming cannot be explained without including the contribution of the greenhouse gases added by humans.

Though people have had the largest impact on our climate since 1950, natural changes to Earth’s climate have also occurred in recent times. For example, two major volcanic eruptions, El Chichon in 1982 and Pinatubo in 1991, pumped sulfur dioxide gas high into the atmosphere. The gas was converted into tiny particles that lingered for more than a year, reflecting sunlight and shading Earth’s surface. Temperatures across the globe dipped for two to three years. 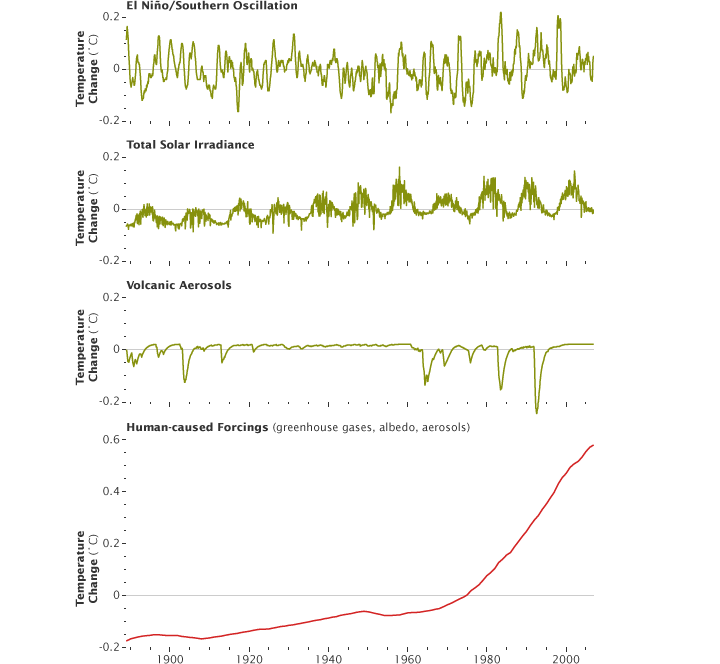 Although Earth’s temperature fluctuates naturally, human influence on climate has eclipsed the magnitude of natural temperature changes over the past 120 years. Natural influences on temperature—El Niño, solar variability, and volcanic aerosols—have varied approximately plus and minus 0.2° C (0.4° F), (averaging to about zero), while human influences have contributed roughly 0.8° C (1° F) of warming since 1889. (Graphs adapted from Lean et al., 2008.)

Changes in the brightness of the Sun can influence the climate from decade to decade, but an increase in solar output falls short as an explanation for recent warming. NASA satellites have been measuring the Sun’s output since 1978. The total energy the Sun radiates varies over an 11-year cycle. During solar maxima, solar energy is approximately 0.1 percent higher on average than it is during solar minima.

Each cycle exhibits subtle differences in intensity and duration. As of early 2010, the solar brightness since 2005 has been slightly lower, not higher, than it was during the previous 11-year minimum in solar activity, which occurred in the late 1990s. This implies that the Sun’s impact between 2005 and 2010 might have been to slightly decrease the warming that greenhouse emissions alone would have caused.

Satellite measurements of daily (light line) and monthly average (dark line) total solar irradiance since 1979 have not detected a clear long-term trend. (NASA graph by Robert Simmon, based on data from the ACRIM Science Team.)

Scientists theorize that there may be a multi-decadal trend in solar output, though if one exists, it has not been observed as yet. Even if the Sun were getting brighter, however, the pattern of warming observed on Earth since 1950 does not match the type of warming the Sun alone would cause. When the Sun’s energy is at its peak (solar maxima), temperatures in both the lower atmosphere (troposphere) and the upper atmosphere (stratosphere) become warmer. Instead, observations show the pattern expected from greenhouse gas effects: Earth’s surface and troposphere have warmed, but the stratosphere has cooled.

Satellite measurements show warming in the troposphere (lower atmosphere, green line) but cooling in the stratosphere (upper atmosphere, red line). This vertical pattern is consistent with global warming due to increasing greenhouse gases, but inconsistent with warming from natural causes. (Graph by Robert Simmon, based on data from Remote Sensing Systems, sponsored by the NOAA Climate and Global Change Program.)