Sassan Saatchi, a remote sensing scientist at NASA’s Jet Propulsion Laboratory, is one of several collaborators and friendly competitors working on that next draft of forest maps. He is working with satellites to see the forests for the trees and the carbon. His focus has been the thick stands of trees around the mid-section of Earth.

Tropical forests, such as those in Gabon, Africa, are an important reservoir of carbon. (Photography courtesy Sassan Saatchi, NASA/JPL-Caltech.)

“I first visited a tropical forest in 1994 for a project on the Bahian Coast of Brazil, and I was mesmerized by the complexity and beauty,” Saatchi says. “I fell in love with the landscape, with the biodiversity of plants and animals, and with the people. Every time you see a tropical forest, you find something new. For a person with a background in physics and mathematics, it is one of the most complex and challenging systems to understand and model.”

Because they grow year-round, tropical forests are believed to be the most productive on Earth. They store vast amounts of carbon in the wood and roots of their trees, though scientists have only been able to make broad, speculative estimates about just how much.

“In the northern forests of the United States, Canada, and Europe, there are usually sophisticated forestry systems to measure structure and biomass by state or region,” Saatchi says. “In the tropics, we often have no clue how forest carbon is distributed on a local level.”

What researchers do know is that tropical deforestation and forest degradation account for between 10 and 20 percent of all manmade emissions of carbon dioxide, a significant greenhouse gas. Images from satellites, the space shuttle, and the International Space Station have been showing the smoke plumes for decades. Deforestation is big business, as large-scale producers of palm oil, soybeans, beef, and leather add to the pressure on tropical forests from small farmers working to raise themselves out of poverty. Rising global demands for these commodities mean that these fires may not stop anytime soon.

Fire is commonly used to clear forested land in the tropics. An astronaut aboard the International Space Station captured this photograph of burning in Brazil on August 14, 2010. (NASA astronaut photograph ISS024-E-11941, courtesy the NASA-JSC Earth Observations Lab.)

“Tropical forests have a high diversity of plants, and are extremely variable over the landscape and in their interaction with the climate, yet they are poorly measured and monitored,” Saatchi notes. “I have worked every measurement and mathematical tool I could muster to try to understand and map this complexity.”

Working with 14 colleagues from 10 institutions around the world (including Michael Lefsky), Saatchi set about compiling and analyzing measurements from four space-based instruments—the GLAS lidar on ICESat, MODIS, the QuikSCAT scatterometer, and the Shuttle Radar Topography Mission—and from 4,079 ground-based forest plots. The team mapped more than three million measurements of tree heights and correlated them to measurements of trees from the ground. They calculated the amount of carbon stored above ground and in the roots. And they extrapolated their results over forest areas where there is less ground sampling but some known characteristics.

The result, released in May 2011, was a benchmark map of biomass carbon stocks covering 2.5 billion hectares (9.65 million square miles) of forest in 75 countries on three continents. Though previous efforts have mapped tropical forests on regional or local scales, the new map is “the first effort to quantify the distribution of forest carbon systematically over the entire tropical region,” Saatchi says. 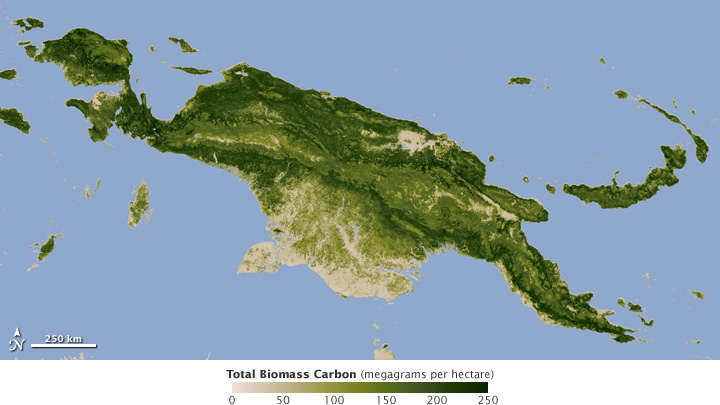 The researchers found that nearly 247 gigatons (billion tons) of carbon was sequestered in tropical forests, with 193 gigatons stored above ground in trunks, branches, and leaves, and 54 gigatons stored below ground in the roots. Forests in Central and South America accounted for 49 percent of the total, with Southeast Asia sheltering 26 percent and sub-Saharan Africa with 25 percent of the carbon storage. 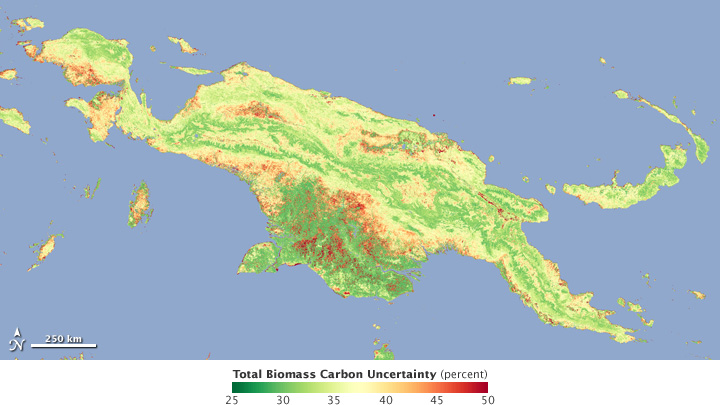 Almost as important as knowledge of the amount of biomass in an area is information about the uncertainty of the data. Areas of New Guinea where the carbon biomass is relatively well known are shown in green, while more uncertain measurements are orange and red. (NASA map by Robert Simmon, using data from Saatchi et al., 2011.)

Saatchi is most proud that his map not only assesses the carbon stock, but also gives a clear picture of the quality and certainty of the assessment. “Our map tells us the carbon at any location in the tropical forests and how certain we are about our estimation,” Saatchi says. The research team created mathematical models to show the margin of error in their carbon assessments. On the national and regional level, Saatchi says, the uncertainty is between 1 and 5 percent. “Given that biomass estimation from ground measurements has about a 10 to 20 percent error over large plots, our uncertainty in global mapping is very reasonable.”

Knowing something about the error bars is important for building confidence with resource managers and economists who are trying to assess the needs and values of forests. It is also important for pointing researchers to the areas where more work is needed.

“We can advance science by studying uncertainty, and the land part of the global carbon cycle is very uncertain,” Saatchi asserts. “Data collection on the ground is extremely limited because of the difficulty of access and the lack of infrastructure in most tropical regions—though that is something we do not necessarily want to change. Still, we really need more systematic and transparent measurements of tropical forest.”