To understand how the Earth’s climate system balances the energy budget, we have to consider processes occurring at the three levels: the surface of the Earth, where most solar heating takes place; the edge of Earth’s atmosphere, where sunlight enters the system; and the atmosphere in between. At each level, the amount of incoming and outgoing energy, or net flux, must be equal.

Remember that about 29 percent of incoming sunlight is reflected back to space by bright particles in the atmosphere or bright ground surfaces, which leaves about 71 percent to be absorbed by the atmosphere (23 percent) and the land (48 percent). For the energy budget at Earth’s surface to balance, processes on the ground must get rid of the 48 percent of incoming solar energy that the ocean and land surfaces absorb. Energy leaves the surface through three processes: evaporation, convection, and emission of thermal infrared energy.

About 25 percent of incoming solar energy leaves the surface through evaporation. Liquid water molecules absorb incoming solar energy, and they change phase from liquid to gas. The heat energy that it took to evaporate the water is latent in the random motions of the water vapor molecules as they spread through the atmosphere. When the water vapor molecules condense back into rain, the latent heat is released to the surrounding atmosphere. Evaporation from tropical oceans and the subsequent release of latent heat are the primary drivers of the atmospheric heat engine (described on page 3). 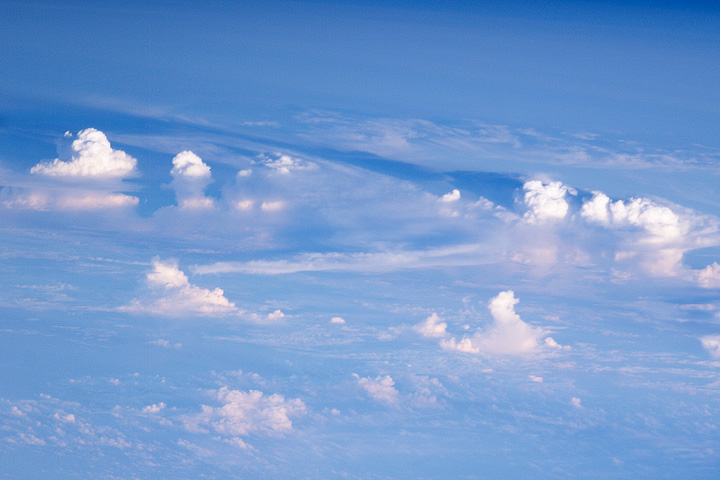 Towers of cumulus clouds transport energy away from the surface of the Earth. Solar heating drives evaporation. Warm, moist air becomes buoyant and rises, moving energy from the surface high into the atmosphere. Energy is released back into the atmosphere when the water vapor condenses into liquid water or freezes into ice crystals. (Astronaut Photograph ISS006-E-19436.)

An additional 5 percent of incoming solar energy leaves the surface through convection. Air in direct contact with the sun-warmed ground becomes warm and buoyant. In general, the atmosphere is warmer near the surface and colder at higher altitudes, and under these conditions, warm air rises, shuttling heat away from the surface.

Finally, a net of about 17 percent of incoming solar energy leaves the surface as thermal infrared energy (heat) radiated by atoms and molecules on the surface. This net upward flux results from two large but opposing fluxes: heat flowing upward from the surface to the atmosphere (117%) and heat flowing downward from the atmosphere to the ground (100%). (These competing fluxes are part of the greenhouse effect, described on page 6.) Remember that the peak wavelength of energy a surface radiates is based on its temperature. The Sun’s peak radiation is at visible and near-infrared wavelengths. The Earth’s surface is much cooler, only about 15 degrees Celsius on average. The peak radiation from the surface is at thermal infrared wavelengths around 12.5 micrometers.