The Human History of El Niño

El Niño was identified and named long before science caught up with the phenomenon. For centuries, Peruvian fishermen reaped a bounty off the Pacific coast of South America, where north- and west-flowing currents pulled cool, nutrient-rich water from the deep. But every so often, the currents would stop or turn around; warm water from the tropics would drive the fish away and leave the nets empty. These periodic warm spells were most noticeable around December or January—around the time of Christmas, the birth of "the boy child."

Some of the first scientific descriptions of El Niño came during exchanges between the Lima Geographical Society and the International Geographic Congress in the 1890s. But the roots of El Niño stretch far back into history, long before the birth of Jesus of Nazareth or the arrival of Peruvian fisherman. The chemical signatures of warmer seas and increased rainfall have been detected in coral samples and in other paleoclimate indicators since the last Ice Age. This pattern of water and wind changes has been going on for tens of thousands of years.

Earth scientists, historians, and archaeologists have theorized that El Niño had a role in the demise or disruption of several ancient civilizations, including the Moche, the Inca, and other cultures in the Americas. But the recorded history of El Niño really starts in the 1500s, when European cultures reached the New World and met indigenous American cultures.

Historical research has suggested that the Spanish conquest of the Incas and Peru may have been aided by El Niño conditions. When Francisco Pizarro first sailed from Panama along the west coast of South America in 1524, his progress was slowed and ultimately stopped by persistent south and southeasterly winds—which follow the pattern of the north-flowing coastal currents. In 1525-26, however, Pizarro got much farther down the coast, riding on favorable northeasterly winds, according to geographer Cesar Caviedes, author of El Niño in History. 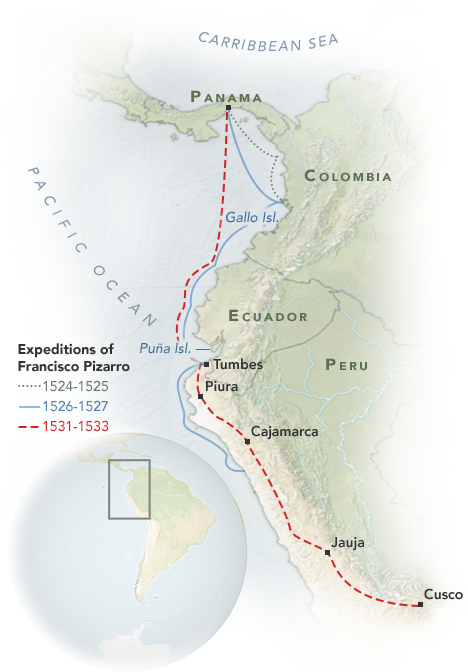 The expeditions of Francisco Pizarro provide hints that his conquest may have been aided by the winds of El Niño. The advance of Pizarro and his conquistadors was most successful during the El Niño of 1532. (NASA Earth Observatory map by Joshua Stevens.)

When Pizarro returned in 1531-32, his ships made haste down the coast, pushed along again by strong northeasterlies—the kind that blow in El Niño years. Once Spanish troops moved inland, they found blooming deserts, swollen rivers, and rainfall in the usually arid regions of Peru and Ecuador. The humid air and moist land allowed the conquistadors to sustain their long march and to avoid Incan settlements on the way to establishing a foothold in the country.

Between 1789 and 1792, the monsoon in South Asia failed multiple times, according to historical and scientific records. There is evidence that several other climate patterns—some of them affected by or coinciding with Asian monsoon patterns and El Niño—influenced storm tracks and westerly winds near Europe. According to some researchers, the combination of climate anomalies and unusual weather led to crop failures in Europe and set the stage for some of the unrest that exploded in the French Revolution of 1789.

In the book Late Victorian Holocausts, historian Mike Davis suggests that at least three great famines in the late 19th century were connected to El Niño. Extreme weather and the collapse of monsoon circulation—patterns documented by British and Indian officials, among others—led to great droughts and a few floods in 1876-78, 1896-97, and 1899-1900. Between 30 to 60 million people perished in India, China, and Brazil, among other countries; hundreds of millions suffered through hunger and social and political strife. Though European colonialism and the spread of laissez faire capitalism played important roles in these calamities, the global reach (teleconnections) of El Niño and La Niña likely spurred the great droughts, crop failures, and malaria outbreaks. 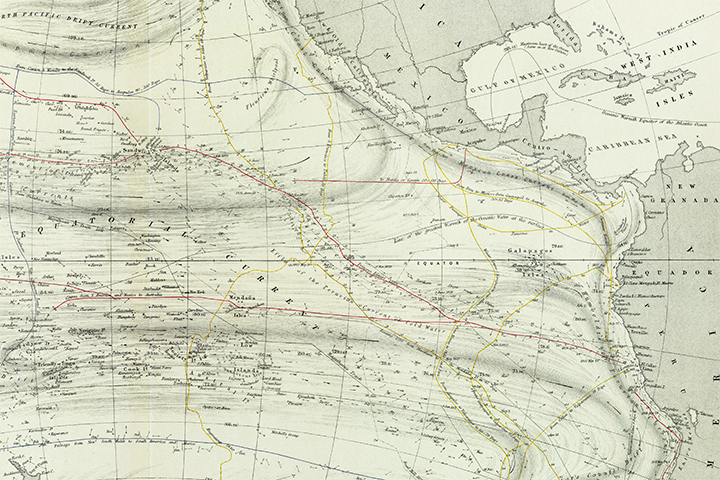 This 1856 map by Alexander Keith Johnson depicts temperatures, currents, and ship routes in the eastern Pacific, as they were known at the time. (Cropped image used under a Creative Commons license, courtesy of the David Rumsey Map Collection.)

In the 1920s, a transplanted statistician and physicist from Britain began to piece together the big picture of this global weather-maker. While working as Director of Observatories in India and studying the monsoon, Gilbert Walker noted that "when pressure is high in the Pacific Ocean it tends to be low in the Indian Ocean from Africa to Australia; these conditions are associated with low temperatures in both these areas, and rainfall varies in the opposite direction to pressure." He dubbed the alternating atmospheric weather pattern the "Southern Oscillation," noting how highs over the tropical Pacific coincided with lows over the Indian Ocean, and vice versa.

It would be another four decades before Jacob Bjerknes—a Norwegian-born scientist who helped found the meteorology department at the University of California, Los Angeles—made the final connection between the alternating warm and cool patterns in Pacific waters and the atmospheric circulation described by Walker. The entire pattern came to be known as ENSO, or El Niño-Southern Oscillation, and it includes the sister phenomenon known as La Niña. 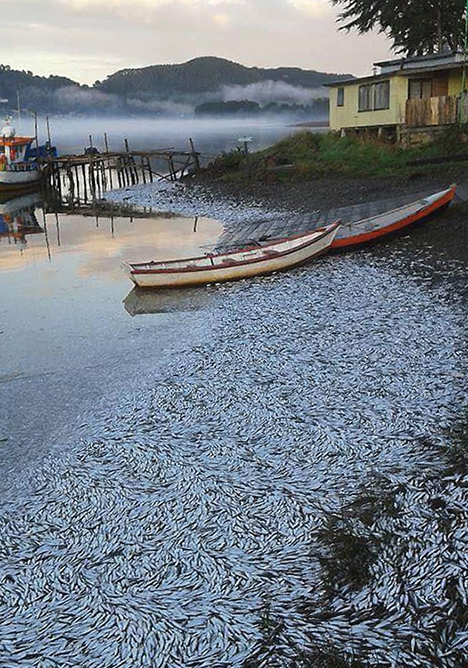 In April 2016, nearly 8,000 tons of sardines died and washed up along the coast of Chile, likely the result of El Niño related changes in the ocean. (Photographs courtesy of Armada de Chile.)

At least 26 El Niños were recorded in the 20th century, and each brought its own wrinkles that piqued the interest of scientists and sent ripples through economies. The El Niño of 1957-58, for instance, caused serious damage to the kelp forests off California. Another event in 1965-66 crashed the market for guano (fertilizer) in Peru and also spurred the use of soybeans for animal feed (instead of fish meal). In 1972-73, the anchovy population crashed, leading to the death of millions of sea birds and to destabilizing effects on the Peruvian economy and government.

In 1982-83, the first major El Niño to get significant real-time study, sea birds on Christmas Island abandoned their young and flew out over the Pacific in a desperate search for food. Nearly 25 percent of the fur seal and sea lion populations off Peru starved to death.

"To ask why El Niño occurs is like asking why a bell rings or a pendulum swings," atmospheric scientist George Philander wrote in a 1999 paper. "It is a natural mode of oscillation. A bell, of course, needs to be struck in order to ring." After nearly 100 years of investigation, scientists are still not sure what rings the bell; they just know that it rings.