Satellites have been magnificent in terms of providing us with a global view of what’s happening on our planet. This has been tremendously important in numerous fields of Earth science. For instance, in sea ice studies, it has allowed us to monitor the full Arctic and Antarctic sea ice covers every one or two days for almost the entire period since late 1978. This has provided us with detailed information about the strongly decreasing Arctic sea ice cover and slightly increasing Antarctic sea ice cover since 1978 that we simply would not have had without satellite data.

The book Our Changing Planet: The View From Space is full of impressive satellite imagery. Some images are global, revealing fascinating aspects of the Earth system that would not be apparent without the global or near-global view. For instance, the global image of lightning flash rate from eight years of satellite data shows that lightning is overwhelmingly more frequent over land than over oceans. Other views are impressive for the changes they reveal, such as the sequence of three images showing the crumbling of the Larsen B ice shelf along the Antarctic Peninsula in 2002. Still other images are impressive for the level of detail they present, such as an image of San Francisco showing not just the buildings (and their shadows) but also roads and parking lots and specks revealing cars and trucks along the roads and in the parking lots. 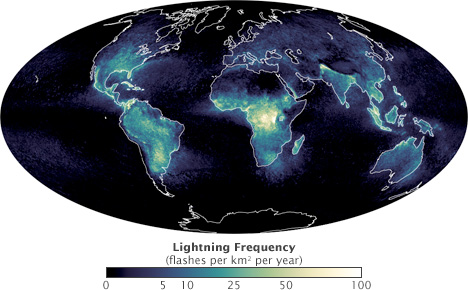 Until recently, humanity has only perceived Earth’s story in small chapters, a series of short scenes as we have observed the sky, land, water, and life in our backyard. As we watch our planet from space, the scenes flow together, and unconnected narrative becomes an epic novel in which all players have a part. We are coming to understand that all parts of our planet are connected, that a fallen forest or a melting glacier in a faraway place touches the rain that falls nearby, that the gases that rise into the atmosphere don’t disappear, that the seemingly small things we do from day to day add up to big changes in the Earth system.

The Earth Observatory exists to tell both Earth’s story and the stories of people seeking to understand Earth as we look back from space. It also exists to share the great beauty of the unique planet on which we live. Only from space can we appreciate the beauty of a vast phytoplankton bloom coloring the ocean with fanciful swirls of green and blue, or watch the slow southward creep of orange down the folds of the entire Appalachian Mountain Range as fall turns to winter. From space, the symmetry of a powerful hurricane or a plume of pale dust reaching over the dark ocean is beautiful. 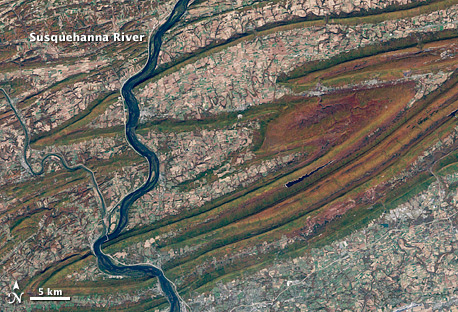 When NASA marked its 50th anniversary on July 29, 2008, it had 21 Earth-observing satellites in orbit. NASA’s rich history of observing Earth from space continues. In 2009, two more missions are scheduled to launch. The Orbiting Carbon Observatory will observe carbon dioxide concentrations in the atmosphere, and Glory will monitor aerosols like black carbon soot and track changes in the amount of energy entering the atmosphere from the Sun. NASA is developing and studying new missions in response to the National Research Council’s 2007 Decadal Survey for Earth Science—a once-a-decade report that prioritizes Earth science questions and makes recommendations for the missions NASA and its partners should undertake in the coming decade to help answer them. These missions will join those already in orbit to teach us more about Earth and give us a greater appreciation of its complex beauty.