As the EO-1 mission has aged, perhaps the most critical innovation has come from the onboard computer. “EO-1 has two separate computer processors with 256 megabytes of extra memory each,” says Mandl. That may seem paltry compared to a modern desktop computer, but it was enough to reshape a spacecraft’s mission. “It meant we had excess capacity to try new things.”

The first new software loaded onto EO-1 was the Autonomous Science Experiment, an onboard intelligent scheduling tool that allows the satellite to decide for itself which images Hyperion and ALI should take. Before the software, says Mandl, it took a flight engineer 67 steps to tell the satellite to acquire an image. “Now we send one command with a goal,” says Frye. “If the goal conflicts with another goal, the onboard scheduler decides which to image. Targeting is 100 percent automated.”

Indonesia’s Krakatau is one of the active volcanoes automatically monitored by SensorWeb. ALI took this image on November 17, 2010.

Because the satellite can think for itself, the system can accept a target request as late as five hours before the satellite flies over the target compared to 2-3 days required for most other sensors. The on-board scheduler prioritizes requests based on what they are for (ranked by theme) and the weather. The software uses predictions of cloudiness from the National Oceanic and Atmospheric Administration, so if a site is too cloudy, the next least-cloudy target will get priority.

“It’s a customer-driven method of running a mission,” says Mandl. Anyone from an archeologist to a disaster response agency can request images. “Flying a mission with a customizable user experience is one of EO-1’s greatest achievements.”

Sometimes the “customers” targeting EO-1 are other satellites. As part of SensorWeb, EO-1 automatically acquires images that are triggered by other satellites. For example, EO-1 monitors 100 volcanoes. When the Moderate Resolution Imaging Spectroradiometer (MODIS) on NASA’s Terra or Aqua satellites detects a hot spot at any of them, EO-1 automatically acquires an image on its next overpass. Hyperion can then record the temperature and position of lava flows, while ALI tracks ash plumes. If the onboard software detects a hot spot in the Hyperion measurement, the on-board systems automatically re-schedule another acquisition of that target at the next opportunity. The images are distributed to local officials. The SensorWeb system is a pathfinder to help build international satellite collaborations, particularly for disaster response. 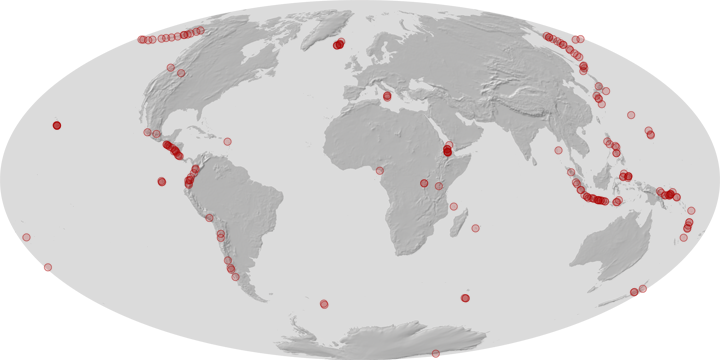 Red dots show the locations of the volcanoes that EO-1 monitors as part of the SensorWeb program. Activity at any of these volcanoes will automatically trigger EO-1’s sensors to collect images. (NASA map by Jesse Allen and Robert Simmon.)

SensorWeb and the scheduling tool have created significant cost savings. “Initially, we were spending about $7,500 per image to acquire them. Now the cost is less than $600 a scene,” says Cramer.

“EO-1 is one of the cheapest of NASA’s Earth missions,” confirms Middleton. These cost savings mean that anyone can now target EO-1 and access all data free of charge, making it useful to a growing range of people.

In the end, EO-1’s value far outweighs its price tag. “EO-1 has done so many different things, NASA got three or four missions for the price of one,” says Cramer. “We achieved all of the things that we hoped for and then some.”