The Advanced Land Imager (ALI) was built, says Cramer, to test new technology and to provide a safe technology shift for future Landsat missions. The Landsat series of satellites has provided a continuous record of changes in Earth’s landscape from 1972 to the present. ALI images the Earth at the same level of detail (30 meters per pixel), and it has a more detailed set of sensors that enable crisp, photo-like images. 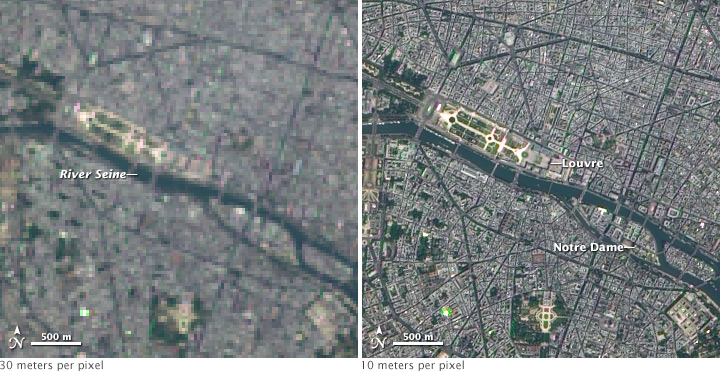 At ALI's resolution (30 meters per pixel), Paris is pixilated in this image from July 29, 2002. The image becomes sharp and clear when it parts data from ALI's more detailed sensors, the pan band, which see 10 meters per pixel in shades of gray.

ALI differs from previous Landsat sensors because of how it takes images. Previous Landsat instruments scanned from side to side, like a whiskbroom. The image is built from horizontal strips of information. ALI, on the other hand, is more like a push broom. It has detectors arranged parallel to one another and facing forward, and they collect information in vertical strips. This arrangement eliminates the need for the sensor optics to move from side to side, and fewer moving parts means less chance of failure, says EO-1 engineer Stuart Frye (GSFC).

A whiskbroom sensor, left, takes images by sweeping horizontally across the landscape as the satellite moves forward. A pushbroom sensor collects data in vertical strips as it moves forward.

After ten years of operation, ALI has proven that the push-broom technology is stable and reliable enough that the next Landsat satellite, the Landsat Data Continuity Mission, uses the same design. “The Landsat community is treating push-broom sensors like we’ve been building them for years,” says Cramer. “That’s a tribute to EO-1.”

The accumulation of small tweaks has had a large benefit for studying certain types of earthly events. “ALI is very useful in identifying smaller features such as floods and landslides on a local scale,” says Eric Anderson, a researcher at Cathalac, an organization that helps map disasters. Because ALI and Hyperion can be pointed at a particular location on the ground, scientists and disaster relief managers can gather images every 2-5 days; Landsat is usually limited to once in 16 days because it looks straight down.