EO-1 was commissioned as part of NASA’s New Millennium Program, set up to develop and fly technology that would reduce the risk and cost of future science missions. In short, NASA told its engineers: find a way to fly faster, better, and cheaper.

The EO-1 satellite was assembled at NASA Goddard Space Flight Center. From left to right, the photos show the EO-1 satellite, the Advanced Land Imager, Hyperion, and the pulsed plasma thruster. (Photographs courtesy ATK and the NASA EO-1 team.)

“EO-1’s primary purpose was to demonstrate that the Advanced Land Imager (ALI) was a suitable follow-on instrument for Landsat,” says Bryant Cramer, the program manager at GSFC during EO-1’s development and launch. Like Landsat-7, ALI records seven wavelengths of light reflected from Earth’s surface. ALI also records an additional two wavelengths to improve measurements of forests and crops, coastal waters, and aerosols.

Later, an innovative new instrument, the Hyperion imaging spectrometer, was added to the mission. Hyperion records more than 200 adjacent wavelengths of light to even better understand the makeup of Earth’s surface.

“EO-1 succeeded beyond anyone’s expectations,” says former project scientist Steve Ungar (GSFC). He credits the mission’s success to EO-1’s “crackerjack team” of engineers and scientists, who were drawn to the mission because they recognized that they could have a stake in the future of satellite technology. 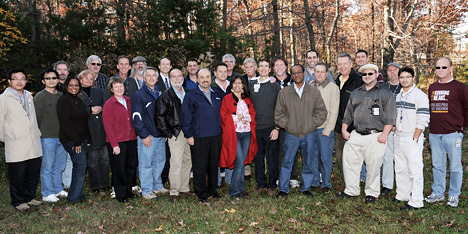 Some members of the EO-1 team gathered at NASA Goddard Space Flight Center on November 19, 2010. NASA Photograph by Deborah Mccallum.

In addition to the two primary sensors, the team proposed 32 new technologies for EO-1, including:

Though each new technology had the potential to advance spacecraft design, they also posed risks. The carbon-carbon radiators used for passive cooling, for example, were much lighter and simpler than traditional cryocoolers. “But when you touched the first carbon plates, your hand would come away black,” recalls Ungar.” Since this posed a risk to the imagers, the engineers had to come up with a coating to prevent contamination.”