A Celebration of Clouds
From Space, Earth Has an Elegant Atmosphere

Earth has been referred to as "the blue planet" due to its abundance of water. "The cloudy planet" would be equally appropriate. At any given time, about two-thirds of Earth's surface is covered by these masses of water and ice particles suspended in the atmosphere.

Clouds can be a nuisance for scientists trying to use satellites to observe features on the surface—such as volcanic eruptions, floods, or phytoplankton blooms. But for some scientists, clouds are exactly what they want to see. Clouds help make the weather and affect Earth's climate, and they can make a difference in the success or failure of efforts to simulate both. (Correctly representing clouds in climate models, it turns out, is really hard to do). But sometimes, clouds manifest in such a way that they simply inspire awe.

Nearly 70 percent of Earth's surface is covered by clouds at any given time. While cloud cover can obscure the surface and frustrate satellite imagery of land and sea, clouds offer a beautiful glimpse of our atmosphere and its processes. (NASA Earth Observatory image by Joshua Stevens, using Blue Marble imagery.)

Intrigued by some cloud images that we found in our research, as well as several posted on social media, we started a conversation with NASA cloud scientist Bastiaan Van Diedenhoven. Every few days, while browsing satellite imagery, Van Diedenhoven notices a unique cloud feature and shares it via social media. But you won't see many storms: “Storms are interesting, but they're kind of obvious," he said. “I guess I'm looking for things that other people won't see."

Rain clouds obscured the tops of skyscrapers on November 15, 2016, as I spoke with Van Diedenhoven and colleagues at NASA's Goddard institute for Space Studies (GISS) in New York. The group discussed new advances in their study of cloud microphysics. Then, on a lighter note, they turned to the series of images below and described what caught their eyes. All of the images show that the common cloud can take on a wide range of elegant forms.

The value in looking at clouds from space, according to Van Diedenhoven, is the big picture. For example, the wide, satellite view might show that the clouds dropping rain on us today are actually part of a system that formed days ago over a completely different part of the planet.

“You're really getting the perspective of the Earth as a whole, and as a complex system where many things interact," Van Diedenhoven said. “You don't get that perspective if you look from below." 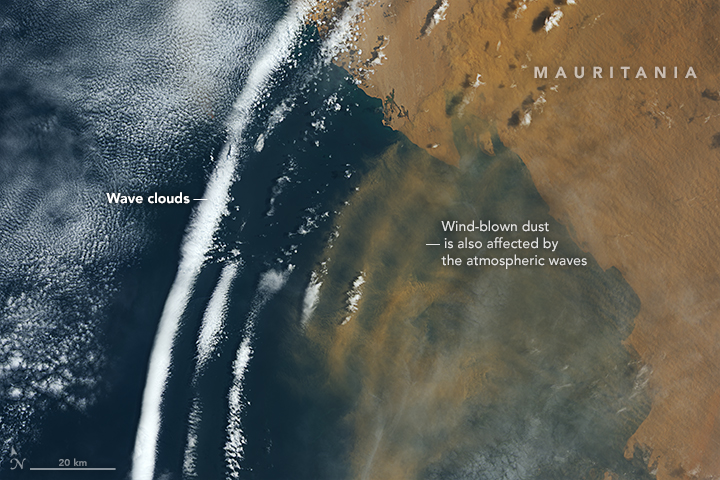 On August 13, 2016, the Operational Land Imager (OLI) on Landsat 8 captured this image of clouds off the coast of Mauritania. You can't see it directly, but air masses from Africa and the Atlantic Ocean are colliding in this image. There is, however, a visibly striking outcome: The collision produces a wave structure in the atmosphere. Parts of these waves are favorable for cloud formation, while other parts are not.

The dust blowing out from Africa appears to be “riding the waves." Dust has been known to affect cloud growth, but it probably has little to do with the cloud pattern observed here.

On November 27, 2015, the Moderate Resolution Imaging Spectroradiometer (MODIS) on NASA's Terra satellite captured this image of icebergs floating offshore of South Georgia Island, more than 1,600 kilometers (1,000 miles) east-northeast of Tierra del Fuego. Two of the larger bergs are big enough to force air masses up and over the ice. The resulting ripples in the atmosphere give rise to “wave clouds." The smaller bergs only produce a “cloud wake." Just as a ship leaves a V-shaped wake in the water, icebergs can leave behind similar wake in low-level clouds. 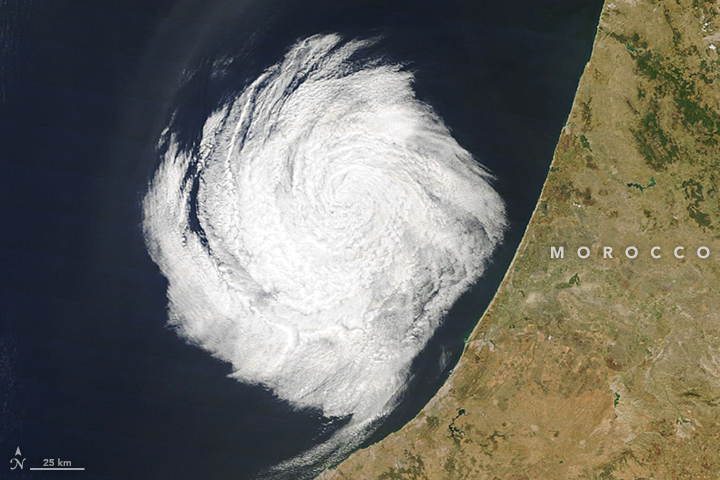 The Moderate Resolution Imaging Spectroradiometer (MODIS) on NASA’s Terra satellite captured this image of a strange system off the coast of Morocco on July 10, 2016. “It looks like a hurricane, but it's not," Van Diedenhoven said. Instead, the system is very small—about 100 kilometers across—and is made up of shallow clouds. “Hurricanes have a greater vertical extent. This is really just a cute, dynamic feature in the atmosphere." 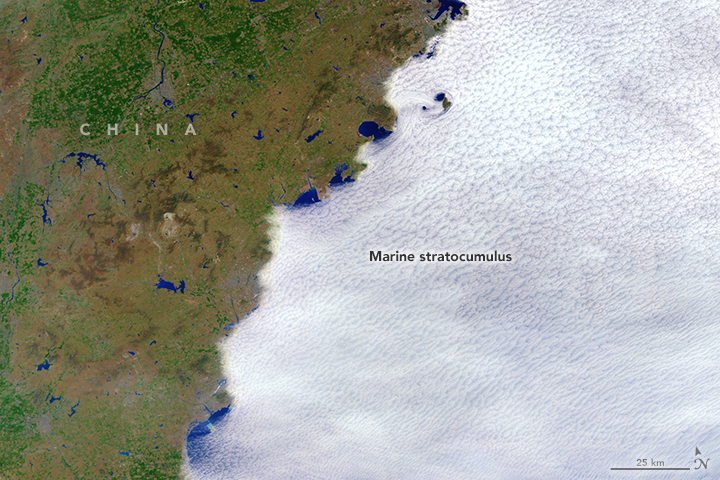 On April 8, 2014, Landsat 8 captured this classic example of marine stratocumulus clouds off the coast of China. The ocean is cool and, unlike the land, does not heat up much throughout a day. Cool, moist marine air commonly gives rise to dense clouds over the ocean. (Note that the image is false-color, giving the blues an unnatural tone.)

In this case, an onshore wind carries the clouds from the ocean toward the land. But the land is warmer, drier, and unfavorable for cloud growth. As a result, any marine clouds that move onshore tend to evaporate, leaving a cloud layer that traces the coastline. 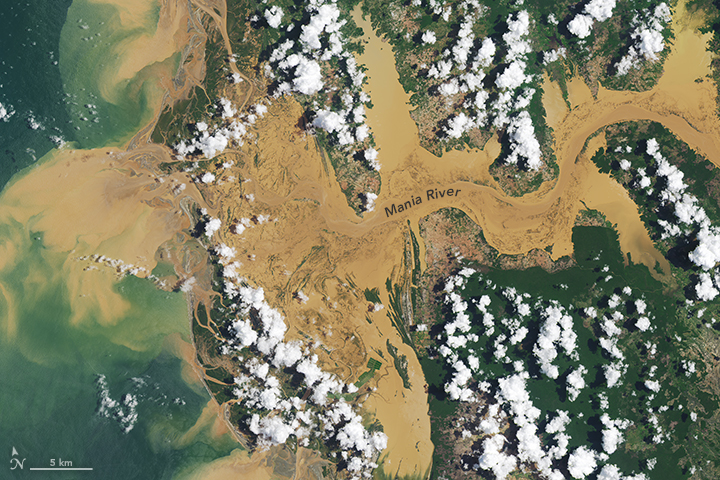 Sometimes the opposite occurs, as was the case when Landsat 8 passed over Madagascar on January 20, 2015. Conditions along the Mania River were such that clouds formed over the land but not over the water.

In the tropical rainforests of Madagascar, there is ample moisture available for cloud formation. But to form a cloud, you also need to cool the air, and the most common way to do that is by lifting it. Land that heats up throughout the day warms the near-surface air which then rises, cools, and condenses. In general, clouds form where the air is ascending (over land in this image), and they fail to form where it is descending (over the rivers).

These images, acquired by Landsat 8 between 2014 and 2016, pose another mystery. The New Zealand mountain ranges pictured here are clearly higher than the tops of the clouds. But are the mountains blocking the clouds from moving to the other side of the range, or are they helping to form the clouds?

The answer depends on the direction of the wind. The ranges could simply be blocking the eastward or westward progression of air masses. Or the clouds could be born from air that gets forced up by the mountain range and then produces a cloud on the other side—a phenomenon known as the orographic lift effect. 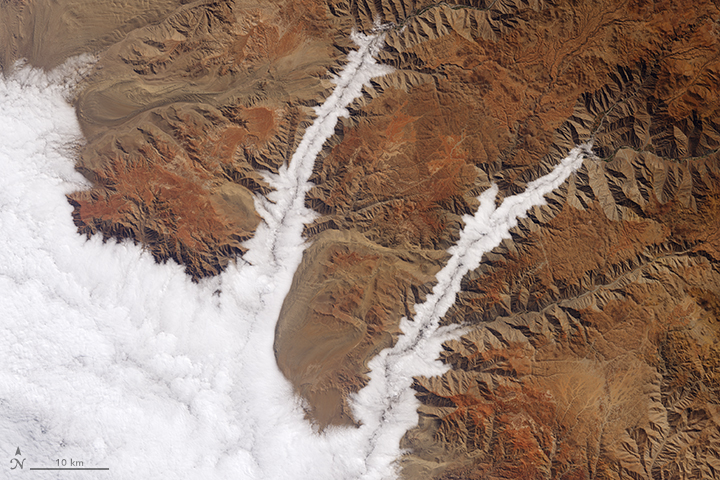 During the austral winter (June through August) and early spring, Pacific oceanic and atmospheric conditions are often right for marine stratocumulus to develop off the coast of Chile and Peru. This image shows such clouds off of Peru on July 26, 2015.

On some occasions, the prevailing winds move the clouds inland. Because the marine clouds are low, they are easily blocked by coastal hills and mountains. But low valleys open to the ocean, such as the Yauca and Acarí river canyons, allow the clouds to easily move inland. 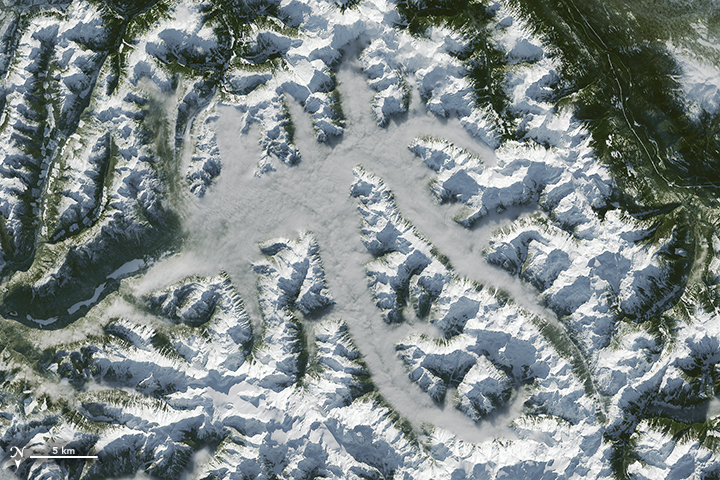 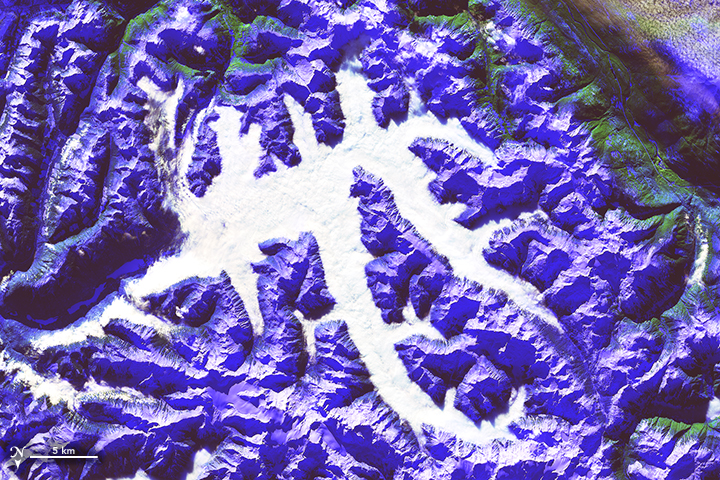 Clouds and snow both appear white in natural-color satellite images, which can make it difficult to tell the difference. On January 8, 2016, the Operational Land Imager on Landsat 8 captured these images of white-colored valleys in Vancouver, Canada.

The varied texture in the natural color image (left) is one clue that these are clouds, not snow. But the details become more apparent when you look at the same scene in false-color (right). Ice absorbs shortwave infrared light and appears blue in the false-color image. Conversely, liquid clouds don't absorb that much shortwave infrared radiation, so they appear white. 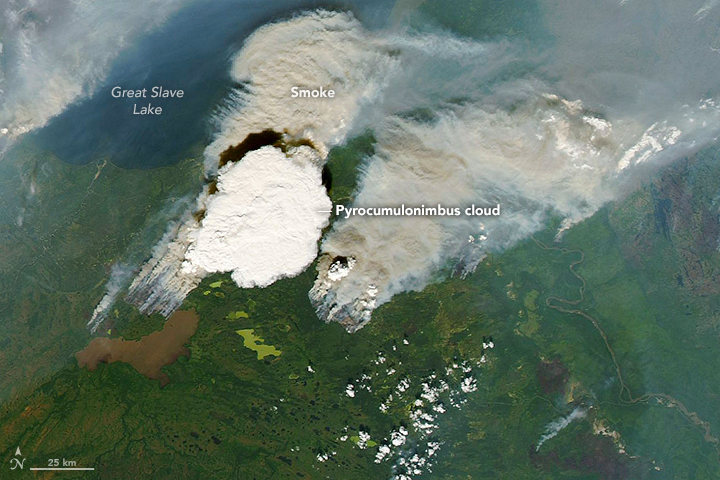 Energy from the Sun-warmed ground is not the only way to get air masses to lift, cool, and form clouds. That energy can also come from the heat of a volcano or, in this case, fire. NASA's Aqua satellite captured this image of a pyrocumulonimbus cloud on August 5, 2014, south of Yellowknife, Canada.

Pyrocumulonimbus and pyrocumulus clouds—sometimes called “fire clouds"—are tall, cauliflower-shaped clouds that show up in satellite imagery as opaque white patches hovering over darker smoke. With the exception of their fiery origin, pyrocumulus clouds are similar to cumulus clouds in structure. 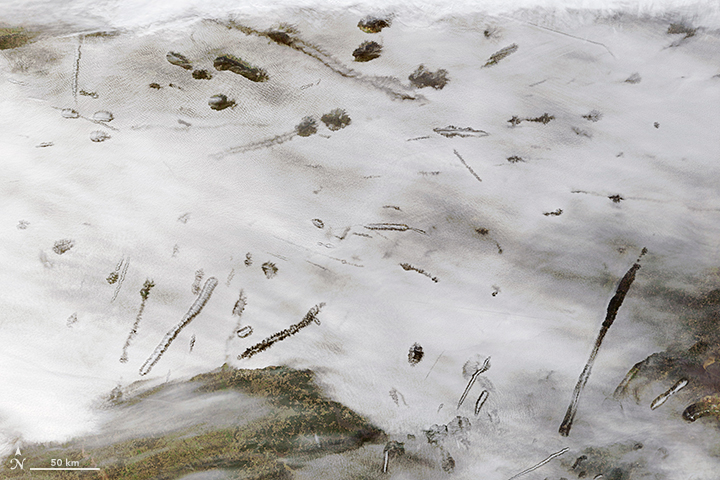 On January 29, 2007, Terra MODIS acquired this extraordinary example of a phenomenon known as “hole-punch clouds" over Oklahoma, Arkansas, Louisiana, and Texas. This strange phenomenon results from a combination of cold temperatures, air traffic, and perhaps atmospheric instability.

If you were to look from below, it would appear as if part of the cloud was falling out of the sky. As it turns out, that's actually what's happening. The clouds are initially composed of liquid drops at a super-cooled temperature below 0° Celsius. As an airplane passes through a cloud, particles in its exhaust can create a disturbance that triggers freezing. Ice particles then quickly grow at the expense of water droplets. Eventually the ice crystals in these patches of clouds grow large enough that they literally fall out of the sky – earning hole-punch clouds their alternate name: “fallstreak holes." 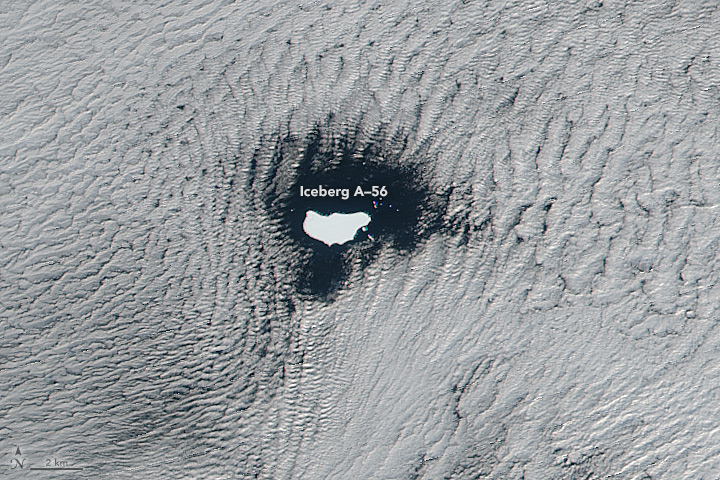 On June 1, 2016, the Visible Infrared Imaging Radiometer Suite (VIIRS) on the Suomi-NPP satellite captured this image of low stratus clouds framing iceberg A-56 as it drifted in the South Atlantic Ocean. The exact reason for the hole in the clouds is somewhat of a mystery. It could have formed by chance, although imagery from the days before and after this date suggest something else was at work.

It could be that the relatively unobstructed path of the clouds over the ocean surface was interrupted by thermal instability created by the iceberg. If an obstacle is big enough, it can divert the low-level atmospheric flow around it, a phenomenon often caused by islands.

Hole-punch clouds are not the only types influenced by human activity. The Geostationary Operational Environmental Satellite (GOES-West) captured this series of images of ship tracks amid natural marine clouds southwest of Vancouver Island on January 15, 2013.

These clouds are seeded by the particles in ship exhaust. They are liquid clouds, but they appear brighter than surrounding clouds because the exhaust particles result in water being distributed over more and smaller droplets. This means their combined area is increased, which makes for a more reflective cloud.

“Ship tracks are very striking to the eye," Van Diedenhoven said. “But they also show that we are changing the atmosphere and changing the clouds. Much of our current cloud research is about understanding how particles from human emissions change clouds in more subtle ways, but on much larger scales."