In addition to revealing how pollution levels can change in certain areas over time, satellites have played a key role in showing how pollutants can travel from one part of the globe to another. While pollutants disperse over time and can be removed from the atmosphere by rain and other meteorological processes, satellites have occasionally observed giant rivers of pollution persisting for weeks and streaming from one continent to another. In recent years, most of these rivers had sources in Asia, flowing east across the Pacific to western North America. But satellites have also observed pollution wafting from North America to Europe, and from Europe to North Africa and Asia.

“These lines we draw on a map that separate us do not exist,” said Anousheh Ansari, an Iranian-American tourist who spent nine days on the International Space Station in 2006. “The Earth is moving all the time. There is nothing that stays constant, and there is no way you can contain a problem. The problem on the other side of the world will eventually spread.” 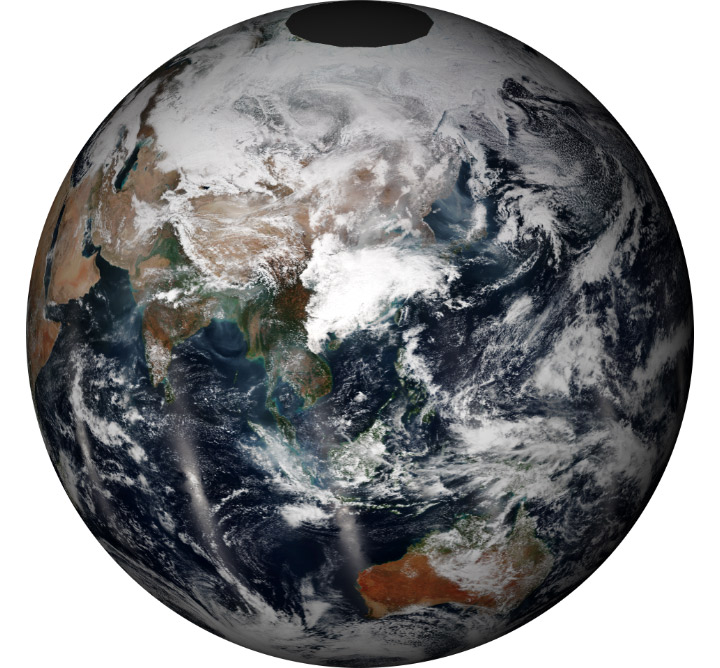 Once pollution enters the atmosphere, it is spread by the prevailing winds, without regard for borders. (NASA image by Robert Simmon, using data from the NOAA Environmental Visualization Laboratory.)

“We’ve outsourced our manufacturing and much of our pollution, but some of it is blowing back across the Pacific to haunt us,” said Steven Davis, a University of California earth scientist and co-author of the study. “Given the complaints about how Chinese pollution is corrupting other countries’ air, this paper shows that there may be plenty of blame to go around.”