What Can the Satellites See?

There are thousands of ground-based monitoring stations in the United States and other industrialized nations collecting data on air pollution. But even the largest ground networks offer only a partial picture of regional and global air quality.

Even in densely populated Europe, there are large areas without any stations measuring air quality. (NASA map by Robert Simmon, using data from the European Environment Agency’s Airbase and ESRI.)

“One of the reasons the research community has so much interest in satellites is that they will eventually be able to provide global measurements in near-real time, analogous to what weather satellites do for clouds and water vapor today,” said Jack Fishman, an atmospheric scientist at Saint Louis University who spent three decades working at NASA’s Langley Research Center.

But experts are quick to point out that satellites present their own set of challenges. It can be difficult to distinguish between pollutants high in the atmosphere and those lower down. Clouds can block measurements. And even when skies seem clear, satellites are so far away from the surface that it can be difficult to map fine details. “It’s really the integration of satellite observations, ground sensors, aerial campaigns, and computer modeling that will get us to where we need to go,” said Fishman. “But you can’t do much with the models unless you have high-quality, global-scale measurements to constrain them.”

Since the beginning of the Space Age, many sensors have been sent into orbit. However, most of them collect information about the entire column of air between the satellite and the ground. Only a small subset can measure pollutants in the troposphere, the atmospheric layer where humans live and breathe. 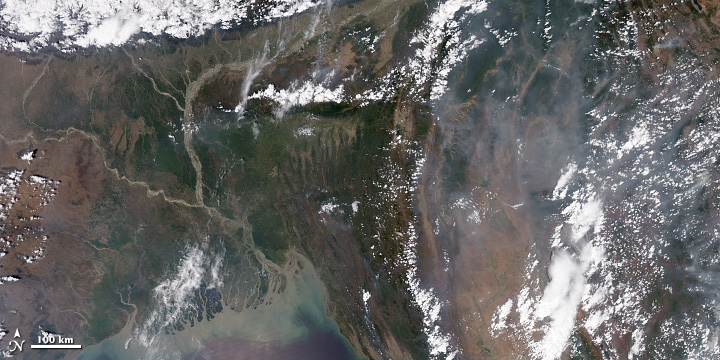 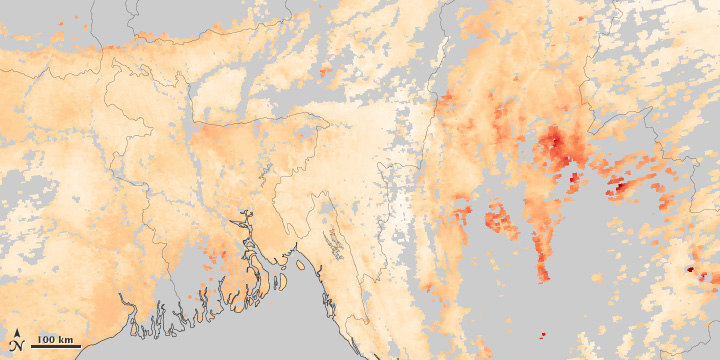 Clouds, variations between land and water, and the three-dimensional structure of the atmosphere make it difficult to measure air pollution from space. These images, collected on April 13, 2014, compare a natural-color view of of Southeast Asia to the measured concentration of aerosols. Areas of the aerosol map shown in gray indicate where the satellite could not collect valid data. (NASA images by Jesse Allen and Robert Simmon, based on data from MODIS.)

In some cases, instruments were designed to study the upper atmosphere but scientists later realized they could glean information about lower parts of the atmosphere. The Total Ozone Mapping Spectrometer (TOMS), for instance, was launched in 1978 with the goal of monitoring the ozone hole in the upper atmosphere. Scientists at NASA’s Langley Research Center later developed a technique that made it possible to retrieve information about ground-level ozone.

The European Global Ozone Monitoring Experiment (GOME-1) sensor, launched in 1995, was the first satellite instrument specifically designed to make direct measurements of gaseous pollutants in the troposphere. It measured levels of nitrogen dioxide and formaldehyde, which are good proxies for nitrogen oxides and volatile organic compounds that react in the air to form ozone. It also measured levels of sulfur dioxide at the surface.

Since then, the European Space Agency and NASA have launched more sophisticated sensors with better spatial resolution. For instance, ESA’s Scanning Imaging Absorption Spectrometer for Atmospheric Chartography (SCIAMACHY) had a resolution seven times better; the Ozone Monitoring Instrument (OMI) built by the Dutch and Finnish governments and launched by NASA on Aura, was more than 40 times better. Rather than simply measuring patches of pollution that were hundreds of square kilometers, OMI could take measurements that were on the order of a few dozen kilometers—meaning it detect elevated pollution over specific sources, such as cities or power plants.