Whereas aerosols can influence climate by scattering light and changing Earth’s reflectivity, they can also alter the climate via clouds. On a global scale, these aerosol “indirect effects” typically work in opposition to greenhouse gases and cause cooling. While greenhouse gases disperse widely and have a fairly consistent impact from region to region, aerosol effects are less consistent, partly because of how the particles affect clouds.

Most elementary school students learn that clouds form when enough water vapor condenses. That’s true, but aerosols play a critical role in the process. In fact, most clouds owe their existence to aerosols that serve as the tiny “seeds,” called cloud condensation nuclei.

Natural aerosols—often sulfates, sea salt or ammonium salts—are the most common condensation nuclei in pristine environments. Polluted air, in contrast, usually contains much higher concentrations of water-soluble particles, which means pollution-rich clouds tend to have more numerous, but smaller, droplets. The small droplets make polluted clouds look brighter than they would otherwise be. Just as many bits of crushed ice give light more surfaces to reflect off—appearing brighter than a solid cube of ice—if the water in a cloud is divided into a larger number of smaller droplets, it will scatter more light and become more reflective.

Clouds in clean air are composed of a relatively small number of large droplets (left). As a consequence, the clouds are somewhat dark and translucent. In air with high concentrations of aerosols, water can easily condense on the particles, creating a large number of small droplets (right). These clouds are dense, very reflective, and bright white. This influence of aerosols on clouds is called the “indirect effect,” and is a large source of uncertainty in projections of climate change. (NASA image by Robert Simmon.)

Brighter clouds, in turn, block sunlight from reaching Earth’s surface, shading the planet and producing net cooling. This cloud brightening effect—called the “cloud albedo effect”—may have a big impact on the climate, though only in recent years has it been possible to start quantifying the effect.

This impact of aerosols is clearly visible in ship tracks, bright streaks in marine clouds that look like airplane contrails. In the absence of ships, sea salt particles and the natural sulfates produced by phytoplankton seed most marine clouds. However, the exhaust from ship smokestacks make trails of sulfates and other aerosols that form long, bright clouds.

Overall, clouds are thought to cool Earth’s surface by shading about 60 percent of the planet at any one time and by increasing the reflectivity of the atmosphere. Given that, just a 5 percent increase in cloud reflectivity could compensate for the entire increase in greenhouse gases from the modern industrial era in the global average. Likewise, long-term decreases in cloudiness could have major impacts.

However, aerosols are distributed around the planet differently than greenhouse gases, so the effects do not simply cancel each other. Parsing out how clouds—as well as feedback cycles involving clouds—affect regional climate systems remains a high priority for climatologists. 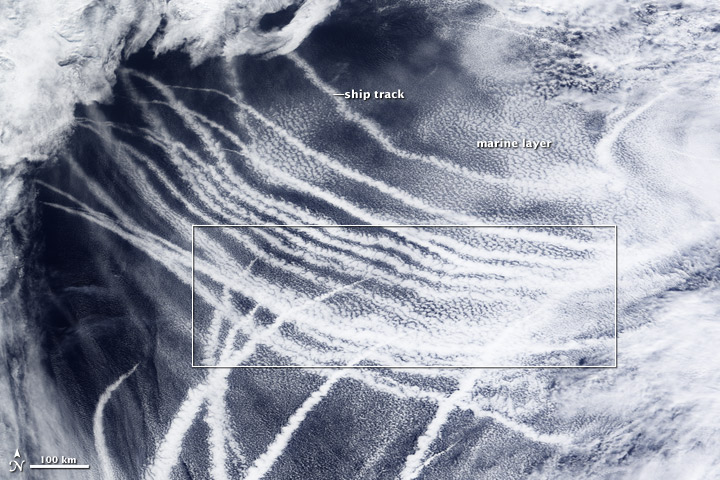 The effect of aerosols on clouds is clearly visible in ship tracks—the dense, bright marine clouds formed by the exhaust of passing ships. This natural-color image shows the bright white clouds (top) and a map of cloud droplet radius (bottom). Where ship exhaust mixed with the cloud layer, droplets became much smaller. (NASA image by Jesse Allen and Robert Simmon, based on data from MODIS.)

Aerosols also have complex effects on clouds and precipitation. Broadly speaking, aerosols are thought to suppress precipitation because the particles decrease the size of water droplets in clouds. However, under some environmental conditions, aerosols can lead to taller clouds that are more likely to produce lightning and strong downpours. In a few places, meteorologists have even detected a cycle in which the frequency of thunderstorms is connected to mid-week peaks in aerosol emissions.

Aerosol type plays an important role in determining how aerosols affect clouds. Whereas reflective aerosols tend to brighten clouds and make them last longer, the black carbon from soot can have the opposite effect. Studies of pollution over the Indian Ocean and biomass burning smoke in the Amazon have shown that the black carbon warms the surrounding atmosphere and can cause cloud droplets to evaporate. This process, called the “semi-direct effect,” turns clouds into a smoky haze that suppresses precipitation. 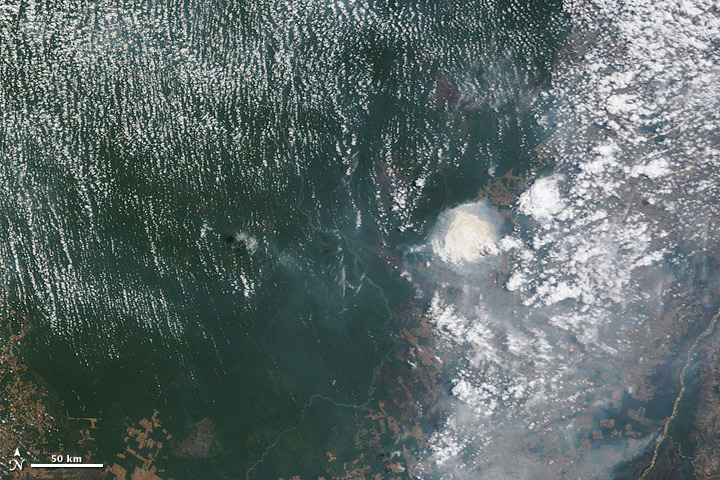 Interactions between smoke and clouds are complex. In some cases, smoke and other aerosols help cloud formation. In others, smoke suppresses clouds. Both effects are apparent in this natural-color satellite image of the Brazilian Amazon, acquired on August 31, 2010. (NASA image by Jeff Schmaltz, MODIS Rapid Response.)

Current estimates suggest the cooling driven by aerosol indirect effects is less than half as much as the warming caused by greenhouse gases when averaged over the globe. But these indirect effects are highly uncertain and vary considerably in space and time. Therefore, on smaller space and time scales, the climate effects of aerosols can be significant.

The details of aerosol indirect effects are only partially understood, as most instruments cannot measure aerosols within clouds. Climatologists consider the role of clouds to be the largest single uncertainty in climate prediction. Less than a third of the models participating in the Fourth Intergovernmental Panel on Climate Change (IPCC) included indirect aerosol effects, even in a very limited way, and those considered only sulfate aerosols.