The Sun provides the energy that drives Earth’s climate, but not all of the energy that reaches the top of the atmosphere finds its way to the surface. That’s because aerosols—and clouds seeded by them—reflect about a quarter of the Sun’s energy back to space. 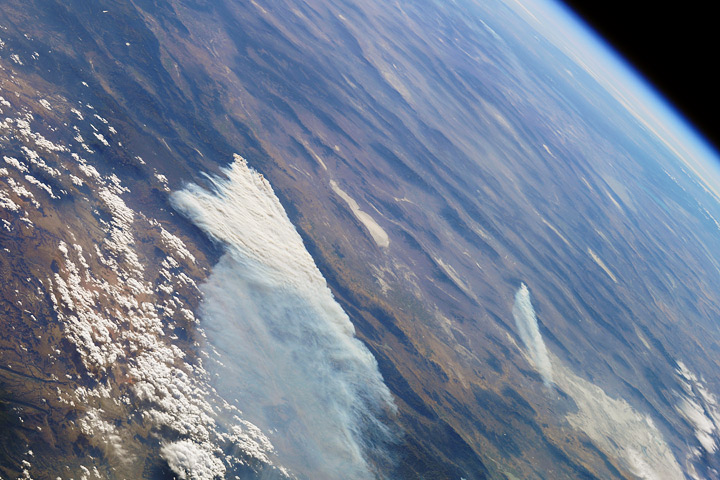 Aerosols play an important role in Earth’s climate. Most aerosols are brighter than land or ocean, and cool the Earth by reflecting sunlight back to space. (NASA astronaut photograph ISS024-E-15122.)

Different aerosols scatter or absorb sunlight to varying degrees, depending on their physical properties. Climatologists describe these scattering and absorbing properties as the “direct effect” of aerosols on Earth’s radiation field. However, since aerosols comprise such a broad collection of particles with different properties, the overall effect is anything but simple.

Although most aerosols reflect sunlight, some also absorb it. An aerosol’s effect on light depends primarily on the composition and color of the particles. Broadly speaking, bright-colored or translucent particles tend to reflect radiation in all directions and back towards space. Darker aerosols can absorb significant amounts of light.

Pure sulfates and nitrates reflect nearly all radiation they encounter, cooling the atmosphere. Black carbon, in contrast, absorbs radiation readily, warming the atmosphere but also shading the surface. Organic carbon, sometimes called brown carbon or organic matter, has a warming influence on the atmosphere depending on the brightness of the underlying ground. Dust impacts radiation to varying degrees, depending on the composition of the minerals that comprise the dust grains, and whether they are coated with black or brown carbon. Salt particles tend to reflect all the sunlight they encounter. 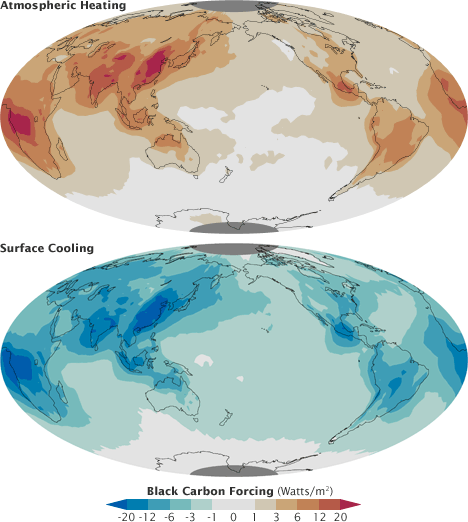 Black carbon aerosols, similar to the soot in a chimney, absorb sunlight rather than reflecting it. This warms the layer of the atmosphere carrying the black carbon, but also shades and cools the surface below. (Maps adapted from Chung, 2005.)

Aerosols can have a major impact on climate when they scatter light. In 1991, the eruption of Mount Pinatubo in the Philippines ejected more than 20 million tons of sulfur dioxide—a gas that reacts with other substances to produce sulfate aerosol—as high as 60 kilometers (37 miles) above the surface, creating particles in the stratosphere. Those bright particles remained above the clouds and didn’t get washed from the sky by rain; they settled only after several years.

Climatologists predicted global temperatures would drop as a result of that global sulfate infusion. They were right: Following the eruption, global temperatures abruptly dipped by about a half-degree (0.6°C) for about two years. And Pinatubo isn’t a unique event. Large, temperature-altering eruptions occur about once per decade.

Large volcanic eruptions may lift sulfate aerosols into the stratosphere, which usually cools the global climate for the following year or two. (Graph by Robert Simmon, based on aerosol data from GISS and temperature data from the UAE CRU.)

Aerosols, particularly black carbon, can alter reflectivity by depositing a layer of dark residue on ice and other bright surfaces. In the Arctic especially, aerosols from wildfires and industrial pollution are likely hastening the melting of ice. 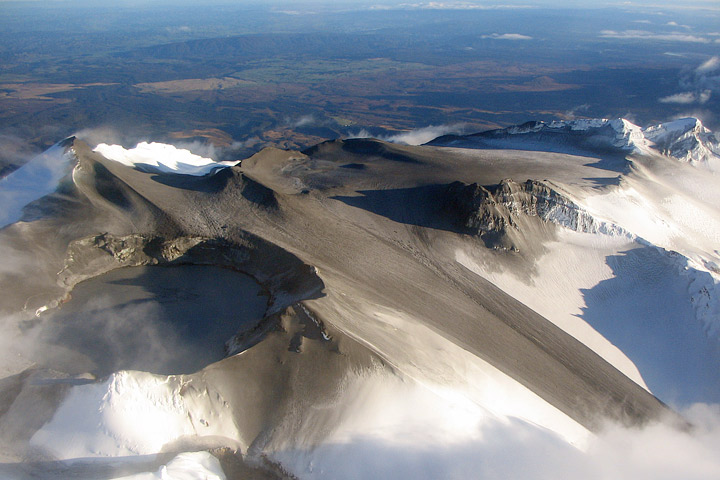 Dark aerosols dramatically change the reflectivity of the Earth’s surface when they land on snow. Black ash covered the summit of New Zealand’s Mount Ruapehu after an eruption in 2007, but was soon covered by fresh snow. Long-term accumulation of black carbon aerosols in the Arctic and Himalaya is leading to increased melting of snow. (Photograph ©2007, New Zealand GeoNet.)

Scientists believe the cooling from sulfates and other reflective aerosols overwhelms the warming effect of black carbon and other absorbing aerosols over the planet. Models estimate that aerosols have had a cooling effect that has counteracted about half of the warming caused by the build-up of greenhouse gases since the 1880s. However, unlike many greenhouse gases, aerosols are not distributed evenly around the planet, so their impacts are most strongly felt on a regional scale.

Despite considerable advances in recent decades, estimating the direct climate impacts of aerosols remains an immature science. Of the 25 climate models considered by the Fourth Intergovernmental Panel on Climate Change (IPCC), only a handful considered the direct effects of aerosol types other than sulfates.