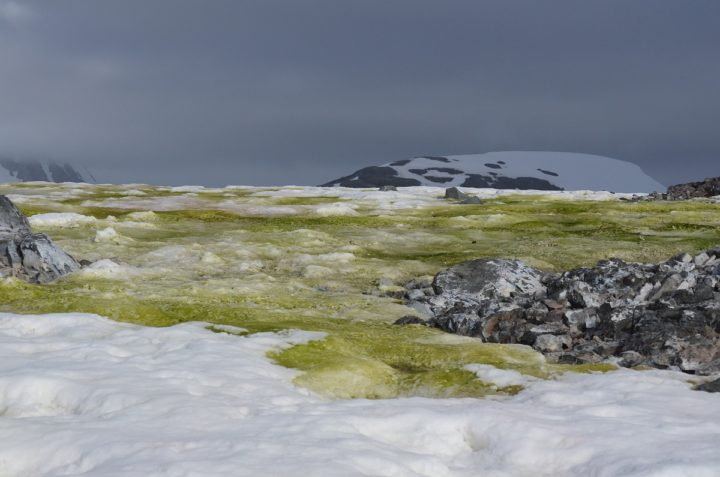 You never know where phytoplankton will turn up next. From space, we regularly see colorful blooms of them swirling in the world’s oceans. Inland basins and waterways support them too, such as Florida’s Lake Okeechobee, Washington’s Hood Canal, and North America’s Great Lakes.

Even the waters off the coast of Antarctica can sustain blooms. We recently showed a satellite image in which algae in a harbor near the Ross Sea had turned the sea ice a wild shade of green. As this photograph shows, they also appear to thrive on the snow and ice capping the southern continent.

“I was in Antarctica in February 2013 and saw plenty of algae happily growing in the ice (green, yellow, and red),” said ocean scientist Norman Kuring of NASA’s Goddard Space Flight Center. “I took this photo on Orne Island showing lots of green snow and ice.”

Kuring notes, however, that the type of phytoplankton inhabiting the snow and ice on Orne Island — on the opposite side of the continent, near the Antarctic Peninsula — is probably different from the species that bloomed in the Ross Sea. Direct sampling and analysis is the best way to know for sure, but that’s not always possible, especially in remote regions.

This entry was posted on Tuesday, March 21st, 2017 at 4:38 pm and is filed under Ground Photography. You can follow any responses to this entry through the RSS 2.0 feed. Both comments and pings are currently closed.