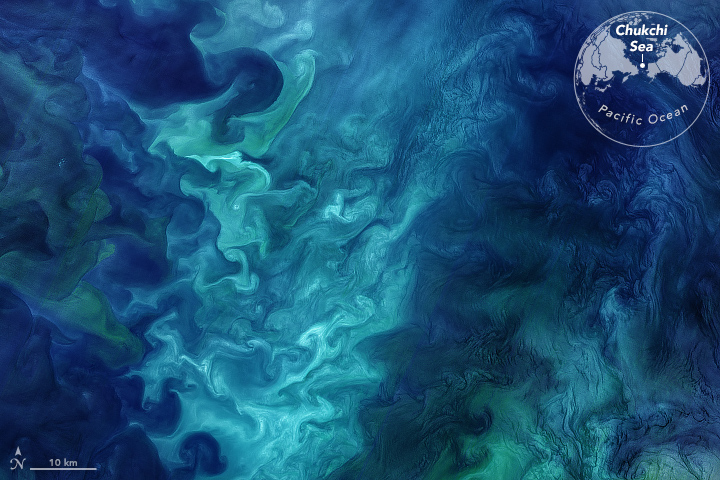 Regardless of the amount of winter ice cover, the waters off of the Alaskan coast usually come alive each spring with blooms of phytoplankton. These blooms can form striking patterns of blue and green seawater, such as those visible in this image of the Chukchi Sea acquired on June 18, 2018, by the Operational Land Imager (OLI) on Landsat 8.

“We see blooms in the southern Chukchi Sea pretty regularly this time of year,” said Kevin Arrigo, a biological oceanographer at Stanford University. But the regularity of the blooms and their simple beauty belie the complexity of this ecosystem.

According to Karina Giesbrecht, a doctoral candidate at the University of Victoria, diatoms are typically the first type of phytoplankton to bloom each spring after the breakup of Arctic sea ice. Diatoms are a microscopic form of algae, with silica shells and plenty of chlorophyll, and one of the most common types of phytoplankton in the ocean. Other types, such as coccolithophores, have adapted to harsher conditions and show up once nutrients start to run out. In the southern part of the Chukchi Sea just north of the Bering Strait, however, conditions are a bit more complex.

Two main water masses flow from the Bering Strait and enter the southern Chukchi. One type, known as “Bering Sea Water,” is cool, salty, and rich in nutrients. This water fuels most of the phytoplankton growth, primarily diatoms, which are likely the main reason for the colorful green waters pictured here. (Sediments could also be contributing to the bright green areas.)

“The Bering Strait does a great job of mixing up nutrients to the surface waters, where there’s lots of light available for the phytoplankton to grow,” Giesbrecht said. “That mixing, followed by the slowing of the currents that happens once the waters exit the Bering Strait, means that diatom blooms in this part of the southern Chukchi happily continue until at least the end of July.”

The second mass of seawater is known as “Alaskan Coastal Water,” which is warmer, less salty, and nutrient-poor. Diatom growth is usually lower in these waters, but coccolithophores can do well here. Some areas pictured here could contain this type of plankton, known to impart a milky turquoise hue to the water with their plates of calcium carbonate armor.

While experts expect blooms to consistently show up in these waters from year to year, the size is less consistent, and the reason is not clear.

“The interannual variability in phytoplankton biomass and growth in Arctic regions is extremely high,” Giesbrecht said. “It’s difficult to link environmental changes to those in the phytoplankton without having a lot more sampling throughout the year and for that sampling to continue on for many years.” 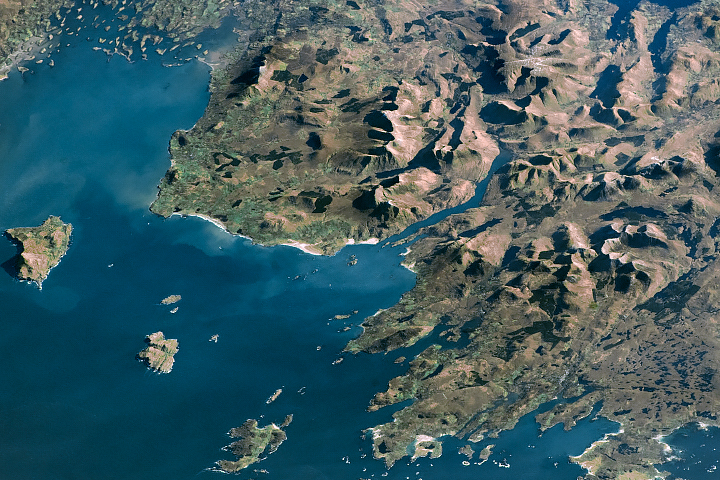