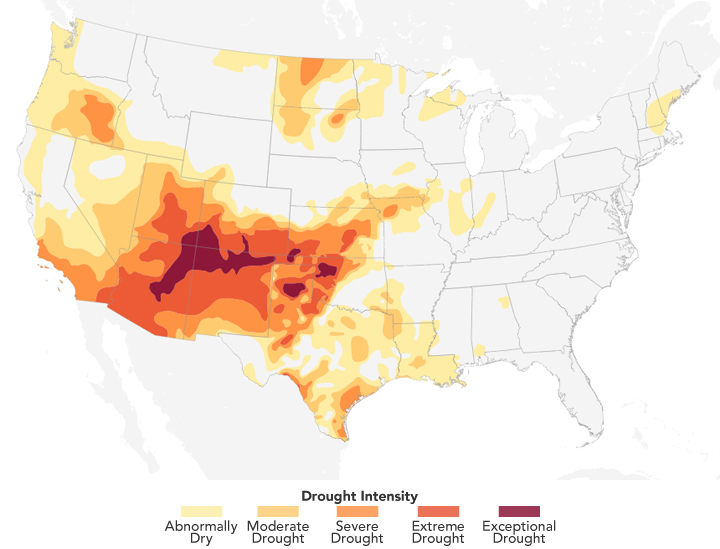 Much of the U.S. Southwest is heading into summer in the throes of a persistent and ever-more severe drought. Temperatures across much of the region in 2018 have been well above the norms, while rainfall and mountain snow have been well below—a recipe for struggling farmers and concerned forest fire managers.

The map above is based on data from the U.S. Drought Monitor, a partnership of the U.S. Department of Agriculture, the National Oceanic and Atmospheric Administration, and the University of Nebraska-Lincoln. It depicts areas of drought in progressive shades of orange to red and is based on measurements of climate, soil, and water conditions from more than 350 federal, state, and local observers around the country. (NASA provides experimental measurements and models to this drought monitoring effort.) 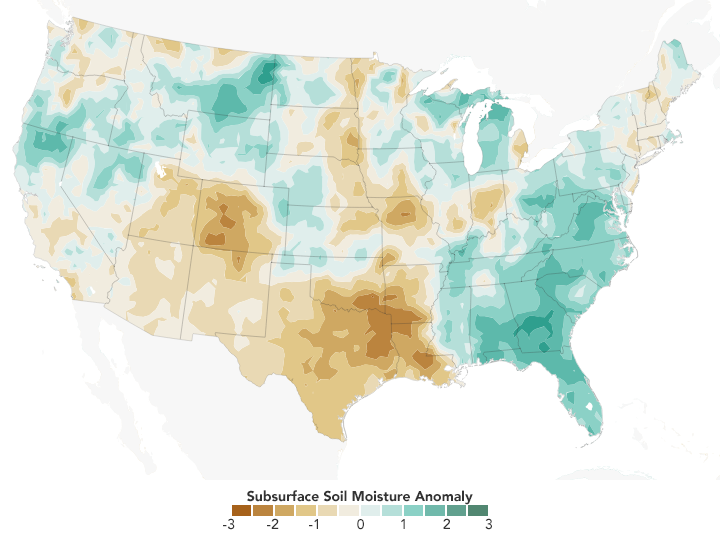 The second map is derived from data collected by the Soil Moisture Active Passive mission (SMAP), the first NASA satellite dedicated to measuring the water content of soils. The satellite uses a radiometer to measure soil moisture in the top 5 centimeters (2 inches) of the ground. The map shows soil moisture anomalies—how much the moisture content was above or below the norm—in the United States in mid-May 2018.

In early May 2018, nearly 200 wild horses were found dead on Navajo Nation lands in Arizona. Water restrictions have been instituted in several parts of New Mexico, as reservoirs dropped to low levels. And the U.S. Forest Service has closed most of 1.6 million-acre Santa Fe National Forest due concerns about wildfires. Managers had banned all campfires in the forest in early May, but after workers found more than 100 unattended campfires (even after the ban), officials felt compelled to close the entire park rather than risk a tragic fire.

The NOAA Climate Prediction Center expects dry conditions in the Southwest to persist through at least June and perhaps the entire summer.

“The drought that has waxed and waned since 1999 still has southwestern water managers scrambling to meet the demands of urban, industrial, and agricultural users,” said Bill Patzert, retired NASA climatologist. “The pattern of dry years outnumbering wet years is normal. History shows that droughts are decades long, not just one or two years.” Patzert’s research suggests that these repeating, multi-decadal droughts are related to slowly shifting patterns of sea surface temperatures in the Pacific Ocean known as the Pacific Decadal Oscillation.

“There are others factors that contribute to drought,” Patzert added. “The decreasing trend in snowpack because of warming; the draining of the great aquifers, mostly by agriculture; the increase of water demand due to the growing population in the West and Southwest; and the impact of a warmer world on water needs—these are all drought makers.”

NASA Earth Observatory images by Joshua Stevens and Lauren Dauphin, using soil moisture data from NASA-USDA and the SMAP Science Team, and data from the United States Drought Monitor at the University of Nebraska-Lincoln. Story by Mike Carlowicz.