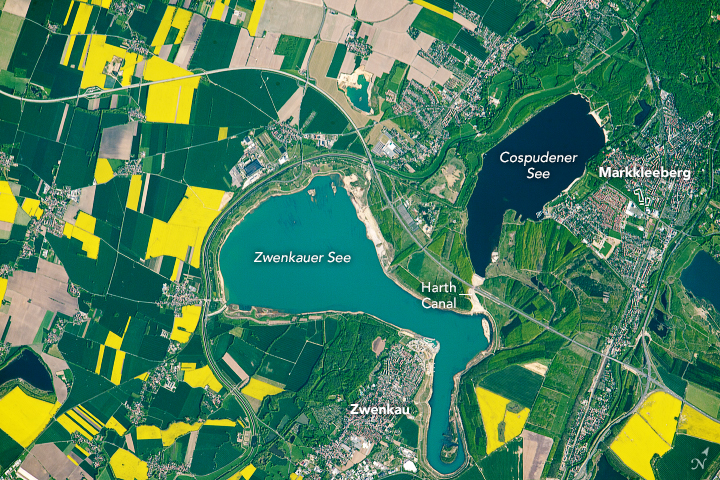 About 200 kilometers (120 miles) southwest of Berlin lies an area of Germany known as Neuseenland (“New Lakelands”). Located in the Leipzig district, this area is the site of a massive project to transform the landscape into a series of lakes and interconnected rivers. In this photograph taken by astronauts aboard the International Space Station, we see two manmade lakes surrounded by rapeseed, wheat, and potato fields.

The Zwenkauer See, first excavated in 1921, and the Cospudener See, dug in 1981, started as open-pit lignite mines. They yielded a combined total of 610 million tons of lignite, a type of brown coal used extensively by Germany. As a result of these mining operations, the nearby land was severely scarred: rivers were redirected, forests were cut down, and thousands of nearby residents were relocated.

Activism by the citizens of Zwenkau and Markkleeberg in the early 1990s resulted in the permanent shutdown of the mines. Rehabilitation of the region began shortly thereafter. Both mines were slowly flooded over a period of eight years through a process of river channeling, and they have become two of the largest lakes in the area. The Harth Canal is now under construction today between the Zwenkauer and Cospudener Sees. It will enable boats to sail from Zwenkau Harbor to the city of Leipzig, about 12 kilometers (8 miles) to the northeast.

Thanks to the development of the lakes, surrounding towns such as Markkleeberg and Zwenkau are becoming more popular with tourists.

Astronaut photograph ISS047-E-108766 was acquired on May 9, 2016, with a Nikon D4 digital camera using an 1150 millimeter lens and is provided by the ISS Crew Earth Observations Facility and the Earth Science and Remote Sensing Unit, Johnson Space Center. The image was taken by a member of the Expedition 47 crew. The image has been cropped and enhanced to improve contrast, and lens artifacts have been removed. The International Space Station Program supports the laboratory as part of the ISS National Lab to help astronauts take pictures of Earth that will be of the greatest value to scientists and the public, and to make those images freely available on the Internet. Additional images taken by astronauts and cosmonauts can be viewed at the NASA/JSC Gateway to Astronaut Photography of Earth. Caption by Sarah Deitrick, Jacobs, and Justin Wilkinson, Texas State University, JETS Contract at NASA-JSC.

New lakes in southern Egypt have been monitored by astronauts since 1998. The flooding was first documented in early November 1998. Subsequently, three additional lakes were created by Lake Nasser overflow, as shown by the above photograph taken in December of 1999.