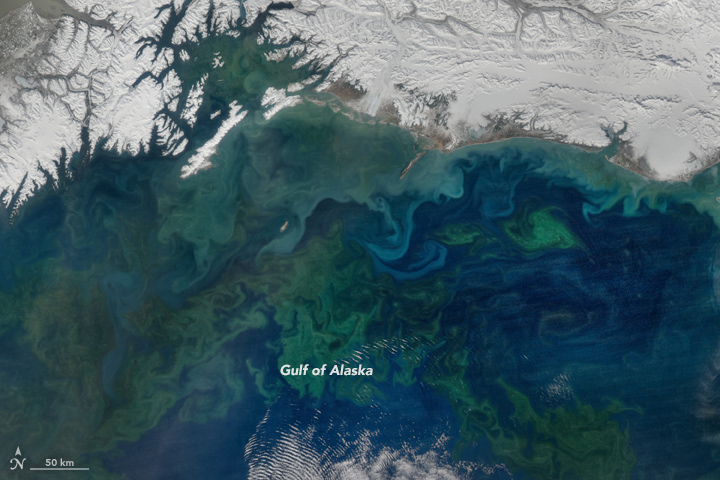 Combine flour and water and what do you get? If it’s “glacial flour”—fine, nutrient-rich sediment—in the Gulf of Alaska, you could see a massive phytoplankton bloom.

That’s what happened around April 12, 2017, when the Moderate Resolution Imaging Spectroradiometer (MODIS) on NASA’s Aqua satellite observed phytoplankton swirling in the waters off Alaska. Glacial or “rock flour,” which is bedrock that has been ground into fine dust by glaciers, turns the water an opaque turquoise. It also promotes the growth of green-colored phytoplankton.

The tiny, plant-like organisms need the iron that flows and blows into the Gulf. Strong winds pick up iron-rich dust from dried lakes and river basins near the Alaskan coast or, occasionally, from puffs of volcanic ash in the atmosphere. Glaciers also release iron-rich sediment as they melt, and water carries it seaward. In the ocean, currents distribute the iron farther from shore, where it combines with nitrate-rich waters to creating fertile conditions for a phytoplankton bloom.

“We generally expect the blooms to start inshore and then propagate out to deeper water as stratification takes place,” said Scott Pegau, a researcher at the Prince William Sound Science Center. In general, the denser, colder, saltier water sinks to the bottom of the ocean, while the warmer, less dense, less salty water floats at the top.

Some ground-based reports indicate that this year’s spring bloom arrived slightly early. “With all the nutrients that were mixed up over the winter, all the components are there for the phytoplankton to take off,” Pegau said. “There are a couple of unusual features, mostly the high chlorophyll in the southeast, which is pretty far off the shelf break.”