Dust Over the Persian Gulf 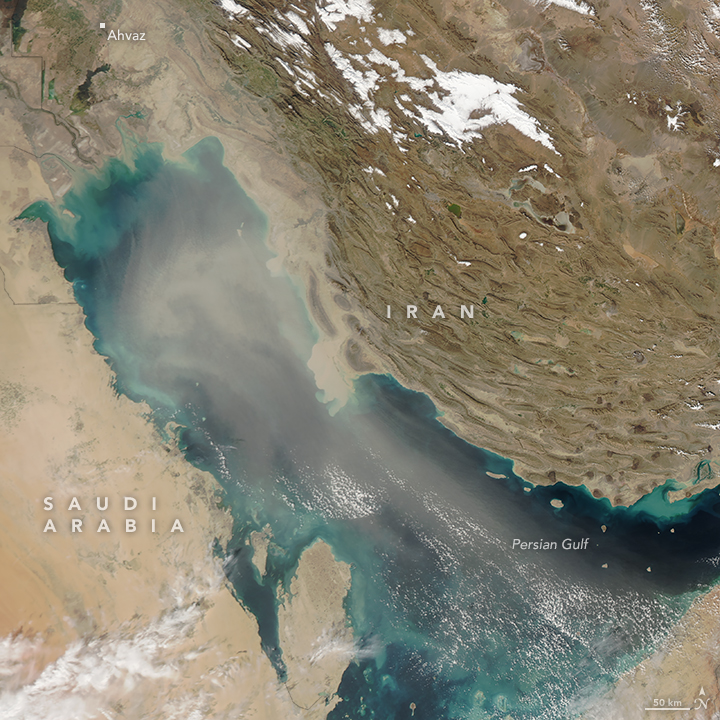 In February 2017, dust storms enveloped the countries bordering the Persian Gulf. The Moderate Resolution Imaging Spectroradiometer (MODIS) on NASA’s Terra and Aqua satellites captured these natural-color images of a storm on February 18 and 19.

The first image (above) was captured at 12:55 p.m. Iran Standard Time (09:25 Universal Time) on February 19, when dust had spread across the length of the Gulf. The day before, winds carried dust across Iraq and Iran toward the southeast. The storm progression is visible in the animation below, made with images acquired in the morning and afternoon on February 18.

Dust storms are common in the region in the summer, and they are often provoked by the shamal—strong winds that blow from the northwest and over the Persian Gulf. But the shamal also occurs sporadically between November and early March.

Drought has increased the likelihood that shamal winds will produce a large dust storm, according to Farhad Vishkaee, a scientist at NTS Optel who studied the winter shamal. The airborne sand and dust can reduce visibility to tens of meters during a storm.

Diana Francis, a scientist at New York University’s Abu Dhabi campus has also studied the shamal and agrees that drought is a “critical factor” for the amount of material that makes it into the air. She specifies that drought has less to do with dust storm frequency, which is influenced more by regional climate conditions. “Drought makes more erodible material available at the surface, so there are more spectacular dust storms once the winds are strong enough.”

The February dust storms were reported to be responsible for damaging electrical infrastructure and knocking out power to cities in Iran’s Khuzestan province. The dust, pollution, and power failures were among the reasons people gathered in Ahvaz to protest, according to The New York Times. The scenario is similar to storms that hit in February 2015, which also reportedly spurred environmental protests in Ahvaz.

Winds carried a large plume of dust over the Persian Gulf.