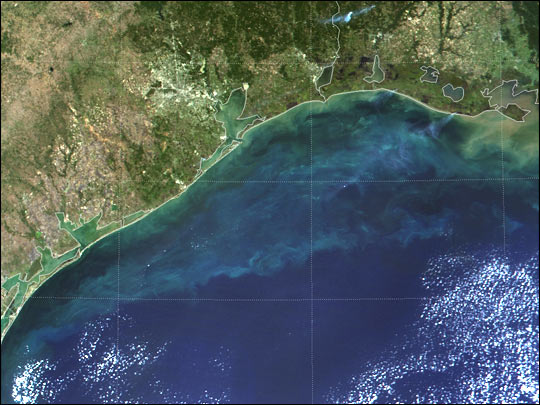 Red tides (algae) bloomed late this summer along a 300-mile stretch of Texas' Gulf Coast, killing millions of fish and shellfish as well as making some people sick. State officials are calling this the worst red tide bloom in 14 years. The algae produces a poison that paralyzes fish and prevents them from breathing. There is concern that the deadly algae could impact or even wipe out this year's oyster harvest in Texas, which usually peaks during the Thanksgiving and Christmas holidays.

The red tides were first observed off the Texas coast in mid-August and have been growing steadily in size ever since. Red tides tend to bloom and subside rapidly, depending upon changes in wind speed and direction, water temperature, salinity, and rainfall patterns (as the algae doesn't do as well in fresher water).

This true-color image of the Texas Gulf Coast was acquired on September 29, 2000, by the Moderate-resolution Imaging Spectroradiometer (MODIS) flying aboard NASA's Terra spacecraft. The red tide can be seen as the dark reddish discoloration in the ocean running southwest to northeast along the coast. In this scene, the bloom appears to be concentrated north and east of Corpus Christi, just off Matagorda Island. The image was made at 500-meter resolution using a combination of MODIS' visible bands 1 (red), 4 (green), and 3 (blue).

For more information about red tides, refer to the Texas Red Tide Website.