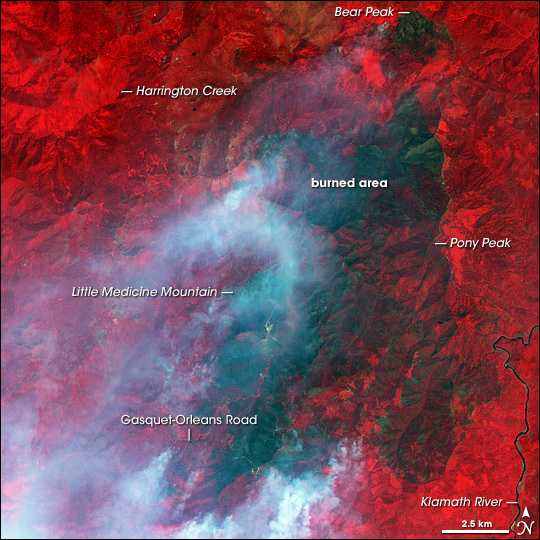 Lightning triggered a complex of forest fires in Northern California’s Klamath National Forest on June 21, 2008. As of July 14, this group of fires, known as the Siskiyou Complex, had grown to affect an estimated 35,400 acres and was about 16 percent contained, according to the National Interagency Fire Center. Firefighters were preparing for at least another month of battle with the blaze.

This false-color image was made from visible and infrared data collected by the Advanced Spaceborne Thermal Emission and Reflection Radiometer (ASTER) on NASA’s Terra satellite on July 13. The image centers on the largest of the fires in the Siskiyou Complex, which is the Dark Three Fire. The burned area is charcoal-colored, while surrounding forest and other vegetation is red. Water is dark blue. The western perimeter of the fire is hidden by smoke.

Several landmarks and features are labeled. The burned area stretches all the way from Bear Peak in the north to beyond the Gasquet-Orleans Road in the southwest (commonly called the “G-O Road.”) Some areas appear to have been more heavily damaged than others. Western areas seem more uniformly dark, while eastern areas have more red mixed with charcoal colors, indicating not all vegetation burned. (This effect, however, could be due to shadows cast by the topography or the smoke in the western part of the burned area.)

The fires are burning in very rugged and steep terrain with few roads and with stands of large trees. Although the area is not very populated, the forest is the site of significant Karuk and Yurok Tribal cultural and religious sites, which are at risk.

Lightning triggered a complex of forest fires in Northern California’s Klamath National Forest on June 21, 2008. The image centers on the largest of the fires in the Siskiyou Complex.