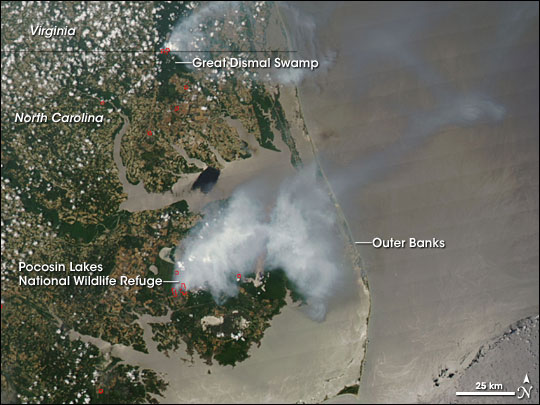 Thick smoke from two large fires in North Carolina and Virginia traveled up the East Coast in mid-June 2008, affecting air quality in numerous cities and towns, including the nation’s capital. The Evans Road Fire had burned over 41,000 acres of the Pocosin National Wildlife Refuge as of Sunday, June 15, while the South 1 Fire in the Great Dismal Swamp had burned about 1,500 acres.

This natural-color image of Virginia and North Carolina was captured by the Moderate Resolution Imaging Spectroradiometer (MODIS) on NASA’s Aqua satellite on Saturday, June 14, 2008. Places where the sensor detected actively burning fires are outlined in red. Smoke billows out over the sounds that separate mainland North Carolina from the islands known as the Outer Banks. (The large version of the image shows smoke spreading far up the eastern seaboard.) The washed-out appearance of the coastal waters is due to sunglint, the mirror-like reflection of sunlight into the sensor’s “eye.”

The Evans Road Fire was started by lightning on June 2, while the South 1 Fire appears to have been sparked by machines removing trees downed by Hurricane Isabel. According to local news reports, the fire in the Great Dismal Swamp is a great setback for refuge managers who were trying to clear and restore habitat for eastern white cedar trees. Historically, white cedars were abundant in the swamp, but they have been replaced by other species because of logging and other human land use impacts.

Both fires have the potential to generate lots of smoke because swamps have thick layers of peat—partially decayed vegetation that accumulates in soggy environments. When peat does dry out, it can fuel stubborn fires that smolder for months.

Twice-daily images of the area are available from the MODIS Rapid Response Team Website.

Thick smoke from two large fires in North Carolina and Virginia traveled up the East Coast in mid-June 2008, affecting air quality in numerous cities and towns.

A lightning-triggered fire in a North Carolina wildlife refuge and a human-caused fire in the Virginia portion of the Great Dismal Swamp spread smoke over a wide area in mid-June 2008.