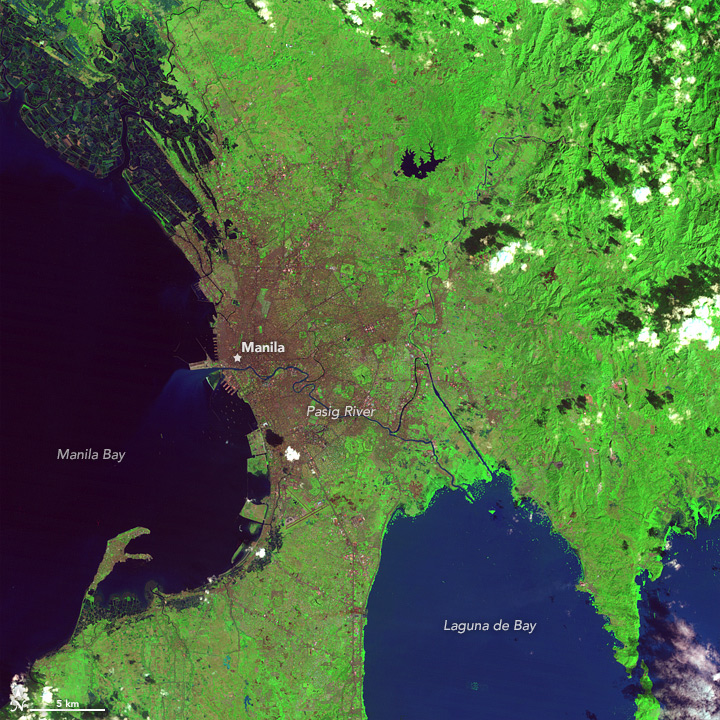 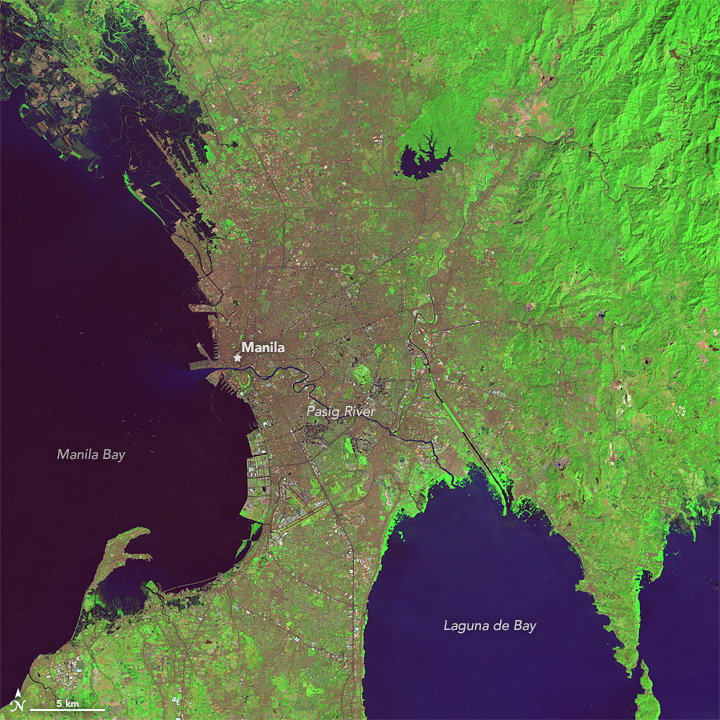 White-flowered mangroves—nila in Tagalog—once crowded the shores of the Pasig River, a tidal waterway in the Philippines that connects Laguna de Bay with the South China Sea. The flowers were so numerous that the settlement at the western end of the river came to be known as Manila, which means: “There is nila here.” Today, mangroves are considerably harder to find. The urbanized river became so heavily polluted as factories and shantytowns grew up along it that ecologists declared its waters biologically dead in the 1990s.

As shown in this pair of satellite images, growth has been particularly rapid in the last few decades. On January 31, 1988, the Thematic Mapper on Landsat 5 acquired the top image; on February 7, 2014, the Operational Land Imager on Landsat 8 acquired the bottom image. Rural areas—mainly farmland and forest—appear light green. Urban areas are gray. Turn on the comparison tool to slide between the two images, and download the large images to observe the changes on a finer scale.

In 2015, a team of World Bank researchers released a study that details urbanization trends in East Asia. To ensure they were using a common metric across cities and countries, the researchers based their analysis on satellite data collected by the Moderate Resolution Imaging Spectroradiometer (MODIS) and land cover data from the Landsat program. They also used demographic data prepared by the AsiaPop project.

Between 2000 and 2010, Manila’s urban spaces—defined as areas where the built environment covered more than 50 percent of the landscape in a given pixel—had expanded from 1,800 square kilometers to 2,300 square kilometers (2.4 percent per year). The expansion was the sixth highest in Asia in both absolute and proportional terms. During the same period, the population increased by about six million people. Most of the new growth has occurred in neighboring provinces rather than Manila proper. Cavite, Bulacan, and Laguna—provinces to the south, north, and southeast—have all seen major growth.

Such intensive development has taken a serious toll on the Pasig River. With high loads of sewage, industrial effluents, floating garbage, and heavy metals, the river is known as one of the most polluted waterways in the world. However, there are signs that the river may have a cleaner future. The Philippine’s Department of Environment and Natural Resources plans to plant 1.5 billion mangrove trees along a 19-kilometer-stretch of the river. Mangroves can improve water quality by trapping sediments and taking up excess nutrients from the water.