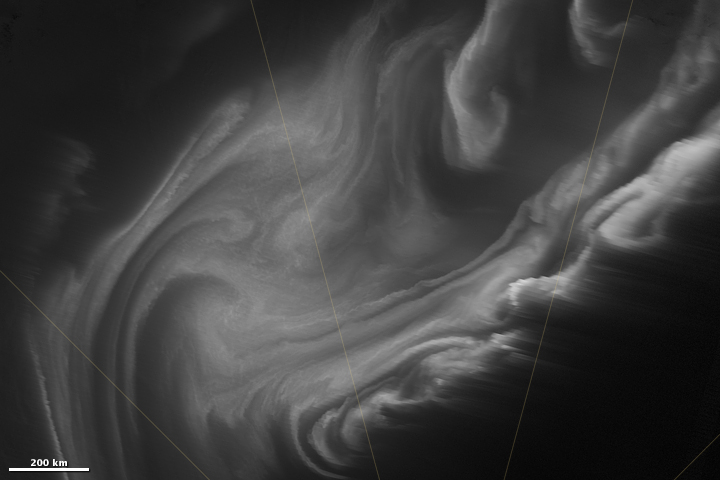 Mid-summer brings the longest days in the northern hemisphere and the shortest in the southern hemisphere. This year, it also brought an atmospheric light show known as the aurora. Storms from the Sun—solar flares and coronal mass ejections (CMEs)—sent streams of particles and electromagnetic energy toward Earth and stirred up our atmosphere with nighttime light shows that surrounded both Poles and even stretched deep into middle latitudes.

The Visible Infrared Imaging Radiometer Suite (VIIRS) on the Suomi NPP satellite acquired this view of the aurora australis, or “southern lights,” over Antarctica in the early morning hours of June 24, 2015. The atmospheric light show was captured by the VIIRS “day-night band” (DNB), which detects dim light signals such as auroras, airglow, city lights, and reflected moonlight. In the image above, the sensor detected visible light emissions as energetic particles from Earth’s magnetosphere rained down into the gases of the upper atmosphere.

For the past two weeks, sunspot AR12371 has been crackling with flares, radio bursts, and solar storms as it has moved across the Earth-facing side of the Sun. Overnight on June 20-21, that active region launched a CME toward Earth that caused a severe geomagnetic storm on June 22-23. Skywatchers as far south as Texas reported aurora borealis on the horizon. Another flare burst from the region early on June 23 and may be connected with the activity shown at the top of this page. Still another Earth-directed CME exploded from the Sun on June 25, and space weather forecasters were anticipating more atmospheric light shows on June 27.

Auroras occur when solar flares and coronal mass ejections—or even strong solar wind streams—disturb and distort the magnetosphere, the space protected by Earth’s magnetic field. The collision of pressure waves and solar particles into the magnetosphere accelerates particles trapped in the space around Earth (such as in the radiation belts). Those particles flow down into Earth’s upper atmosphere (about 100 to 400 kilometers in altitude) where they excite oxygen and nitrogen molecules and release photons of light. The results are rays, sheets, and curtains of light in the sky centered around both of Earth’s magnetic poles.

NASA astronaut Scott Kelly captured several photographs of the auroral storms from his perch on the International Space Station on June 22 and June 23.

NASA Earth Observatory image by Jesse Allen, using VIIRS day-night band data from the Suomi National Polar-orbiting Partnership. Suomi NPP is the result of a partnership between NASA, the National Oceanic and Atmospheric Administration, and the Department of Defense. Caption by Mike Carlowicz. 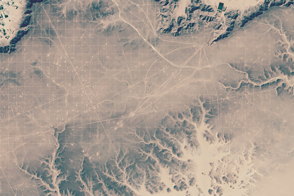