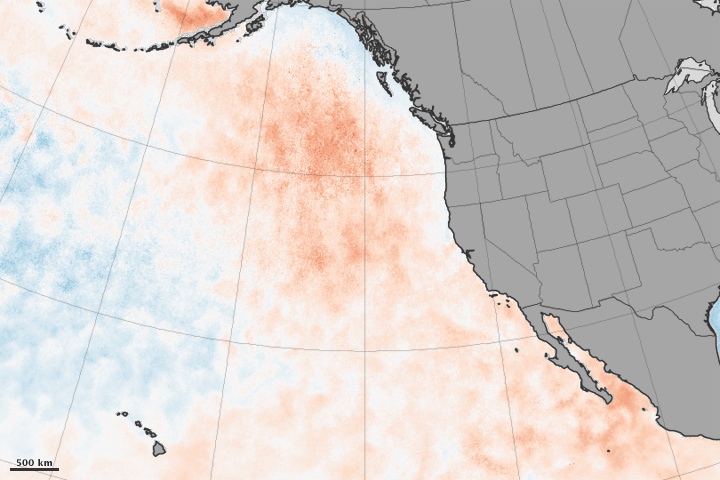 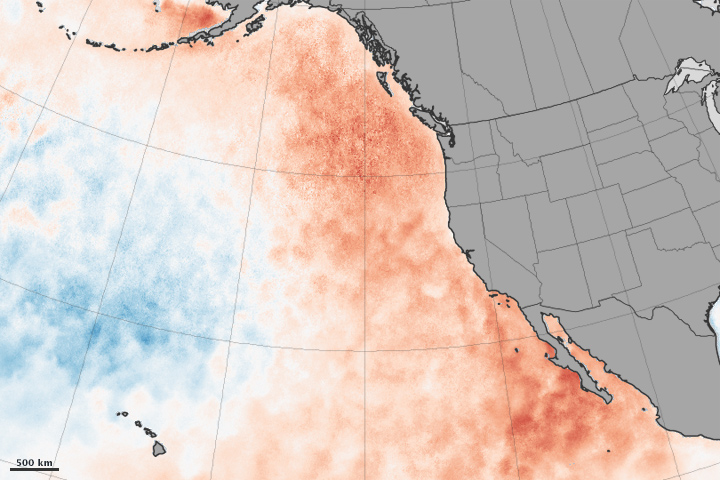 The weather in North America, particularly in winter, has been unusually extreme for much of the past two years. The western half has endured record-setting heat and, in many places, persistent and debilitating drought. The eastern half of North America has faced record cold and snow.

The causes are complex and have provoked lively discussion in the scientific community. Are ocean circulation and warming patterns in the Pacific altering atmospheric patterns over land? Or are atmospheric conditions driving the unusual conditions in the water? Are these short-term anomalies or decades-long changes at work? The answer has yet to be teased out, but it is probably a muddle of all of these things.

One thing is clear: the eastern Pacific Ocean has been warmer than normal since the winter of 2013–2014. The maps above show sea surface temperature anomalies in the Pacific in April 2014 (top) and March 2015 (bottom). The maps do not depict absolute temperatures; instead, they show how much above (red) or below (blue) water temperatures were compared to the long-term average from 2003 to 2012.

The maps were built with data from the Microwave Optimally Interpolated SST product, a NASA-supported effort at Remote Sensing Systems. The research team combines measurements from the U.S. Navy’s WindSAT instrument on the Coriolis satellite and the AMSR2 instrument on Japan’s GCOM-W. The sensors observe emissions of microwaves and infrared light from the sea surface, capturing the temperature of the top few millimeters of the water.

According to a paper published on April 6, 2015, in Geophysical Research Letters, a large parcel of the northeastern Pacific became exceptionally warm and calm in the winter of 2013-14, and that pattern has continued. The patch of water—1,600 kilometers (1,000 miles) wide and as much as 100 meters (300 feet) deep—sat below a strong and persistent ridge of high atmospheric pressure that kept winds light. The fair weather kept surface waters from mixing; cooler waters from the deep did not rise, nor did cooler currents from near Alaska. This also meant less heat and moisture rose into the atmosphere.

Water temperatures stayed at least 2.5° Celsius (4.5° Fahrenheit) above normal, and the effects have rippled through the marine environment. This warm “blob,” as researchers began to call it, saw significantly reduced chlorophyll levels—fewer phytoplankton. With less food in the region, Pacific Northwest and California Current fish species started appearing in the waters off Alaska. Sea birds and sea lions were dying off or becoming emaciated because of a lack of food.

And the ripples likely extended up to the atmosphere. “The extra mixed layer heat persisted through the summer of 2014, and may have represented a significant contribution to the unusually warm summer (in some locations record high temperatures) observed in the continental Pacific Northwest,” the journal authors wrote.

In a separate paper from March 2015, Dennis Hartmann of the University of Washington combined historical data with several computer models to assert that the unusual weather events across North America are likely connected to changes in the tropical and subtropical Pacific. He pointed to the recent El Niño pattern, to the Pacific Decadal Oscillation, and to a pattern known as the North Pacific Mode. All have sent waves rippling across the atmosphere and altering circulation patterns.

“It’s an interesting question if that’s just natural variability happening or if there’s something changing about how the Pacific Ocean decadal variability behaves,” said Hartmann in a University of Washington press release. “Maybe it will go away quickly and we won’t talk about it anymore, but if it persists for a third year, then we’ll know something really unusual is going on.”

Bill Patzert, a climatologist at NASA’s Jet Propulsion Laboratory, added that “the appearance of the ‘blob’ and other changes in temperatures, wind patterns, and ocean currents may indicate that the Pacific Ocean is shifting from a cool, dry phase to a warm, wet phase of the Pacific Decadal Oscillation. Past similar shifts have signaled wetter winters in the West and more benign winters in the upper Midwest and Northeast, a flip-flop from the past few winters.”