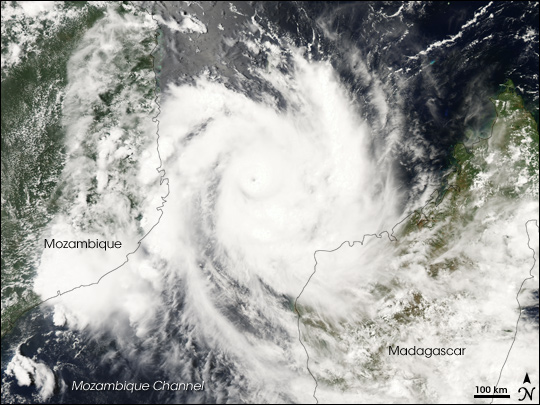 The compact Tropical Cyclone Jokwe had just skimmed past northern Madagascar and was moving south into the Mozambique Channel when the Moderate Resolution Imaging Spectroradiometer (MODIS) on NASA’s Aqua satellite captured this photo-like image on March 7, 2008. Loose bands of clouds circle a tightly packed core and a small, but defined eye that resembles a pin prick in a field of white. Though small, the cyclone was expected to bring winds and heavy rain to coastal Mozambique as it tracked south along the shore. At the time MODIS acquired this image on the afternoon of March 7, Jokwe had winds estimated at 160 kilometers per hour (100 miles per hour or 85 knots) with gusts to 190 km/hr (120 mph or 105 knots), said the Joint Typhoon Warning Center.

Jokwe follows in the wake of powerful Cyclone Ivan, which devastated Madagascar between February 17 and February 19, 2008. As of February 29, the death toll from Cyclone Ivan had surpassed 80, reported Reuters. Fortunately, Jokwe’s path did not take the storm over parts of Madagascar affected by Ivan.

You can download a 250-meter-resolution KMZ file of Cyclone Jokwe suitable for use with Google Earth.

Tropical Cyclone Jokwe had just skimmed past northern Madagascar and was moving south into the Mozambique Channel on March 7, 2008.