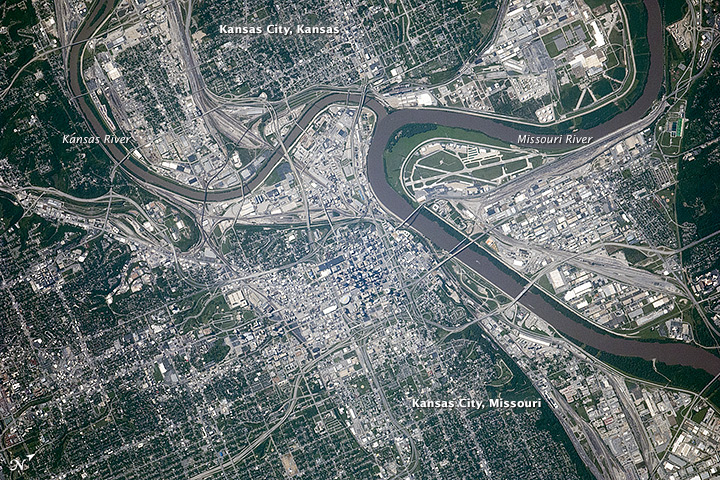 The Missouri and Kansas rivers meet in this space-based view of the Kansas City metropolitan area, photographed on September 6, 2014, by astronauts on the International Space Station. Portions of the Missouri River and State Line Road trace the boundary between the states of Kansas and Missouri. (Note that north is to the upper right.)

According to the U.S. Census Bureau, about 467,000 people live in Kansas City, Missouri, which spans 816 square kilometers (315 square miles). More than 148,000 people lived across the state line in Kansas City, Kansas, which spans about 324 square kilometers (125 square miles). That's plenty of fans to get behind the Kansas City Royals, who are facing the San Francisco Giants in baseball's 2014 World Series. The teams battled it out in late October at Kauffman Stadium, located along Interstate 70 about 18 kilometers (11 miles) southeast of the river confluence (off the bottom of this photograph).

Just south of I-670 and east of the Kansas River in this photo is the site where the American Royal Association hosts barbecue competitions, livestock exhibitions, rodeos, and horse shows. In recognition of Missouri's livestock industry, the baseball team was named the "Royals" when they were first organized in 1968.

Before the Royals, the city was home to the Kansas City Monarchs, a Negro League baseball team that once featured legends Jackie Robinson and Satchel Paige. In 1924, the Monarchs won the first Negro League World Series. Visitors to Kansas City's Negro Leagues Baseball Museum can tour exhibits preserving the history of the leagues.

At the time this caption was published, the Royals and Giants were tied in the 2014 World Series with one win apiece. The teams travelled to San Francisco for games three, four, and five, and might return to Kansas City if sixth and seventh games are necessary.

Not to be overlooked, San Francisco's AT&T Park (formerly SBC Park)—home of the Giants—is visible in the lower left of this Earth Observatory image from 2004. You can also see a night view of the Bay Area here.

Astronaut photograph ISS040-E-124239 was acquired on September 6, 2014, with a Nikon D2Xs digital camera using an 800 millimeter lens, and is provided by the ISS Crew Earth Observations Facility and the Earth Science and Remote Sensing Unit, Johnson Space Center. The image was taken by the Expedition 40 crew. It has been cropped and enhanced to improve contrast, and lens artifacts have been removed. The International Space Station Program supports the laboratory as part of the ISS National Lab to help astronauts take pictures of Earth that will be of the greatest value to scientists and the public, and to make those images freely available on the Internet. Additional images taken by astronauts and cosmonauts can be viewed at the NASA/JSC Gateway to Astronaut Photography of Earth. Caption by Kathryn Hansen.

The hometown of a 2014 World Series contender is brimming with baseball history.