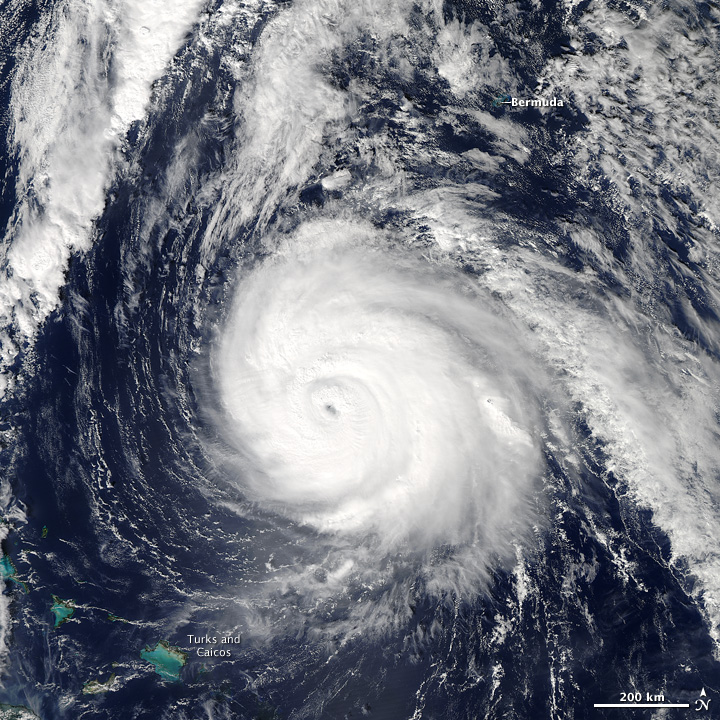 The most intense hurricane of the 2014 Atlantic season was forecast to pass directly over Bermuda on October 17. The Bermuda Weather Service expected hurricane force winds to arrive in the afternoon, with the most destructive winds battering the island through the evening. Seas in nearby Atlantic waters were building to 35 to 40 feet. Meteorologists were predicting 3 to 6 inches of rainfall and potentially life-threatening storm surges.

The Moderate Resolution Imaging Spectroradiometer (MODIS) on NASA’s Aqua satellite acquired this natural-color image of Hurricane Gonzalo at 12:45 p.m. Atlantic Daylight Time (1745 Universal Time) on October 16, 2014. At the time, the category 4 hurricane had sustained winds of 125 knots (145 miles or 230 kilometers per hour) and a central pressure of 942 millibars. (Click here for a view of the storm on October 17, 2014.)

Bermuda, which took a partial hit on October 12 from Tropical Storm Fay, has only seen 10 hurricane centers pass within 120 kilometers (75 miles) since 1899, according to The Weather Channel. The last major hurricane to strike Bermuda was Fabian in September 2003. That storm brought 190 kilometer (120 mile) per hour winds and a 3-meter (10-foot) storm surge.

Long-range forecasts for Gonzalo show the storm staying at hurricane force as far north as 50° latitude and brushing the edges of Nova Scotia. Meteorologists in Great Britain anticipated heavy rainfall and winds by October 20, when remnants of Gonzalo were expected to reach that island.

The time-lapse animation below shows the evolution of Gonzalo (viewed in infrared, but overlaid on the Blue Marble) from midday on October 13 to midday on October 17, 2014. Images were acquired by the GOES-East geosynchronous weather satellite, which was built by NASA and is operated by the National Oceanic and Atmospheric Administration.

The most potent hurricane of the 2014 Atlantic season was poised to pass directly over the British island territory. 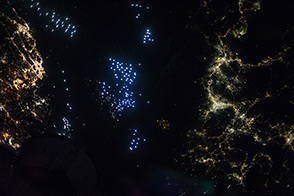 The most potent storm of the 2014 Atlantic hurricane season tracked from the edge of the Caribbean to Bermuda, with potential impacts expected as far as Nova Scotia and the United Kingdom. 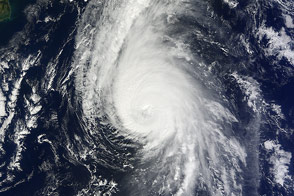