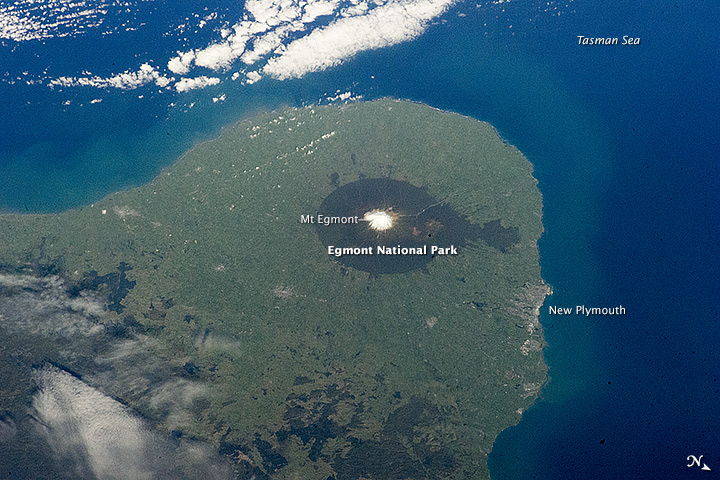 Crews aboard the International Space Station recently captured this photograph of the prominent, circular Egmont National Park in New Zealand. The park protects the forested and snow-capped slopes of Mount Egmont. The protected area was designated in 1900, setting up a radius of 10 kilometers (6 miles) centered on the volcanic peak. The curved shoreline of the promontory has been formed by volcanic lava flows spreading out from the volcano on many occasions. In turn, sediments eroding from the coast ring the peninsula with a faint arc of lighter-colored water.

Also known by its Maori name—Taranaki—Mt. Egmont stands 2,518 meters (8,260 feet) tall and it is one of the world’s most symmetric volcanoes. It first became active about 135,000 years ago. By dating lava flows, geologists have figured out that smaller eruptions at Mount Egmont occur roughly every 90 years and major eruptions every 500 years.

In the photo, the town of New Plymouth stands out from the surrounding agricultural lands as a gray patch. Other smaller towns stretch out across the plain on the inland side of the volcano. A nadir, or straight-down looking, photo of the volcano was taken from the space shuttle in 2002.

Astronaut photograph ISS041-E-049111 was acquired on September 30, 2014, with a Nikon D3S digital camera using a 200 millimeter lens, and is provided by the ISS Crew Earth Observations Facility and the Earth Science and Remote Sensing Unit, Johnson Space Center. The image was taken by the Expedition 41 crew. It has been cropped and enhanced to improve contrast, and lens artifacts have been removed. The International Space Station Program supports the laboratory as part of the ISS National Lab to help astronauts take pictures of Earth that will be of the greatest value to scientists and the public, and to make those images freely available on the Internet. Additional images taken by astronauts and cosmonauts can be viewed at the NASA/JSC Gateway to Astronaut Photography of Earth. Caption by M. Justin Wilkinson, Jacobs at NASA-JSC.