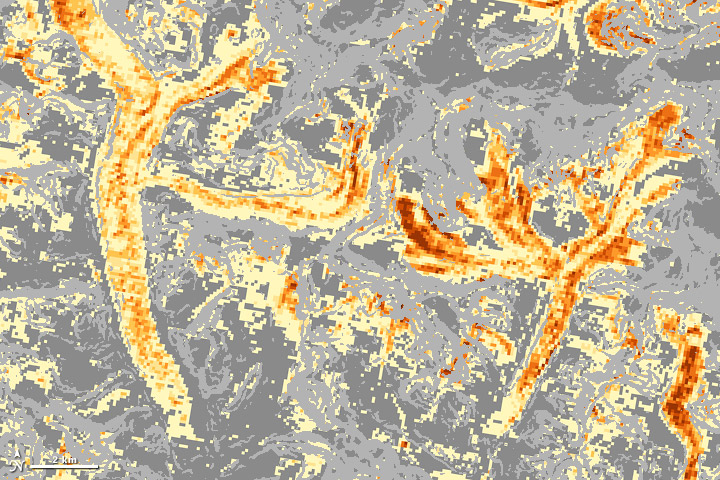 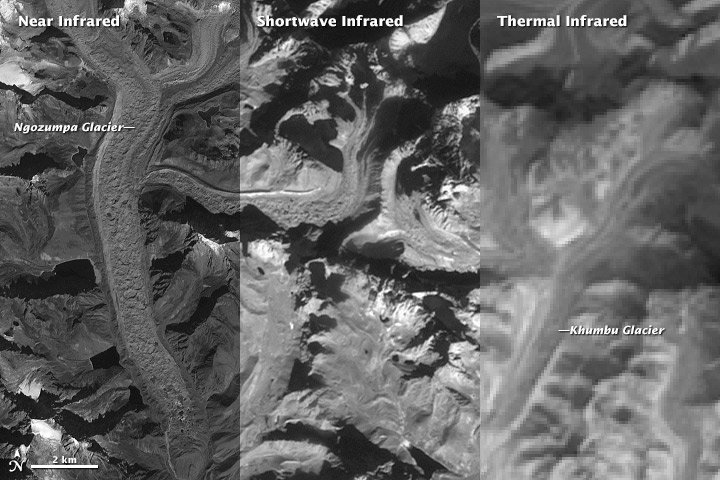 While the human eye perceives only a narrow portion of the electromagnetic spectrum, satellite instruments can sense a much broader range of wavelengths. Many sensors are tuned to be sensitive to specific parts or bands of the spectrum—such as the infrared—that are invisible to human eyes.

The Advanced Spaceborne Thermal Emission and Reflection Radiometer (ASTER) instrument—built by Japan’s Ministry of Economy, Trade, and Industry for NASA’s Terra satellite—observes six bands in the shortwave infrared (just beyond red light at 1.0 to 2.5 microns) and five in the thermal infrared (3 to 12 microns). The Enhanced Thematic Mapper Plus (ETM+) and Operational Land Imager (OLI) on Landsats 7 and 8 also have bands in the shortwave and thermal infrared. (See this page for a graphic showing the location of ASTER’s bands.)

NASA scientist Kimberly Casey has mined data from numerous spectral bands to generate maps of debris on key glaciers around the world. Her maps not only discriminate between dirty and clean ice; they describe the composition of the debris. This is important because the type of debris can affect the melting rate of glacial ice and can influence how it responds to climate change.

The ability to observe different wavelengths is critical because different types of debris—rocks from landslides, volcanic ash, airborne dust, or polluting soot—leave unique “spectral fingerprints” that satellites can measure. By analyzing the ASTER data above, for instance, Casey mapped the silica content of glacial debris on Khumbu and Ngozumpa.

In the top image, rock debris with higher silica content (granite) is shown in shades of orange and red, while debris with less silica (gneiss) is shades of yellow. While both glaciers contain silica-rich debris, Casey’s map shows that Khumbu glacier has much more distinct bands. Silica-rich rocks tends to absorb less sunlight than debris shed by darker debris rich with amphibolite and basalt that Casey analyzed on other glaciers as part of her project.

In addition, Casey thinks that silica maps of glacial debris will prove useful for monitoring the speed that glaciers flow and for identifying weathering processes affecting surface debris. To learn more about Casey’s research, read our new feature: “Painted Glaciers.” 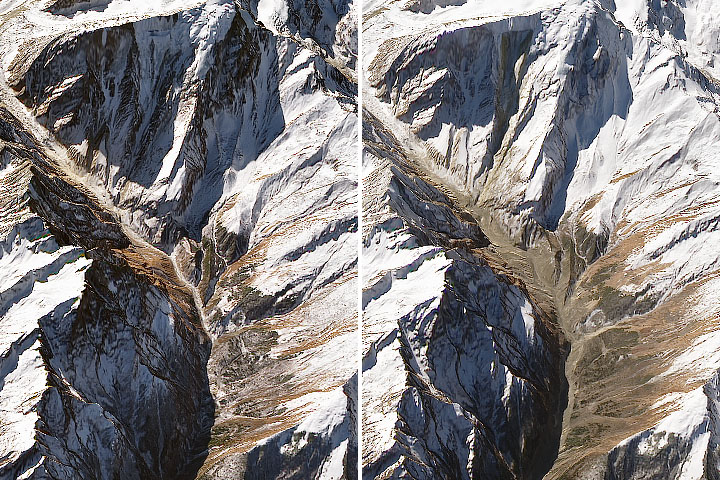