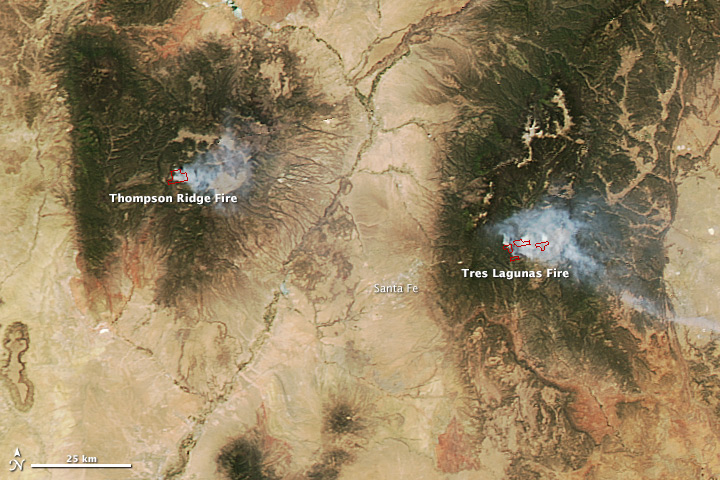 In early June 2013, extreme drought fueled the first major blazes of the wildfire season in New Mexico. Large fires burned in forested areas both east and west of Sante Fe, and at times winds sent plumes of smoke blowing into the city.

According to firefighting agencies in New Mexico, the Tres Laguna fire had spread across nearly 8,000 acres by 9:00 a.m. on June 3; the Thompson Ridge fire had spread 2,000 acres by the same time. The fires were being fought by hundreds of firefighters on the ground and by helicopters and air tankers. Both blazers were less than 5 percent contained on Monday morning.

An assessment of wildfire vulnerability issued by the National Interagency Fire Center in early June pointed out that much of the New Mexico had received less than half the normal amount of rain in May. About 81 percent of the state was in either extreme or exceptional drought, according to the U.S. Drought Monitor. New Mexico will be at a high risk of wildfire throughout the hot and dry month of June, but wetter conditions should arrive in July when weather patterns shift and the North American monsoon brings more rain to the state.