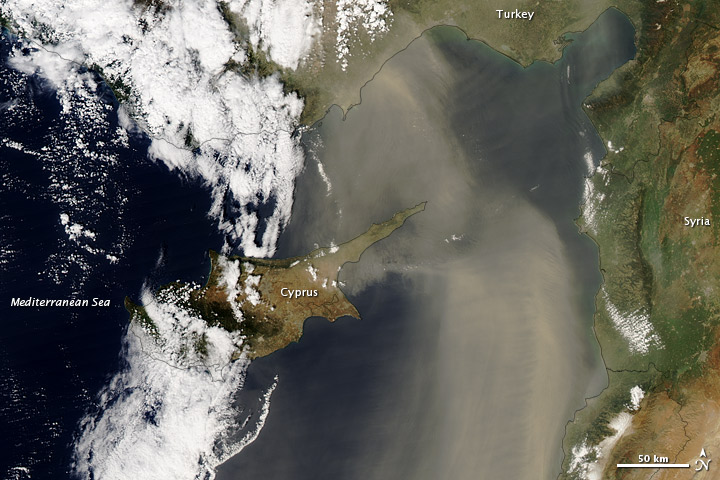 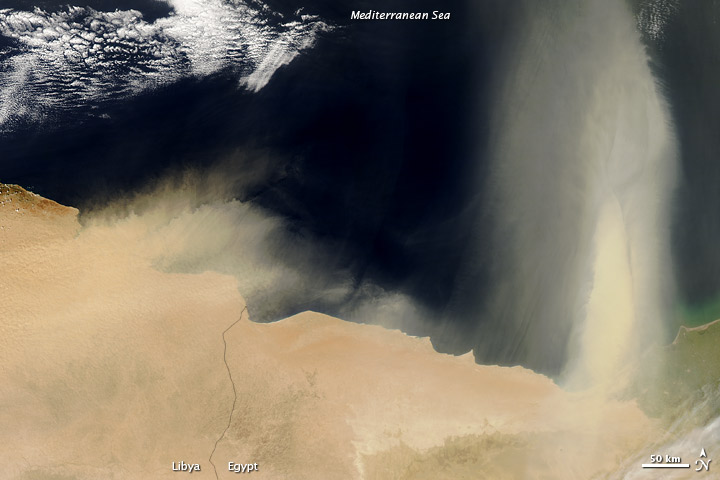 Dust plumes blew over the Mediterranean Sea in early April 2013. Thick plumes hovered off the coasts of Libya and Egypt on April 7 and spanned the sea’s eastern shoreline the following day, reaching as far north as Turkey. The Moderate Resolution Imaging Spectroradiometer (MODIS) on NASA’s Aqua satellite captured these natural-color images on April 8 (top) and April 7 (bottom).

On April 7, the plumes were thick enough to completely hide the land and water surfaces along the coasts of Libya and Egypt. In Libya, the coastal region enjoys a milder, moister climate than the inland desert. In Egypt, the land is fertile along the Nile River Valley and in the Nile Delta. Away from the Libyan coast and the Nile Valley, however, sandy desert spans hundreds of kilometers. The sand provides ample material for dust storms, and the desert’s dearth of vegetation leads to substantial daytime heating of the ground surface. This creates instability in the lowest level of the atmosphere, increasing the likelihood that wind will stir dust storms. Such storms often increase in the springtime.

This sequence of images shows how a natural hazard arising in one place soon affects another. Dust stirring in Egypt did not stay there for long. It blew northward over the Mediterranean Sea, passing over parts of Cyprus and Turkey. Although not as thick as the dust along the northern African coast the previous day, the plume was still conspicuous in satellite imagery on April 8. It formed just days after another plume in the same region. On April 3, news reports from Cyprus carried warnings that sensitive individuals should stay indoors to avoid breathing dust particles.

Acquired April 7 and 8, 2013, these images show dust plumes over the Mediterranean Sea. 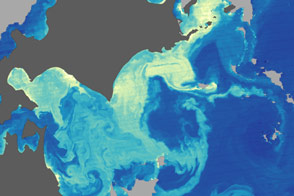 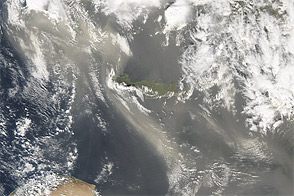 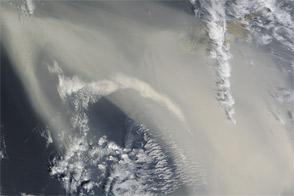 Saharan dust blew over the eastern Mediterranean Sea at the beginning of April 2013.

Dust over Egypt, Libya, and the Mediterranean Sea

Acquired October 1, 2010, this natural-color image shows a dust plume over Egypt, Libya, and the Mediterranean Sea.

Dust storms out of Egypt