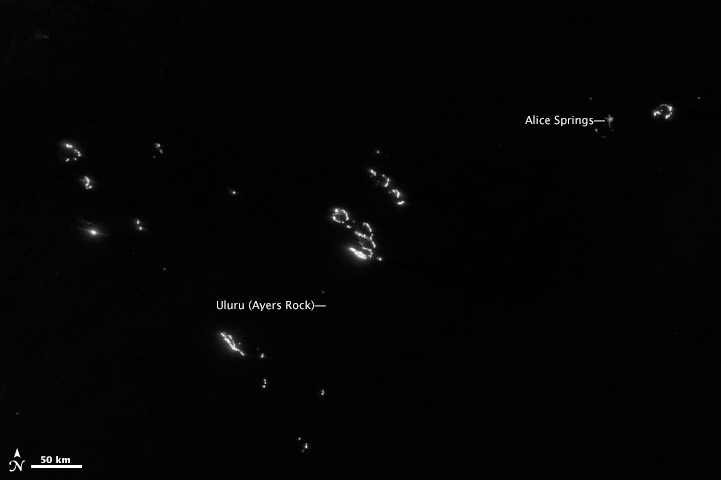 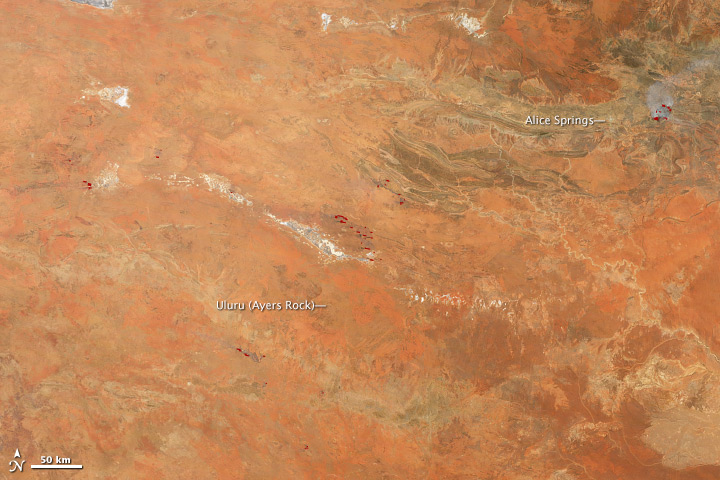 An intense heat wave that struck Australia in January 2013 fueled damaging fires not only in Tasmania but in Australia as well.

On January 9, the Visible Infrared Imaging Radiometer Suite (VIIRS) on the Suomi-NPP satellite captured this nighttime view of fires burning in Australia’s Northern Territory. Numerous fires were burning, some east of Alice Springs and others in the vicinity of Ayer’s Rock.

The top image is from the instrument’s “day-night band,” which sensed the fire in the visible portion of the electromagnetic spectrum. The brightest fires are white; some lights from human settlements are also visible. The lower image, acquired by the Moderate Resolution Imaging Spectroradiometer (MODIS) on NASA’s Terra satellite, shows the same area during daylight hours.

The fire east of Alice Spring destroyed four buildings at Ross River Resort. One of the other fires closer to Ayer’s Rock forced authorities to evacuate Kings Canyon Resort in Watarrka National Park.

Extremely high temperatures have fueled the fires. On January 11, central Australia was in the midst of a record-breaking heatwave, with nine consecutive day above 42°Celsius (108°Fahrenheit) in Alice Springs and eight days in a row above 44°Celsius (111°Fahrenheit) at Yulara, near Ayer’s Rock.

This heat wave, like all extreme weather events, has its direct cause in a complex set of atmospheric conditions that produce short-term weather. However, weather occurs within the broader context of the climate, and there’s a high level of agreement among scientists that global warming has made it more likely that heat waves of this magnitude will occur.