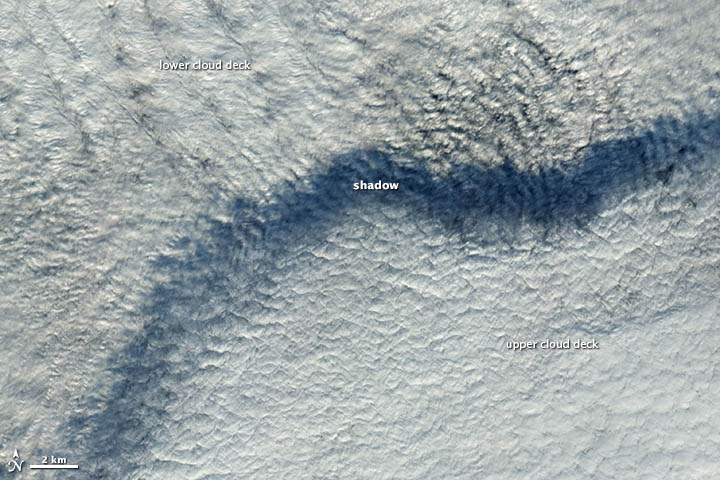 On November 20, 2012, the Advanced Land Imager (ALI) on the Earth Observing-1 (EO-1) satellite acquired this image of a layer of clouds casting a distinctive shadow on another cloud layer below. The upper deck was more than 1 kilometer (0.6 miles) above the ground; the lower layer was less than 1 kilometer up. Both were comprised of stratus clouds, a low-lying type that tends to be uniform and flat. When ALI acquired the image, the clouds were over northeastern Germany, near Harz National Park.

While local meteorological conditions affect cloud height, the latitude at which clouds form is also important. Almost all clouds exist in the lowest area of the atmosphere, the troposphere. However, the depth of the troposphere varies depending on the latitude. The troposphere is thinner near the poles than the equator, so clouds can occur at higher levels in the tropics than they do at high- and mid-latitudes.

ALI provides some of the highest resolution imagery currently collected by NASA’s fleet of Earth-observing satellites. At full resolution, each pixel of an ALI scene corresponds to 10 meters (33 feet) of the Earth’s surface. For comparison, the Moderate Resolution Imaging Spectroradiometer (MODIS) on Aqua and Terra acquires imagery in which each pixel corresponds to 250 meters (820 feet) of Earth’s surface. The company GISAT maintains lists of high-resolution and low-resolution Earth-observing satellite sensors.

A overlying deck of stratus clouds over northeastern Germany cast this distinctive shadow on another layer of clouds below.