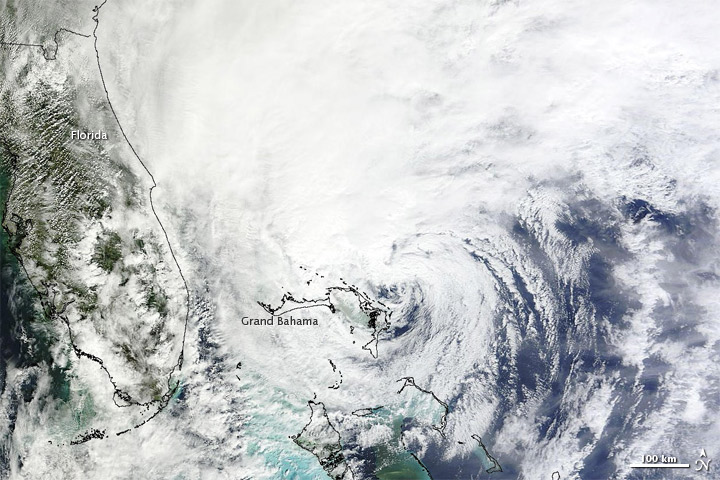 On October 26, 2012, Hurricane Sandy churned over the Bahamas, with the eye of the storm near the island of Grand Bahama. The U.S. National Hurricane Center (NHC) reported that Sandy was a Category 1 hurricane with maximum sustained winds of 75 miles (120 kilometers) per hour. The NHC five-day track showed Sandy heading northeastward over the Atlantic Ocean until October 29, when the storm was predicted to turn northwest and make landfall along the U.S. East Coast.

The Moderate Resolution Imaging Spectroradiometer (MODIS) on NASA’s Terra satellite captured this natural-color image of Sandy around midday on October 26, as the center of the storm hovered over the Atlantic Ocean east of Florida.

Public utilities, local governments, and residents along the Eastern Seaboard braced for the storm, CBS news reported. Sandy was expected to merge with other weather systems and potentially come ashore over one of the most densely populated regions of the United States. The storm also had the potential to produce snowfall in southwestern Virginia and in West Virginia, the Capital Weather Gang said.

By the time it reached the Bahamas, Sandy had already proven to be highly destructive. As of October 26, Sandy had claimed 40 lives across the Caribbean, and the death toll was expected to rise, the Associated Press reported.