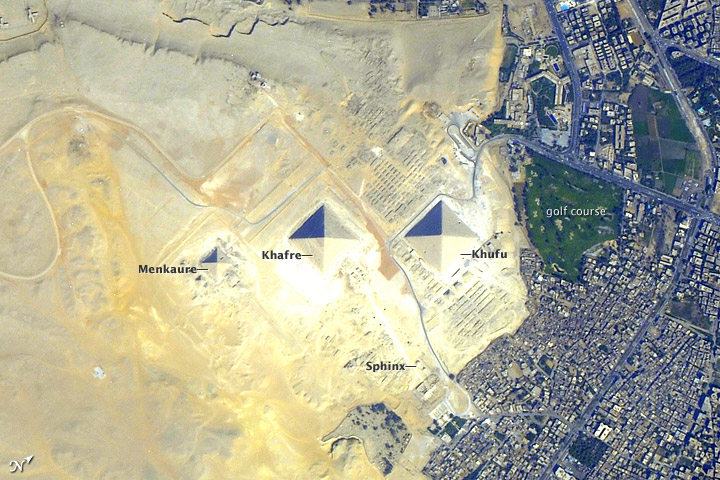 The Great Pyramids at Giza are the last of the Seven Wonders of the Ancient World and perhaps the most famous of the ancient monuments in the Nile River Delta of Egypt. They are also a favorite subject of photography from orbit—particularly when high-resolution imagery can be obtained. This subset of a larger astronaut photograph illustrates the degree of detail visible from the International Space Station (ISS) using a long focal-length lens to provide high magnification. With good illumination of the scene and a steady hand on the camera, current off-the-shelf digital cameras on the ISS can acquire detailed images to rival those of automated satellite sensors.

The southeast-facing sides of the pyramids of the pharaohs Khufu, Khafre, and Menkaure are all brightly illuminated by the Sun, while the northwest facing sides are in shadow. This shadowing also highlights smaller, unfinished pyramids to the south of Menkaure’s pyramid and fields of rectangular, flat-roofed mastabas (tombs) to the east and west of Khufu’s pyramid. While not as grand as the pyramids, mastabas were the burial places of prominent people during the time of the ancient pharaohs. To the southeast of Khufu’s pyramid, the head and rear haunches of the Sphinx are also visible (albeit not clearly).

It is a short distance between the glories of ancient Egypt and the modern Cairo metropolitan area to the north and east. The green vegetation of a hotel golf course (image right) and the numerous buildings and streets of El Giza provide stark contrast to the bare rock and soil of the adjacent desert. Roadways visible in the desert (image left) connect the urban regions to the east with further development to the north (not shown).

Astronaut photograph ISS032-E-9123 was acquired on July 25, 2012, with a Nikon D3X digital camera using an effective 1200 mm lens, and is provided by the ISS Crew Earth Observations experiment and Image Science & Analysis Laboratory, Johnson Space Center. The image was taken by the Expedition 32 crew. It has been cropped and enhanced to improve contrast, and lens artifacts have been removed. The International Space Station Program supports the laboratory as part of the ISS National Lab to help astronauts take pictures of Earth that will be of the greatest value to scientists and the public, and to make those images freely available on the Internet. Additional images taken by astronauts and cosmonauts can be viewed at the NASA/JSC Gateway to Astronaut Photography of Earth. Caption by William L. Stefanov, Jacobs/ESCG at NASA-JSC.

The tombs of the old pharaohs are a favorite subject of photography by astronauts in orbit.