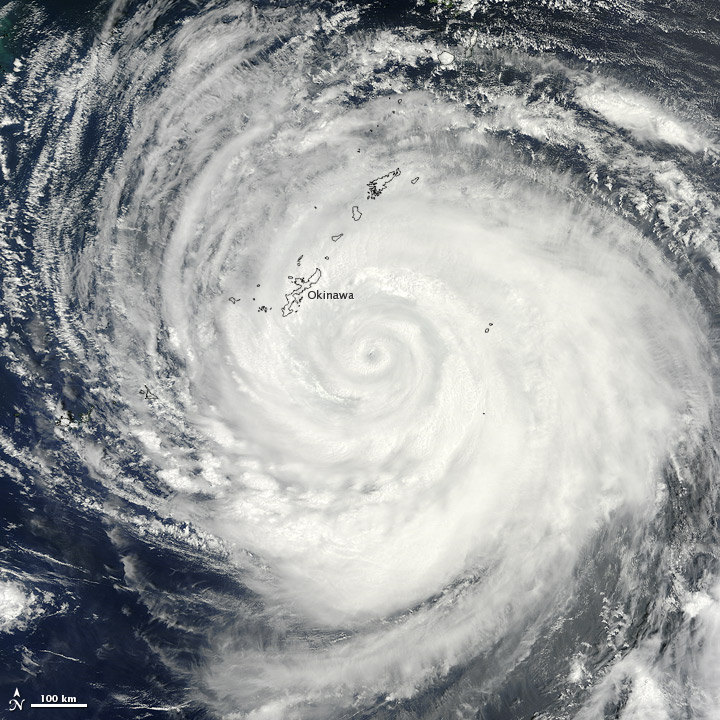 On August 26, 2012, Typhoon Bolaven passed over Japan’s Ryukyu Islands, the eye of the storm making landfall on Okinawa. The Moderate Resolution Imaging Spectroradiometer (MODIS) on NASA’s Terra satellite captured this natural-color image when Bolaven’s eye was situated southeast of the island.

CNN reported that Bolaven was the strongest typhoon to strike Okinawa in nearly 50 years, with winds of 259 kilometers (161 miles) per hour. Along with high winds, Bolaven’s heavy rainfall and storm surges were expected to pose hazards for island residents. The island’s infrastructure, however, is built largely out of solid concrete and able to survive strong storms.

Unisys Weather reported that, on August 26, Bolaven was a Category 4 typhoon with winds of 115 knots (215 kilometers per hour). The storm had weakened by August 27, when the U.S. Navy’s Joint Typhoon Warning Center (JTWC) reported that the storm had maximum sustained winds of 70 knots (130 kilometers per hour). It nevertheless remained a strong storm, and the JTWC projected storm track showed Bolaven passing over the Yellow Sea and the Korean Peninsula over the next two days.

On August 27, 2012, MODIS acquired another image, showing both Bolaven and Tembin off the east coast of China. 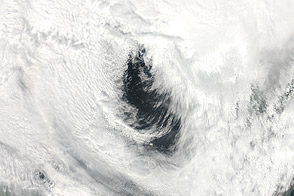 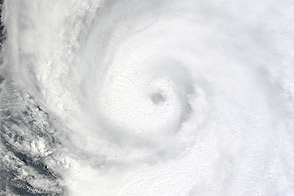 Though still a tropical storm, Molave’s shape is distinctive in this image. Clouds swirl around a dark depression, which marks the eye of the storm.