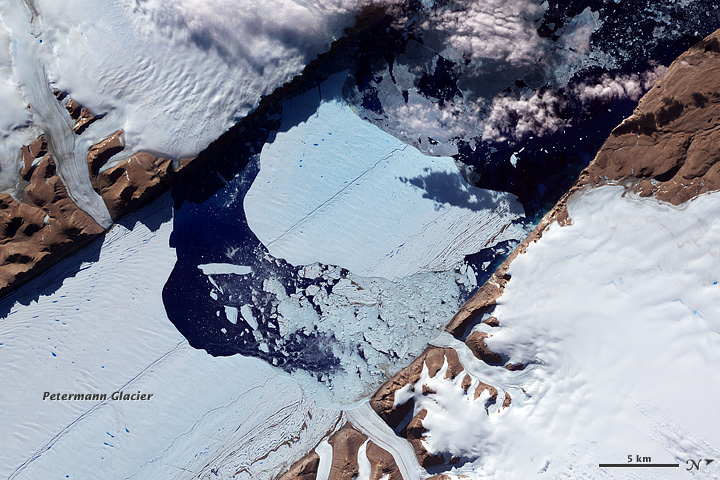 In July 2012, a massive ice island broke free of the Petermann Glacier in northwestern Greenland. On July 16, the giant iceberg could be seen drifting down the fjord, away from the floating ice tongue from which it calved.

On July 21, 2012, the Advanced Spaceborne Thermal Emission and Reflection Radiometer (ASTER) on NASA’s Terra satellite captured this image of the iceberg’s continuing journey. This image has been rotated and north is toward the right. This detailed image reveals that the iceberg covers an area of about 32.3 square kilometers (12.5 square miles).

ASTER combines infrared, red, and green wavelengths of light to make false-color images that help to distinguish between water and land. Water is blue, ice and snow vary in color from pale blue to white, and land areas appear brick red and brown. Clouds in the scene cast dark shadows onto the iceberg surface. Similar surface cracks appear on both the Petermann Glacier and the newly formed ice island.

Nearly two years ago in July 2010, another large iceberg calved from the Petermann Glacier. That iceberg was estimated at roughly 97 square miles (251 square kilometers). This latest calving occurred farther upstream on the Petermann, but nevertheless occurred along a rift that appeared in satellite imagery in 2001.

Ted Scambos of the National Snow and Ice Data Center observed melt ponds on the iceberg surface, but stated that the Petermann calving was likely associated with ocean currents rather than surface melt. 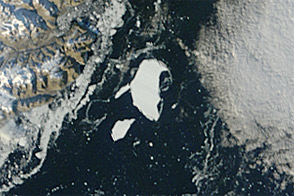 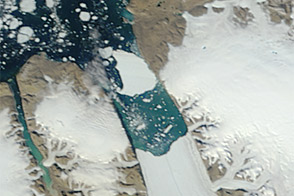