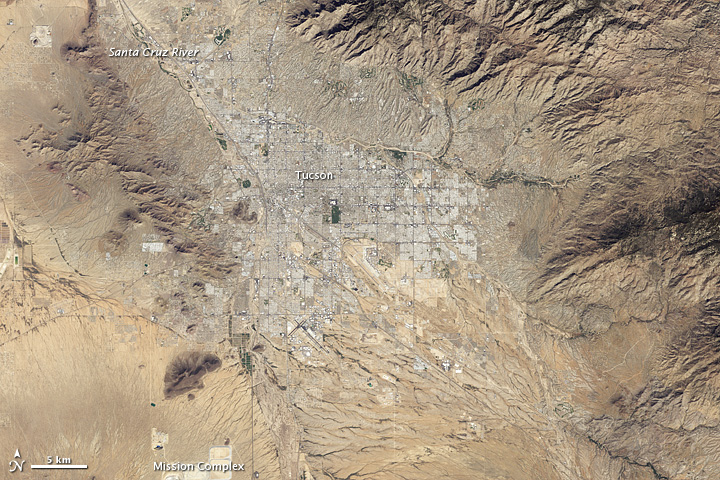 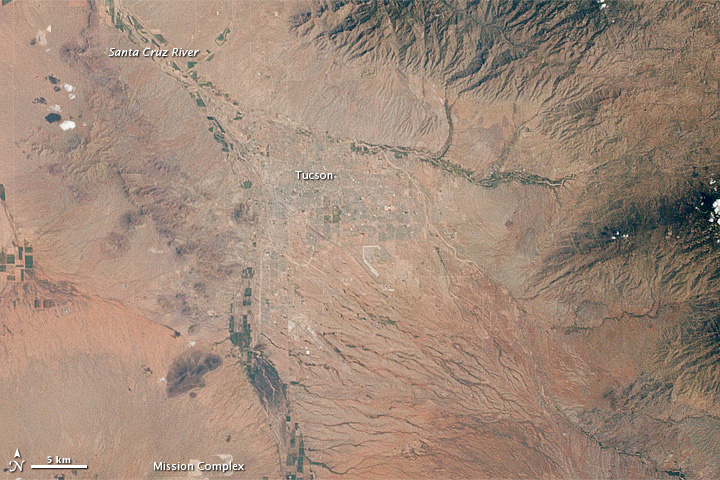 The astronauts who snapped photos of Earth during the Mercury and Gemini missions produced more than just pretty pictures. They planted seeds at the U.S. Geological Survey (USGS) and NASA. In the mid-1960s, the director of USGS proposed a satellite program to observe our planet from above, and later described Landsat as “a direct result of the demonstrated utility of the Mercury and Gemini orbital photography to Earth resource studies.”

On a week-long flight in late August 1965, Gemini V astronauts Gordon Cooper and Pete Conrad took photos of the Earth, including a shot showing Tucson, Arizona, the nearby Santa Cruz River, and cultivated fields along the riverbanks. A lot changed in the 46 years between that photo (lower image) and the satellite image (top) acquired in 2011 by the Thematic Mapper on Landsat 5.

Another difference between the images is the reduction in vegetated areas, especially south of the city and east of the Mission Complex mine. The Gemini photo was acquired in late August, whereas the Landsat image was acquired in late October, so some vegetation might have faded with advancing autumn. In addition, the Tucson region experienced drought conditions in 2011, which also may have reduced green vegetation.

But rapidly expanding cities in the American Southwest (such as Tucson) have another problem: a scarcity of fresh water. Tucson has met its water needs largely by pumping ground water, which has fed the city’s thirst since the 1940s. But as groundwater has been extracted faster than it can be replenished, water tables have lowered, riparian habitats have shrunk, and water quality has declined, according to a water-sustainability study from the City of Tucson and Pima County.

City and county officials were well aware of Tucson’s hydrological challenges by the time Landsat captured the 2011 scene. “Stream flow disappearance due to groundwater pumping, floodplain development, and habitat loss due to erosion have significantly altered the biologically rich and diverse riparian corridors of eastern Pima County,” stated a brochure from the Sonoran Desert Conservation Plan. Efforts designed to restore native habitat include planting native species on county lands, and capturing storm water to restore wetlands. Meanwhile, water-sustainability efforts aim to reduce groundwater-pumping rates. The long-term goal is that, by 2025, groundwater pumping should not exceed natural replenishment.

Read more about the 40-year-old Landsat program and its record of Earth changes in our new feature story: Landsat Looks and Sees.