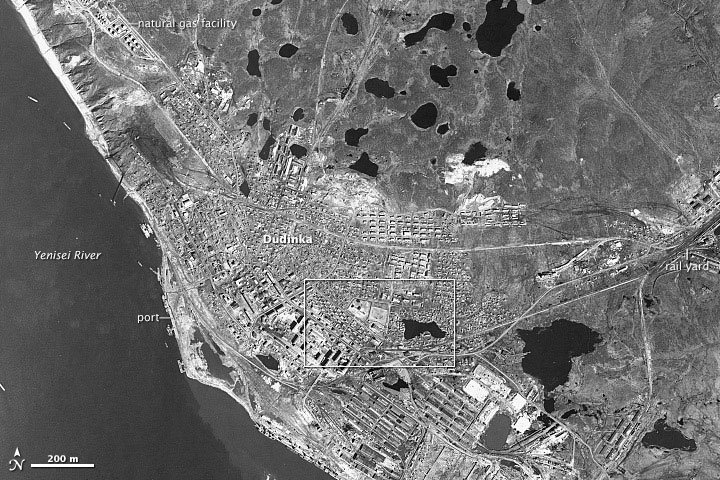 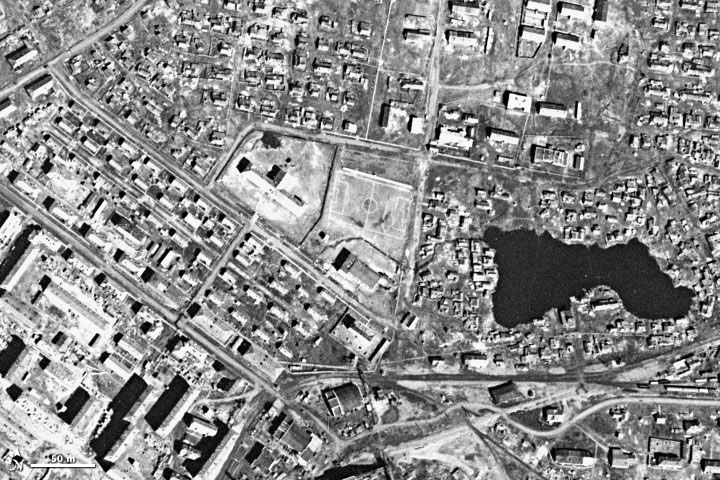 Dudinka, in north central Siberia, lies deep within the Arctic Circle and is one of the northernmost towns in the world. With average annual temperatures of -15 °C (5°F) and six weeks of darkness in the winter, it is not a particularly inviting place to build a town.

However, the proximity of rich mineral reserves in nearby Norilsk, as well as access to the Arctic Sea, prompted the Soviet Union to develop this industrial port town beginning in 1935. Over time, Dudinka grew into a key transportation hub along the Yenisei River. Rail lines connected Norilsk to the port at Dudinka and ever more goods—primarily nickel and palladium—passed through the town as the Soviet Union industrialized throughout the 1940s and 1950s.

In 1966, with Cold War tensions simmering between the United States and USSR, a GAMBIT 1 (KH-7) spy satellite acquired this image of the town. Numerous ships are moored in Dudinka’s port. A conveyer is loading some material, likely ore, from a facility on shore (download the larger image to see this and other details) onto one ship. Just north of the port, what appears to be a gas or oil storage facility is visible. On the western edge of the image, multiple tracks and numerous trains indicate the presence of a rail yard.

At the center of the town, there is a walled facility adjacent to a soccer field (see lower image). The building was possibly military barracks, noted Alex Wellerstein, a historian of science based at the American Institute of Physics who specializes in studying the Cold War.

Beyond its role as a strategic industrialized port, Dudinka likely interested American intelligence officials because of the presence of a nearby troposcatter relay station, a component of a larger military communications network that relies on microwaves to send messages over long distances without wires.

Today, Dudinka continues to serve as a key transportation hub, and it seems poised to grow in importance as warming temperatures make Arctic sea routes increasingly accessible. Ecosystems in the vicinity of Dudinka have changed markedly since 1966, with shrubs now colonizing areas that used to be open tundra.

However, changes to the stability of underlying permafrost have had a major impact on buildings in Dudinka. Human activity—such as releasing wastewater and constructing heated buildings—tends to thaw underlying permafrost, creating pockets of loose, unfrozen soil called taliks that are prone to shifting. More than half of the buildings in the city have been damaged as a result of taliks, according to a report written in 2003 by a Moscow State University researcher.

Declassified GAMBIT 1 (KH-7) satellite image courtesy of the United States Geological Survey. Congratulations to Yiannis Raftopoulos of Harokopio University for being the first to answer the puzzler correctly.

In 1966, a U.S. spy satellite captured this view of a Siberian transportation hub.