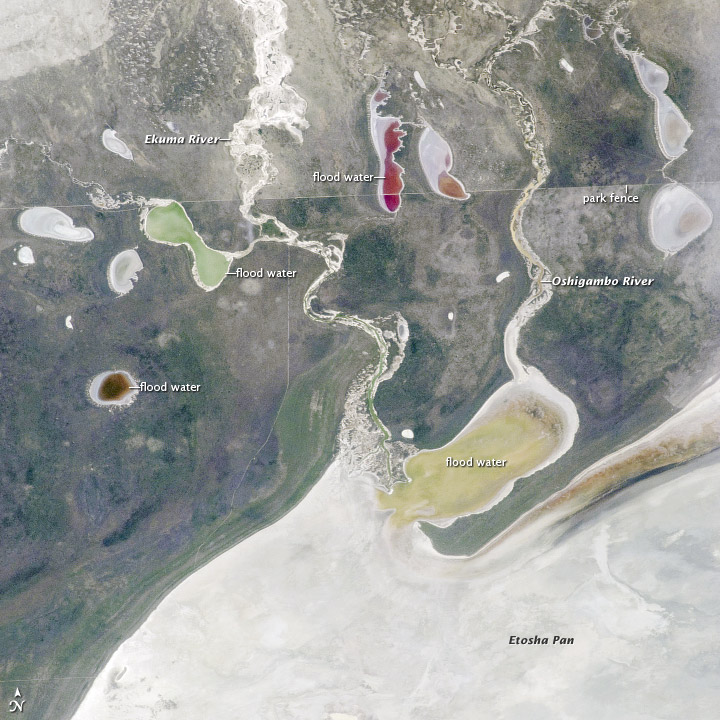 This astronaut photograph shows the white, salt-covered floor in the northwest corner of the Etosha Pan, a great dry lake in northern Namibia. Two rivers, the Ekuma and Oshigambo, transport water from the north down to the Pan. In a relatively rare event shown in this image, water from recent rains has flowed down the larger Ekuma River—which appears as a thin blue line within the light grey-green floodplain—and fills a lobe of the lake with light green water (mid-right). Water has also flowed into a small offshoot dry lake, where it appears a brighter green (upper left).

Other smaller lakes hold red and brown water, a result of the interplay of water depth and resident organisms such as algae. The algae color varies depending on water temperature and salinity. (A similar process is observed in pink and red floodwaters when they pond in Lake Eyre, a mostly dry lake in Australia. In Lake Eyre, researchers know that the color is indeed due to algae growth.)

Typically, little water or sediment reaches the floor of the Etosha Pan because the water seeps into the riverbeds along their courses. The floor of the pan itself is only rarely covered by even a thin sheet of water. In this image, there was enough surface flow to reach the pan, but too little to flow beyond the inlet bay. A prior flood event, when water entered the pan via the Oshigambo River, was documented in astronaut imagery in 2006.

The straight line that crosses the image is the northern fence line of Namibia’s Etosha National Park. This three-meter-high fence keeps wildlife from crossing into the numerous small farms of the relatively densely populated Owambo region of Namibia, north of the pan. The large Etosha lakebed (120 kilometers long, or 75 miles) is at the center of Namibia’s largest wildlife park and a major tourist attraction.

Astronaut photograph ISS030-E-234965 was acquired on December 30, 2011, with a Nikon D2Xs digital camera using a 180 mm lens, and is provided by the ISS Crew Earth Observations experiment and Image Science & Analysis Laboratory, Johnson Space Center. The image was taken by the Expedition 30 crew. It has been cropped and enhanced to improve contrast, and lens artifacts have been removed. The International Space Station Program supports the laboratory as part of the ISS National Lab to help astronauts take pictures of Earth that will be of the greatest value to scientists and the public, and to make those images freely available on the Internet. Additional images taken by astronauts and cosmonauts can be viewed at the NASA/JSC Gateway to Astronaut Photography of Earth. Caption by M. Justin Wilkinson, Jacobs/ESCG at NASA-JSC.

Etosha Pan in northern Namibia is a large, dry lakebed in the Kalahari Desert. The 120-kilometer-long (75-mile-long) lake and its surroundings are protected as one of Namibia’s largest wildlife parks. About 16,000 years ago, when ice sheets were melting across Northern Hemisphere land masses, a wet climate phase in southern Africa filled Etosha Lake. Today, Etosha Pan is seldom seen with even a thin sheet of water covering the salt pan. This astronaut photograph shows the point where the Oshigambo River runs into the salt lake during an unusually wet summer in southern Africa, in March 2006.