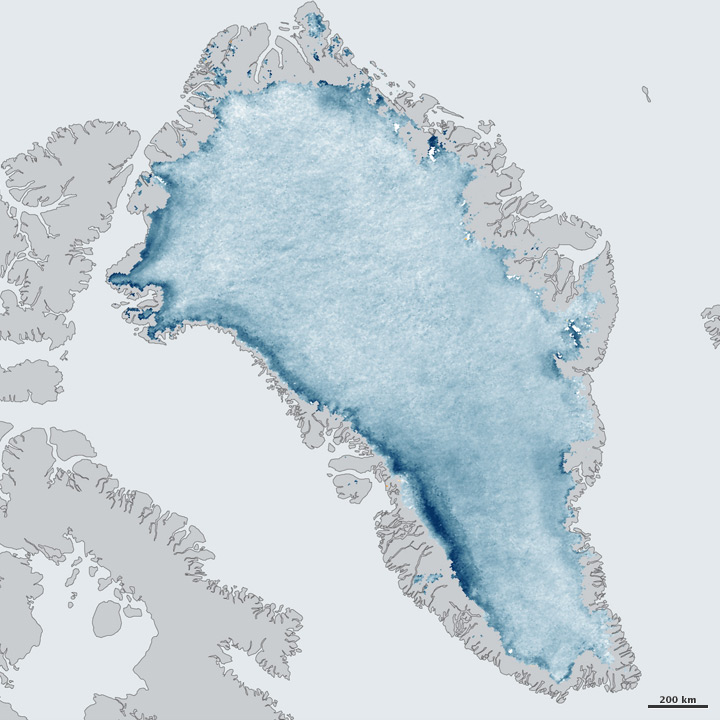 In the past, the bright surface of the Greenland Ice Sheet reflected well over half of the sunlight that fell on it. This reflectiveness helped keep the ice sheet stable, as less absorbed sunlight meant less heating and melting. In the past decade, however, satellites have observed a decrease in Greenland’s reflectiveness. This darker surface now absorbs more sunlight, which accelerates melting.

The map above shows the difference between the amount of sunlight Greenland reflected in the summer of 2011 versus the average percent it reflected between 2000 to 2006. Virtually the entire ice sheet shows some change, with some areas reflecting close to 20 percent less light than a decade ago. The map is based on observations from the Moderate Resolution Imaging Spectroradiometer (MODIS) instruments on NASA’s Terra and Aqua satellites. It was produced as part of the National Oceanic and Atmospheric Administration’s Arctic Report Card.

Most of the patterns on the map fit expectations. Warmer, lower-elevation areas of the ice sheet have darkened more than the colder, higher-altitude interior. Each summer, winter snow retreats from the edge of the ice sheet. Dark pools of melt water form on the surface of the ice, and windblown dust and other particles also collect near the surface, making it even less reflective.

But the darkening in the interior is just as remarkable as the changes at the margins, according to Jason Box of Ohio State University, who analyzed the reflectiveness data. The interior is the high point of the ice sheet, nearly two miles above sea level, and there is no visible melting in the summer. So why is the area becoming darker?

The darkening, says Box, is due to changes in the shape and size of the ice crystals in the snowpack. As temperatures rise, snow grains clump together and reflect less light than the many-faceted, smaller crystals (see lower image from a scanning electron microscope). Additional heat rounds the sharp edges of the crystals, and round particles absorb more sunlight than jagged ones.

Melt ponds on the surface, exposed rock, and changes in snow cover are reducing the reflection of sunlight, causing even more melting. 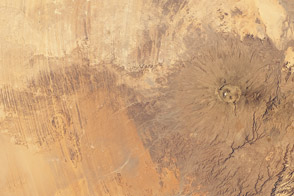