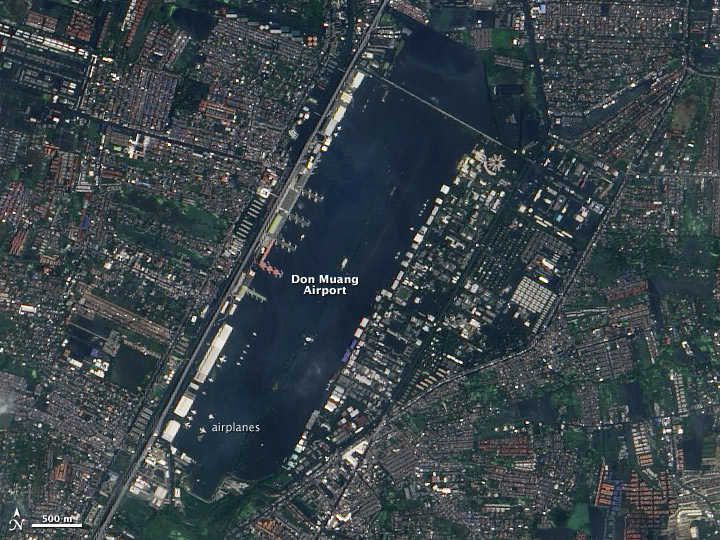 It would be easy to assume, at first glance, that the watery rectangle in the center of this image is a harbor. Narrow structures extend into the blue water like docks; small white dots break up field of blue like ships on water; and the structures lining the area resemble large warehouses.

But on closer inspection, it becomes clear that the white dots are airplanes, and that the watery rectangle is the submerged runway complex of the Don Muang Airport. Located north of downtown Bangkok, the airport is in one of 31 districts affected by flooding in the Thai capital. All 50 districts remain under threat, according to local officials.

The Advanced Land Imager (ALI) on NASA’s Earth Observing-1 (EO-1) satellite took this image of Bangkok on October 29, 2011. Flooding is most obvious at the airport, but much of the area in the image is flooded. The spaces between buildings and under trees are blue. Signs of flooding are also evident throughout the large image, which includes a much wider area.

The floods started in late July as unusually heavy monsoon rains and a tropical cyclone inundated Thailand. Floods swelled rivers and filled reservoirs throughout the country. By late October, the floods reached Bangkok through the Chao Phraya River and numerous canals and smaller waterways. As of October 30, the floods had claimed 373 lives and affected more than two million people, said the government of Thailand.

The Don Muang Airport (also Don Mueang) started to flood on October 25 during a period of high tides. Even as floods were draining into the Gulf of Thailand on Bangkok’s southern shores, high tides pushed back, amplifying the floods. The Chao Phraya reached record levels on October 25, and floods spread across parts of Bangkok. The high tides have peaked, and water levels on the Chao Phraya have dropped slightly. Low tides in the coming days (November 3-15) will give the city time to drain standing floods and prepare for the next high tide, said Thailand’s Flood Relief Operating Center.

The Don Muang Airport, a domestic airport, stopped operations after the runways flooded on October 25. However, the building housed the Flood Relief Operating Center and some 4,000 flood evacuees. The evacuees were forced to leave on October 25, and the Flood Relief Operating Center moved on October 29 when the building flooded. The airplanes shown in the image were decommissioned before the flood. Bangkok’s primary airport, Suvarnabhumi, is still operating and is expected to stay dry.